Ilse Junkermann, the first woman to serve as bishop of the Evangelical Church in Central Germany, called for a 21st century Reformation in which "we should be humans and not God," as nearly 200 people gathered for the Ecumenical and Interfaith Dinner Friday night at General Synod 2017.

Junkermann's appearance coincided with the 500th anniversary of the start of the Protestant Reformation. She spoke out against a culture of "self-redemption and competitiveness" that she said was flourishing in both the United States and Europe. She called for a "transformation," and "a change in our lifestyle," in which we "turn away from perfection and competition" and "say ‘yes' to our own baptism." 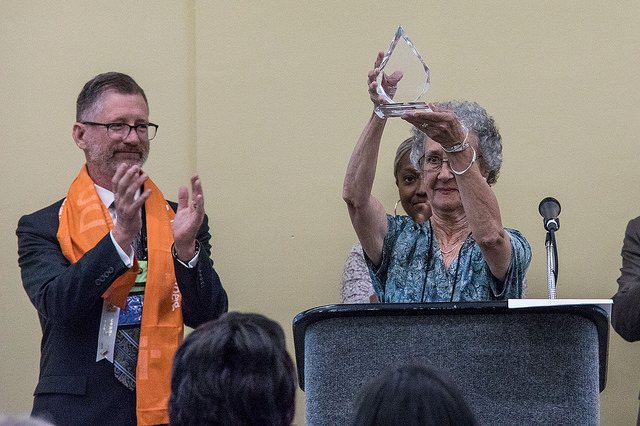 At the dinner, the Rev. Carolyn Roberts accepted the Avery D. Post Ecumenical Award on behalf of her late husband, the Rev. John Deckenback, who served as conference minister of the Central Atlantic Conference before his death last July. Junkermann, Rev. John D. Dorhauer, the UCC's general minister and president, and Peter Makari, area executive for the Middle East/Europe, described Deckenback's efforts to forge partnerships both locally and around the world to pursue social justice goals. Roberts noted that her husband had resisted traveling abroad early in his career, until he had a "life-changing" experience helping to establish a 10-year exchange program between the Northern California Conference and the Soviet Peace Committee when he was on that conference's staff.

Countryside Community Church in Omaha, Neb., received the Divine Pathways Interreligious Achievement Award in recognition of the Tri-Faith Initiative, its partnership with Temple Israel and the American Muslim Institute to build $65 million worth of new worship facilities on land formerly used as a golf course. The award was accepted by the church's pastor, Rev. Eric Elnes, and Moderator Bruce Blanchard.

The dinner was closed with a prayer led by the Rev. Sharon Watkins, who will step down next week after 12 years as general minister and president of the Christian Church (Disciples of Christ) when its General Assembly meets in Indianapolis.