Blackmon to General Synod: Call to justice 'belongs to us all' 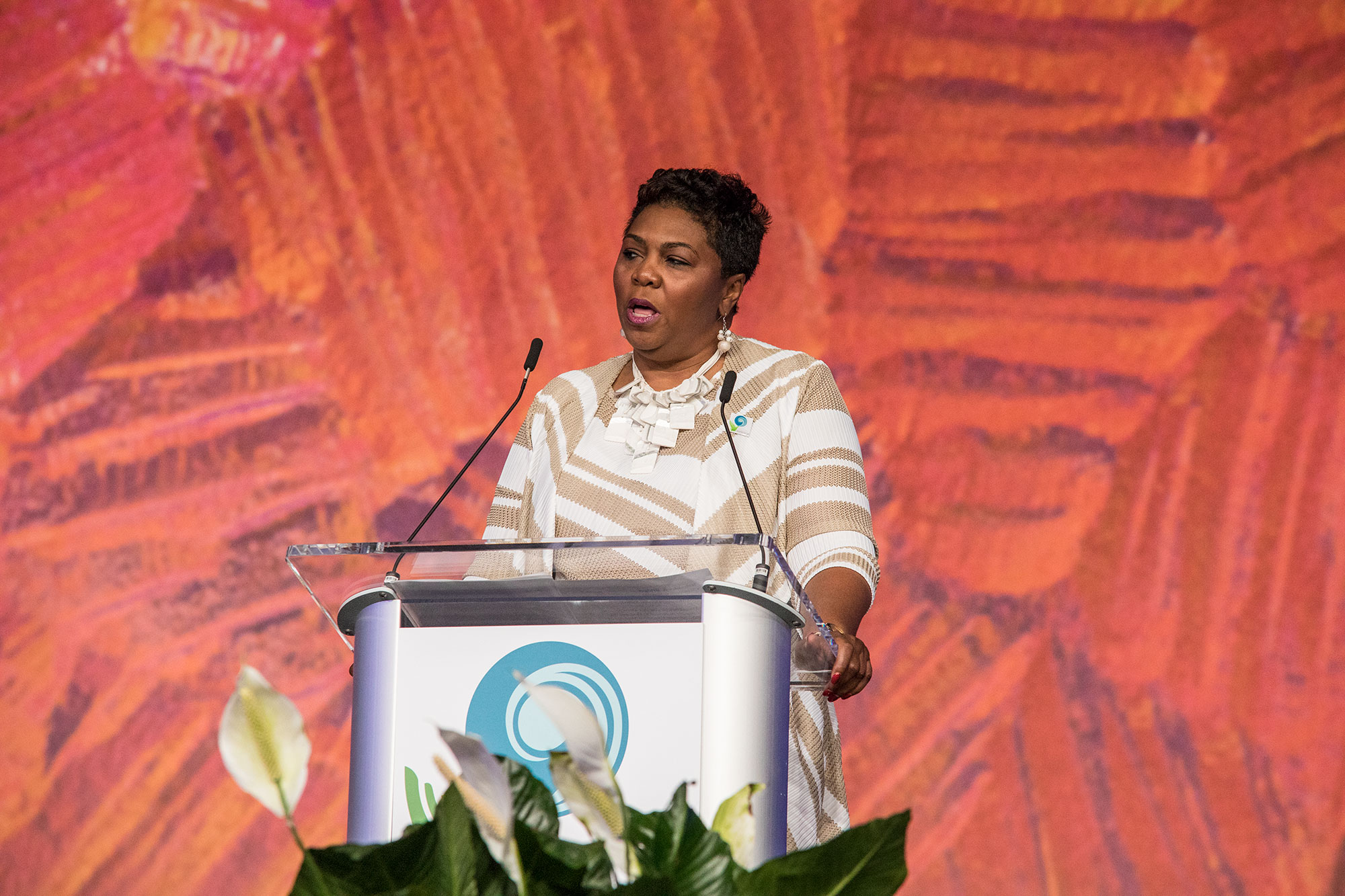 The call to act justly is a call for all.

The Rev. Traci Blackmon, a national officer of the United Church of Christ, has been the acting executive minister of Justice and Witness Ministries since January 2016. On Saturday, July 1, she delivered her remarks to delegates and guests of General Synod 2017 as the nominee for that role — a call that she acknowledged was not solely hers.

"Even as I stand in this moment, I am not alone," Blackmon added. "I stand with the prayers of my family, my friends, and the amazing church I have been blessed to serve as pastor, Christ the King UCC, my conference, the Missouri Mid-South Conference led with grace and gumption by Ginny Brown Daniels…all of whom have encouraged me with prayer and deep love.

"I stand with those powerful preaching women of the United Church of Christ who have come before me, and who have all reached out to encourage me."

Synod delegates will vote on Backmon's nomination for a four-year term on Sunday, July 2. She was nominated by the UCC Board of Directors in March.

The Rev. Starsky Wilson, a UCC minister who is president and CEO of the Deaconess Foundation in St. Louis, introduced Blackmon as "a child of God and prophetic servant, called by the church." He and Blackmon studied together at Eden Theological Seminary.

And while he acknowledged that the church is responsible for ordaining and calling its pastors, Wilson suggested that Blackmon was "ordained through her work in the streets." He spoke about her "more prophetic work she does in radical listening— the service of hearing" she has done at bedsides as a nurse and in the homes of congregants as a pastor. "[She] has capacity to hear in ways I've never seen before."

"Let the church keep up and catch up with what God has already done," he said.

Blackmon brought Synod attendees to their feet more than once during her 30-minute remarks, sermonizing about how a growing church tried to make more space in its racially diverse sanctuary by adding a balcony, but instead led to the church fracturing because of the discomfort with the racial differences.

"I believe justice is possible because Jesus is present, and with every dismantled balcony, the possibility of a just world — a healed world — for all becomes more probably," she added.

Blackmon said she was 16 years old when she first heard God's call. "It was not that I was hard of hearing. I had a translation problem. I was raised in Alabama, where women were rare in pulpits. I did not see what God was calling me to," Blackmon said. But upon seeing a female preacher, she was transformed and her eyes were open to God's call. "I don't want a woman child to doubt that God can call a woman to do what a man does."

Blackmon was the 18th installed and first woman pastor in the 156-year history of Christ The King United Church of Christ, and became nationally recognized as a prominent voice for social change when Michael Brown was shot in Ferguson, just miles from her church in Florissant, Mo. Blackmon immediately got involved in organizing the Black Lives Matter movement, effectively assisting and collaborating with the people in the community working for justice.

Ordained in the African Methodist Episcopal Church, Blackmon served for several years in ministry before stepping in as pastor of Christ The King. She earned a Bachelor of Science degree in nursing from Birmingham-Southern College (1985) and a Master of Divinity degree (2009), with a coursework emphasis in Womanist Liberation Theology, from Eden Theological Seminary.

"[I] prayerfully offer myself to the church for this cause," she said, "knowing, if elected, the position will be mine…But the call will always belong to us all."