Meeting over the Internet on March 27, the United Church of Christ Board took up several matters related to the denomination’s General Synod, including a "behavioral covenant" for the exhibit hall, possible modifications to how resolutions are handled, and the 2021 theme and logo. 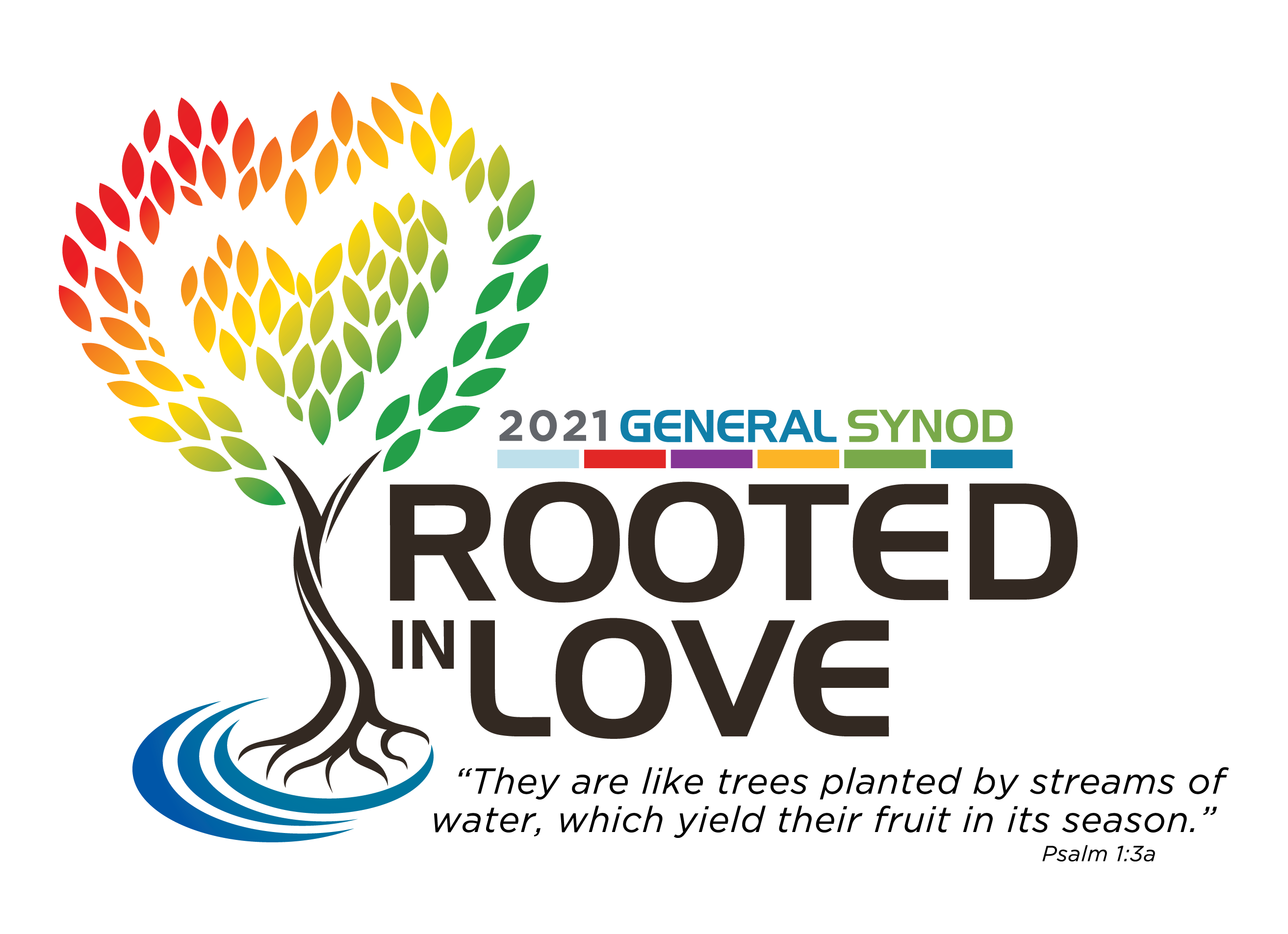 "Rooted in Love," based on Psalm 1:3a, will be the theme of the 33rd biennial General Synod, to be held July 16-20, 2021, in Kansas City, Mo. Featuring a tree and a river, the logo incorporates not only the scriptural theme – "they are like trees planted by streams of water" – but certain UCC values as well, said the Rev. Penny Lowes of Rochester, Mich., moderator of General Synod 33.

"The beautiful image of a colorful tree rooted near living water is a perfect logo for the challenging times in which we find ourselves," Lowes said. "As diverse members of the United Church of Christ, our many roots entwine to give us resilience and strength. Together, we spread our branches of love, offering shades of faith and hope to a weary world. I believe this scripture and image will resonate deeply with the people of Christ as we strive to build a new creation of righteousness through a just world for all."

A 2019 visit to Kansas City by the Synod Program and Planning Committee also informed the logo and theme. "It was immediately noted that the many water fountains Kansas City is known for presented a strong spiritual symbol, a unique local connection, as well as a pathway to engage one of the most pressing creation, justice and spiritual issues of our day: water," said the Rev. Tracy Howe Wispelwey, minister of congregational and community engagement, who will serve as the 2021 Synod's worship director. The logo was created by digital design specialist Steve Liechty with contributions by Cynthia Bailie, director of the Office of Philanthropy, Technology, Identity and Communication.

The discussion of "behavioral covenant" for General Synod exhibitors had its roots in a controversy over a 2017 exhibit that some attendees viewed as anti-LGBTQ. The Michigan Conference brought a resolution to the 2019 General Synod aiming to limit such literature.

The 2019 Synod debated and ultimately tabled the resolution, asking the Board to develop guidelines for future Synods. The Board on March 27 heard a progress report from its Ministry Committee, which is leading the effort to draft a covenant. Board members broke out into small online groups to discuss the key tension that surfaced in the 2019 Synod debate – between the UCC's "extravagant welcome" to all, regardless of theological differences, and the Synod's longtime leadership in promoting not only inclusion but affirmation of LGBTQ people.

The Board agreed to revisit the matter at a meeting to be held later this spring, at a date to be determined. In the meantime, the Ministry Committee will continue consulting with stakeholders, including the Michigan Conference, the Open and Affirming Coalition, and Faithful and Welcoming Churches.

How resolutions are handled

The Board also discussed three proposed changes in how General Synod resolutions are handled, and then tabled them until later this spring. The Board's Governance Committee and its Subcommittee on Standing Rules brought the recommended changes after gathering comments from 2019 delegates in a survey that was also available to the entire church.

One reason the Board delayed its decision on these rule changes was to allow its General Synod Program and Planning Committee time to discern when the implementation conversations would happen at the 2021 Synod – and in what rooms, given its current contract with the Kansas City Convention Center.

After discussing ways to reduce General Synod costs, the Board agreed to continue the discussion on future agendas. Among the possibilities are reducing the meeting's length, currently five days, or its frequency, currently every other year. The motivating factors include the costs to Conferences for delegates’ travel, room and board, and the demands on staff time in the national setting to prepare for and carry out Synods.

No such change could happen before the 2023 Synod at the earliest because of site contracts already in place.

UCC leaders have discussed such possibilities multiple times over the years. The 2011 Synod rejected a proposal to hold the Synod only once every three years. A year later, after further study by a task force, the Executive Council, a predecessor of the UCC Board, decided to make no change in Synod frequency.