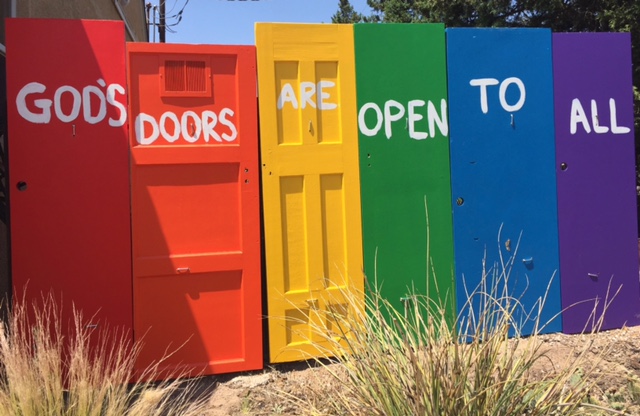 Ask just about anybody in Albuquerque, New Mexico about the church with the doors and they'll know what you mean.

God's doors. Six of them. Bold and beautiful --  with bright colors and a vivid proclamation "GOD's DOORS OPEN TO ALL."

"We stole the idea for the cool doors from Westfield UCC in Connecticut," said the  Rev. Sue Joiner, pastor of First Congregational UCC, Albuquerque, N.M. "I loved them so much and wanted to put them up at our church because we are in such a prominent location." (Next to University of New Mexico and across the street from a local middle school.)

"I wanted something bright and that explicitly says not just Open and Affirming (ONA), but ALL ARE WELCOME AND WE MEAN IT!!! I really wanted to exploit our location and make the message loud and clear to everyone."

This week, that loud and clear message of inclusivity got an exclamation point. A big sign underscoring an extravagant welcome in three languages that reads 'No matter where you are from, we are glad you are our neighbor.' 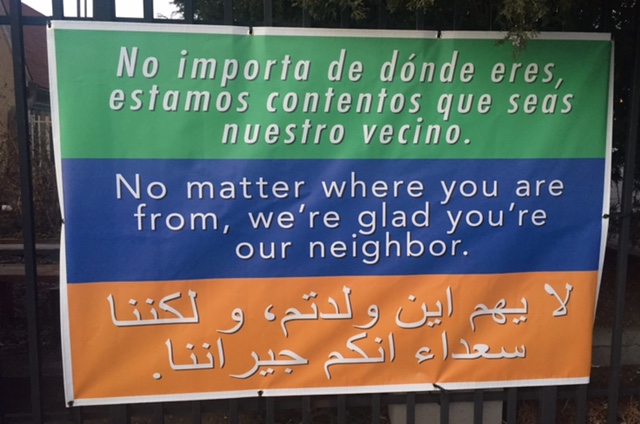 Congregation member Marjorie Musick saw the sign in front of a Mennonite church (on Facebook) and thought First Congregational should have one too. So she hunted one down and ordered it.  "I sort of figured that Sue would go for it," she said. "We are very inclusive and it speaks to our welcoming stance."

"This is a powerful statement of current UCC commitments – both the message of the rainbow doors and the statement of welcome in Arabic and in Spanish," said the Rev. John Dorhauer, UCC General Minister and President. "This is how we roll."

First Congregational, one of the oldest Protestant congregations in the community, takes pride in its diversity and inclusivity. Members held a White Privilege conversation that included adults and the youth group, which Joiner said "was very enlightening." On Saturday, Jan. 28, for its prominent commitment to ONA, the church took the 'OUTstanding Place to Worship' award at the ABQ Pride banquet.

Joiner said since November's election, the church community has gotten even more intentional about "honoring the dignity of each person." The Sunday after the vote, members handed out safety pins in church and added the words "All are welcome and safe here" to the church sign. And, like other UCC churches since the election, it has seen an increase in attendance.

"I feel like we cannot do enough to tell our community and those who are most vulnerable 'we stand with you,'" Joiner said. "We have connected with the Muslim community and have a strong relationship with the Faith Coalition for Immigrant Justice. We are worried about our neighbors who are being threatened by this new administration."

"The amazing thing is that the stronger the rhetoric from the White House, the more communities are bonding together," said Abbas Akhil, former president of the Islamic Center of New Mexico.