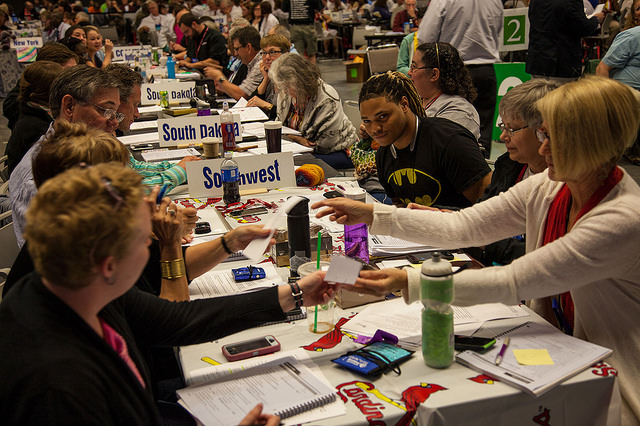 For the time being, the leadership of the United Church of Christ will remain in its current structure. Delegates voted down a proposal to the constitution and bylaws of the UCC on Tuesday, June 30, that would have shifted leadership of the national setting from the current four-person collegium structure to one general minister and president.

In a back-and-forth debate on the floor, and during a hearing two days earlier, it was an argument for flexibility and efficiency against an argument for more time and a clearer process. In the end, the arguments for time and process won out.

Sixty-one percent of the delegates (401 votes in favor, 249 opposed and 23 abstentions) voted in favor of the proposed changes — short of the necessary two-thirds vote. The proposed bylaw change came from the UCC Board of Directors, which approved the measure at its March board meeting, along with a another package of suggested bylaw revisions related to withdrawal rates from endowment funds.

The issues raised by opponents centered around the process of bringing the proposed changes forward— the need for more dialogue and conversation among settings of the church — the model of leadership under one person and the future of Justice and Witness Ministries after the retirement of the Rev. M. Linda Jaramillo in September.

"I do not believe the proposals pass the smell test,” said the Rev. John. R. Deckenback, conference minister of the Central Atlantic Conference of the UCC.

The Rev. Graylan Hagler, pastor of Plymouth Congregational UCC in Washington, D.C., is among those seeking to "have a real discussion so we are all on the same page,” he said. "I don't know what the urgency is."

The Rev. John Dorhauer, the incoming general minister and president of the UCC, said the role of Justice and Witness Ministries executive is too important. "I am going to ask the board in October to hold that position open and find someone to succeed Linda," Dorhauer said.

"I think it's important for us to trust our leaders — our elected officers, our board members,” said the Rev. Cameron Barr, an Iowa pastor. "This takes nothing away from our local churches or judicatories (associations and conferences). Without good management, we can't have good leadership."

The changes would have also done away with designating a specific executive minister for the three covenanted ministries — Local Church Ministries, Wider Church Ministries and Justice and Witness Ministries — and would leave the determination of the number of officers to the General Synod. Changes also included specific language to define the roles of the officers, who would, under the leadership of the general minister and president be responsible for "providing leadership for the mission programming of the [UCC] and for the proper implementation of General Synod actions." The officers are also responsible for researching, planning, evaluating and reporting on the church's ongoing programming.

Among those expressing concern about the consolidation of power in one office, the Rev. Yvonne Delk, the first African American woman ordained in the UCC, voiced her thoughts. "At a time like this, why would we substitute concentrated power for a covenantal relationship?” Delk asked.

While some voiced worry about the leadership of the church reflecting a corporate structure, Iowa pastor the Rev. Ryan Baum reminded delegates "every local church is a corporation,” he said. "A local church has a board, it owns property, and it has a budget. In fact, the definition of corporation is 'body.'"

"Efficiency and order are not the narrative of the United Church of Christ," said the Rev. Donna Schaper, pastor of Judson Memorial Church in New York City. "My biggest concern is not that we solidify our power. I trust these leaders. I'm just not sure the people have felt trust in the process, so I just want to slow down."

For the time being, it appears the church will.