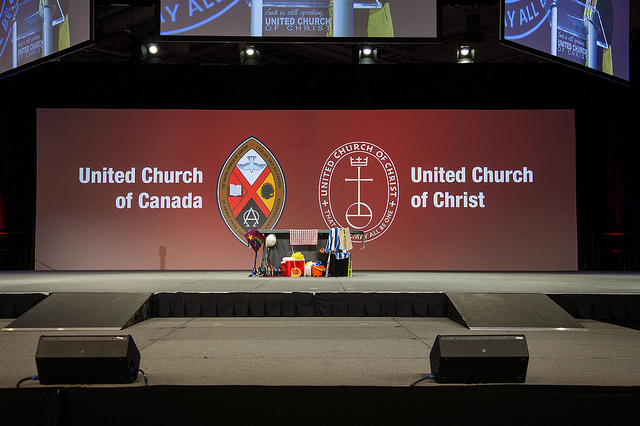 "Let us dare to dream of the unexpected places we might discover as Uniting and United Churches in North America," said Karen Georgia Thompson, UCC minister for ecumenical and interfaith relations, echoing the theme of General Synod 30 in Cleveland June 25-30.

Passage of the amendment on June 29 drew a sustained 45-second applause from delegates, some of whom stood and cheered.

For the Rev. Michael Denton – UCC Executive Board member and Conference Minister of the Pacific Northwest Conference – the vote was cause for celebration.

"We share significant borders with Canada," said Denton, whose conference comprises Washington state, Northern Idaho and Alaska. "This is an opportunity for a cross-border-sharing ministry. Some UCC churches are closer to Canada than any other UCC churches."

"The United Church of Christ and the United Church of Canada are the only two ‘United and Uniting' churches in North America," said the Rev. Geoffrey A. Black, UCC general minister and president. "The two have known of each other, we've worked together and we hold many things in common. But there has been no formal relationship."

A full communion is an agreement for two or more churches to recognize each others' sacraments and the ordination of ministers, allowing them to be called by congregations of either denomination. This is the UCC's fourth full communion agreement and the first for the United Church of Canada, the largest Protestant denomination in Canada with about 3 million members in more than 3,500 congregations.

Both churches have common ecumenical partners and share similarities on their passion for social justice and peace, inclusion of LGBT people and ordination of women.

The churches began a formal conversation in April 2012, when the UCC made a historical visit to the United Church of Canada's offices in Toronto. After a year of study and engagement, six representatives from each church brought a common document to General Council 2015 and General Synod 2015.

Said Bernice Powell Jackson, pastor at First United Church of Tampa (Fla.), "When I was president of the World Council of Churches, I was shocked to find out we weren't already in communion already. I just wanted to add a word of joy and excitement about doing justice together. That is who we are, that is who they are. I rejoice in this moment."