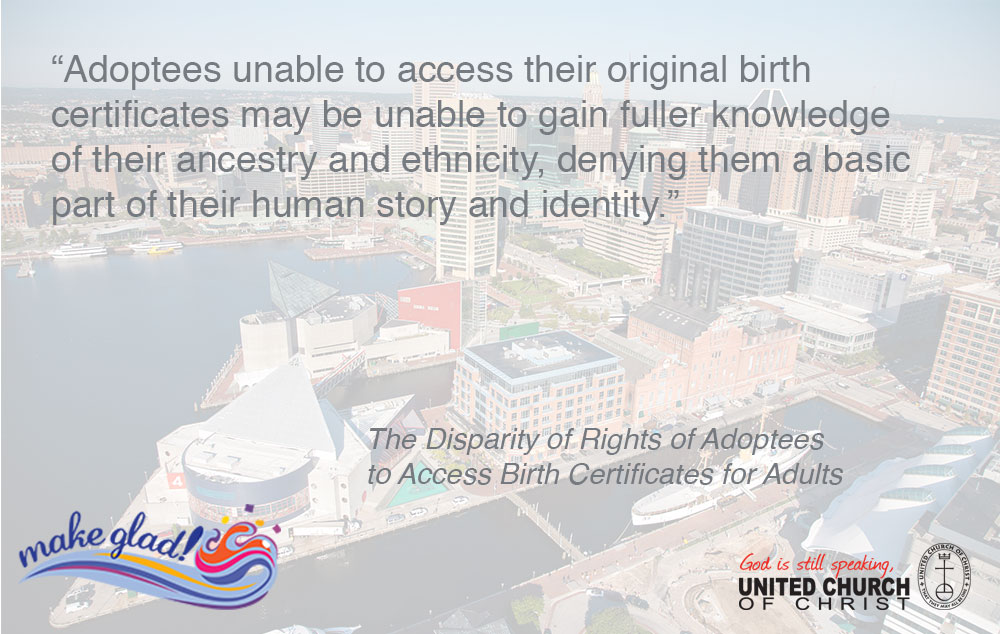 Adoptees sometimes ask the question, "Who am I?" To help them discover part of that answer, the General Synod of the United Church of Christ will consider a resolution this summer that urges states to give adult adoptees the right to access to their original birth certificates.

Brian Donahue, a member of Rocky Hill Congregational church in Rocky Hill, Conn., introduced the resolution — to be considered at the 31st General Synod in Baltimore (June 30-July 4) — to the Connecticut Conference in 2015. He and his spouse are the parents of three children, two of whom they adopted.

"I've never even heard of this issue until the point when my wife went to get the original birth certificates," said Donahue, a social worker advocating on the issue in his free time. "And it stated that we were listed as the birth parents of two our children — and I realized something wasn't right."

The rights of adoptees, and adopting parents, to access original birth certificates vary state by state — only six states (Alaska, Kansas, Maine, New Hampshire, Oregon and Alabama) allow adoptees full access. In Connecticut, the legislature eventually passed a law that allowed adoptions finalized after October 1983 to identify their biological parents — eventually helping the Donahue family discover the ancestry of their two adoptive children. The state is currently considering a law allowing anyone adopted before 1983 to access the same information.

Other states have been unwilling to follow Connecticut's lead — something Donahue and Connecticut Conference Minister the Rev. Kent Siladi believe is necessary to help adoptees reclaim their full identity and learn about their family medical history.

The UCC wouldn't be the first denomination to endorse the issue — the Episcopal Church, the Evangelical Lutheran Church in American and a regional body of the United Methodist Church have approved it.

"There is a lot of support for this — from religious organizations, medical organizations, child adoption agencies and from adoptee families," Donahue said. Among the organizations that are in favor giving adoptees access original birth certificates: American Academy of Pediatrics, American Adoption Congress, the National Association of Social Workers, Concerned United Birthparents, the Child Welfare League of America, the National Foster Parent Association, the North American Council on Adoptable Children and the Connecticut State Medical Society.

"You don't know your family medical history. You're cut off from that without a birth certificate. Medical doctors can't provide comprehensive health assessments without that history," said Donahue. "My children a biracial — they are black-skinned. This is important for race and ethnicity and knowing the answer to 'Who am I?' It's a question adoptees spend their life trying to answer."

The resolution needs votes from two-thirds of the Synod delegates for adoption. http://uccfiles.com/synod/resolutions/GS31-07-Disparity-of-Rights-of-Adoptees.pdf