General Synod resolution on climate fueled by change in U.S. position on Paris Accord 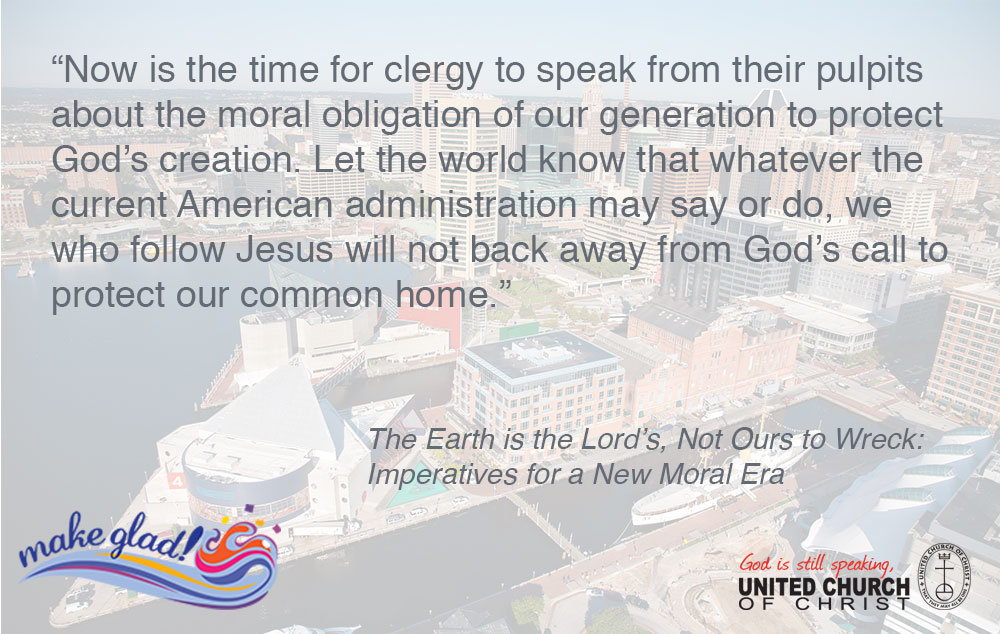 An emergency call to work for a just world for all is coming to delegates of General Synod next week, in the form of a resolution, "The Earth is the Lord's, not Ours to Wreck", which is quickly gaining support from leaders across the United Church of Christ.

This emergency resolution, sponsored by the Southern California-Nevada Conference and supported by 11 others, is in response to the U.S. withdrawal on June 1 from the Paris Climate Accord.

"We were in dismay when the U.S. decided to pull out of the Paris Climate Accord. At the same time, we were not sure how to respond," said the Rev. Felix Villanueva, conference minister of So. Cal.-Nevada. "We began our annual gathering the day after that decision."

With the help of UCC General Minister and President the Rev. John Dorhauer, the Rev. Jim Antal, president and conference minister of the Massachusetts Conference, was tapped to draft the climate resolution.  He emailed it to Dorhauer at the annual meeting where Villanueva presented it to the delegates of the Southern California-Nevada Conference. It passed unanimously.

"The resolution gave voice to what we were feeling at the moment," Villanueva said, "and provided an opportunity to our continued witness and love to God's creation."

Stating "God's great gift of Creation – the context in which all life seeks fulfillment – is in crisis," the resolution calls to preserve it – through resistance to further expansion of fossil fuels, demands for new sources of renewable energy available to all communities. It also charges clergy and communities across the United Church of Christ to put their faith in action, leading by example.

The resolution specifically calls upon clergy to preach about the climate crisis humanity is facing. "Now is the time for clergy to speak from their pulpits about the moral obligation of our generation to protect God's creation," the resolution states. "Let the world know that whatever the current American administration may say or do, we who follow Jesus will not back away from God's call to protect our common home."

"Clergy are among the most trusted leaders who can influence America to do what science says we must," said Antal, a longtime environmental advocate. "Whatever the views of people in the pews, when their clergy take a position, people listen. Advocating for creation is a moral imperative."

The power of the people in the pews is also underscored. "Accepting that it is up to us – we the people – whether in the streets, at the State House, in the halls of power, with our phones and emails, by committing our time, financial resources and prayers – let us pour ourselves out to bend the moral arc of justice, with joy in our hearts, beauty in our sights, and hope for the children."

"We in the South Dakota Conference, learned of the resolution about a week-and-a-half after our annual meeting," said the Rev. Gordon Rankin, conference minister. "However, we felt so strongly that as one of the UCC public faces for the Standing Rock movement this past year that it was important that we add our support to the list of endorsing conferences. For the sake of both justice and congruity we found a way to make it happen."

The South Dakota Conference Board voted overwhelmingly to endorse the resolution, one of 12 that signed on in support of the measure in the span of three weeks. That's more support gathered in a shorter period of time than the 2013 General Synod resolution endorsing both divestment from fossil fuel companies and other strategies such as a way to combat climate change.

The resolution, received prior to the June 9 deadline regarding issues which could not have been anticipated, has already been assigned to a committee.

"We are very proud to bring this resolution to General Synod, thankful to Jim Antal, John Dorhauer, and the conferences that have endorsed it, already," Villanueva said. "It's great to be part of this amazing denomination!"

As the resolution states, "This historic moment provides Christian communities with a powerful opportunity to bear witness to the sacredness of God's Creation and the urgent call to preserve it."