‘It’s within our power to change the damn world’ 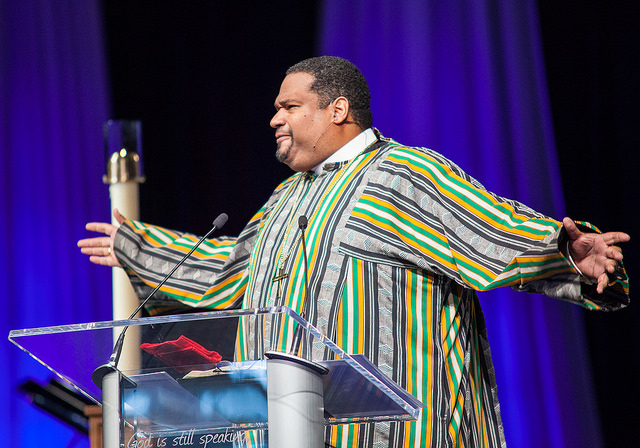 “It is within our power — in this unexpected place at this unexpected time — to change the damn world,” the Rev. Dwayne D. Royster charged the capacity crowd at the General Synod Sunday community worship service at the Cleveland Convention Center.

A mountain of a man, draped in Joseph’s coat of many colors, the bishop of Living Water United Church of Christ in Philadelphia chose to title his sermon Change the Damn World! “I’m not cussing — or maybe I am — but this is a theological statement.

“Far too many people in this country wake up every day feeling like they’re  already living in hell.”

To raise them up, we must “deal with the original sin of this country — racism, slavery and ongoing effects of Jim Crow.”

He chose the story of Elijah’s parting from Elisha at the Jordan in II Kings as his text. Elisha asks for a double portion of Elijah’s anointing, rails against God for taking him, and then picks up the mantle and wields it like a miracle to divide the waters of the Jordan River and return from the dead to the land of the living.

“Just as in the days of Elijah and Ahab, our country is in a deep moral crisis. The issues of race and economic disparity are threatening to tear us asunder. Daily, we are hearing the groans of the people reeling from poverty, oppression, degradation and dehumanization.”

He referred to studies indicating that the deeper the misery of people of color the more the U.S. economy thrives. “Businesses thrive when they extract the wealth from people of color and do not return it to their communities. . .Poorly funded  and broken education systems do nothing more than create a school to prison pipeline.”

He noted that the church is facing these challenges with tools that were meant for previous generations. “Civil rights battles were won, but we were so busy celebrating, we didn’t see the resurgence of Jim Crow, who went to school and got his law degree. . .We need to be reminded that the struggle is against the cosmic powers of authority.”

To pick up Elijah’s mantle and go forward as a relevant church, Royster exhorted the crowd to find four things:

Consecration: “We need to strip away all those things that keep dragging us back into the world so we can hear the voice of the still-speaking God.”

Worship: “We need to worship where we are allowed to have a holy imagination of a better world, a changed world.”

Miracles: “We need to go to a place where we believe God still does miracles. That takes prayer and passion like Bree Ann Newsome, who climbed up the Statehouse in South Carolina and took down the Confederate flag. She said, ‘I’m taking down this flag in the name of God.’ And she did.”

At General Synod 2015, Royster said, the UCC’s Elijah, the Rev. Geoffrey Black, is retiring as general minister and president, and his successor will need a double portion of God’s anointing for the work ahead.

“Every single day the world is getting more complicated and more sinister, and the challenges we face have morphed into something else as we speak.”