UCC votes for divestment, boycott of companies that profit from occupation of Palestinian territories 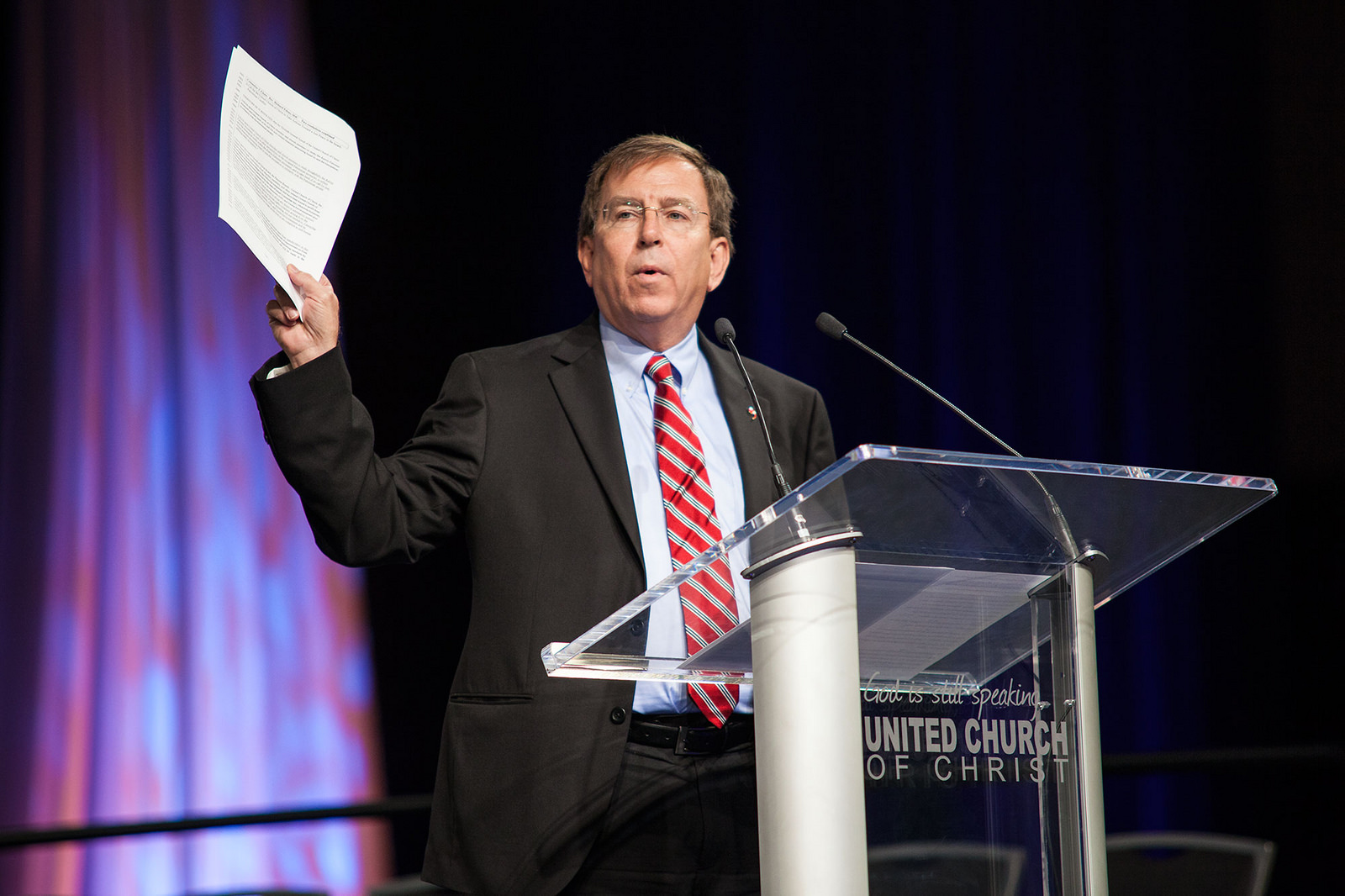 "Never underestimate the power of words." So said the Rev. Bernard Wilson, summarizing the vote by the General Synod of the United Church of Christ, which on Tuesday, June 30, became the latest church to call for divestment and boycott of companies that are complicit in the Israeli occupation of the West Bank and Gaza.

"This allows us to sustain and strengthen our voice against the occupation. It bolsters and supports the work were are doing there, and affirms the authentic voice of our partners, particularly Palestinian Christians in the Kairos Palestine document" said Peter Makari, executive for the Middle East and Europe.

"The conflict between Israelis and Palestinians is one of the most enduring and consequential conflicts of our age," said the Rev. Jim Moos, executive minister of UCC Wider Church Ministries. "Given the injustices and ongoing violence… the resolution calls on the church to engage in specific, nonviolent actions top help end the ongoing conflict and establish justice and peace."

The Just Peace in the Israeli-Palestinian Conflict resolution is aimed at ending the decades-long violence in Israel-Palestine between the two peoples, and asks the church and its entities to be involved in boycott and divestment. The call for divestment, which previously was limited to five companies (Caterpillar, HP, Motorola, G4S and Veolia Environment, and any of their subsidiaries), was expanded to include "any direct or substantive indirect holdings in companies profiting from, or complicit in, human rights violations arising from the occupation." Another change offered an exit strategy for the church to end its divestments or boycotts of companies when they no longer profit from the occupation or cease operations in the illegal settlements.

"We are calling and urging all UCC-related entities to stop bringing wood to the fire of this conflict of human rights," said the Rev. Richard Edens, chair of the committee that recommended the resolution for passage.  "We began with two resolutions, similarly named that came from 10 different conferences. Because they were essentially the same, the committee combined the two as one."

In addition to boycott and divestment, the resolution also calls for study of the Kairos Palestine document, advocating for the Congressional accountability of U.S. aid to the Israeli government and continuing to engage in interfaith dialogue among Jewish and Muslim communities.

The UCC is one of three denominations this week to consider resolutions that, in part, call for an end of the financial support for Israel’s occupation of the West Bank and Gaza. The Episcopal Church and the Mennonite Church are considering similar actions. In 2014, the Presbyterian Church (USA) and United Methodist Church divested from a handful of U.S. companies involved in the occupation, while various Quaker bodies have done the same.

"Passing this resolution is not a cure or an end. It is a beginning," said the Rev. John Deckenback, conference minister of the Central Atlantic Conference of the UCC.

Among those speaking against the resolution, Joanne Marchetto of the Penn-Northeast Conference of the UCC said she was "uncomfortable with how this resolution is presented… This is a great injustice to the land, and I think we need to hear both sides of the argument."

The Rev. Ryan Baum, a delegate from the Iowa Conference reluctantly came forward to support the resolution. "I come from a family of Holocaust survivors. I too have shared the concerns of those who speak against the resolution about the perceived one-sidedness of the narrative," Baum said. "It is imperative not only to hear the two sides, but the many sides of the story. The words of the Rev, Desmond Tutu ring in my head. 'If an elephant has its foot on the tail of a mouse and you say that you are neutral, the mouse will not appreciate your neutrality.’"

"It is clear who the elephant and mouse are in this situation," Baum said.

Just before the vote was taken, the Rev. Jim Antal, conference minister for the Massachusetts Conference of the UCC, asked a favor of everyone present. "I want to urge each of you gathered here [that] if this vote goes forward, you will make a personal commitment to stay in relationship with other rabbis and other people of diverse faiths on this issue," he said "It will be one of the hardest things in your ministry, and for the sake of peace in Middle East, it will be one of the most important."

Later in the day, another resolution focused on the Israeli-Palestinian conflict failed to gain enough votes. That resolution would have made the UCC the first denomination to recognize the actions of the Israeli government in the occupied territories as apartheid.

Of the 607 votes cast, 312 were in favor (51.4 percent) of the resolution, short of the necessary two-thirds majority.

"We acknowledge we have our own sins to confess against crimes against humanity, but that does not absolve us from acting for justice for others," said committee chair the Rev. Bill Lyons of the Michigan Conference, presenting the resolution to the delegates. "A government’s actions does not reflect the whole of its people. We do not condemn all Israelis for the atrocities committed against Palestinian people."