Dorhauer address to delegates takes on issue of white privilege 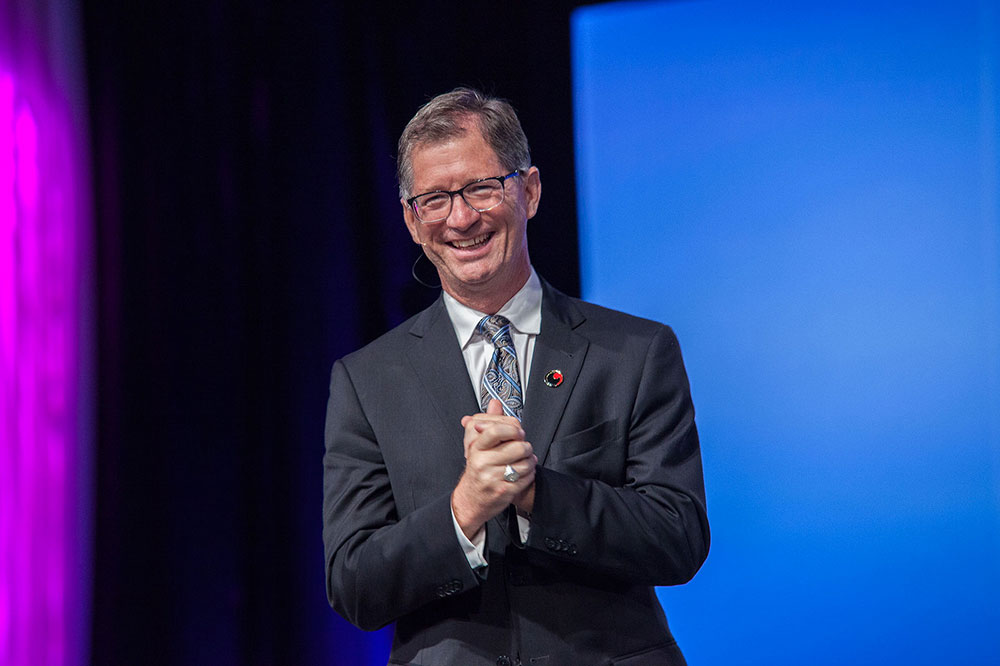 The Rev. John C. Dorhauer grabbed the issue that has clouded his nomination as the next general minister and president of the United Church of Christ — that he is yet another straight white male — and wrestled it to the floor in his nomination speech Friday afternoon at the first business session of General Synod 2015 at the Cleveland Convention Center.

"We are not immune to our possessive attachment to whiteness," he said in challenging the denomination to enter into a time of deep reflection on the effects of white privilege on the United Church of Christ. "Our possessive attachment to whiteness is the biggest impediment to our achieving the vision of Shalom, to our becoming the people of God that we are called to become."

At the same time, he called upon the church "to be adaptive and transformative in our world. It's in our genetic material to build relationships across the divide. We are the people of the still-speaking God … We can make the gospel relevant again and let go of those things that impede our faithful proclamation of that gospel."

Dorhauer said he will present three specific challenges to the denomination if he is elected by the delegates on Monday. "I want you to prepare to fail. I want you to give yourself permission to take risks and then be there to receive the risk-takers with grace when they fail, and to learn from those failures and pass on what we learn to others."

Then, he said, "We will work together to clarify our mission and to commit, with our partners, to fulfill that mission throughout the world. You will perpetuate an aspect of the gospel that, without you, would be extinct.

"Without you, without the United Church of Christ, there would have been no 5-4 decision by the Supreme Court today!"

And finally, Dorhauer asked the church to commit itself to "a little toil of love" which he took from an Emily Dickenson poem. "Overcome the impulse to hate and learn to love."

He concluded with a tribute to the Rev. Geoffrey Black, the current general minister and president of the UCC. "If I can be half the man of compassion that you have been, I will serve the church well."

Dorhauer was introduced by two powerful African-American pastors, who took on the issue of "another white male" in presenting him to the General Synod. The Rev. Damond Jackson of First Congregational Church of Tempe, Ariz., said, "John Dorhauer is a person of privilege in the world we live in, but he has used his white, heterosexual, male power to lift those who live in the world of no-communication, the world of the unheard.

"Here I am, a gay, black male, born and raised in the South, and John sought me out. I love him."

The Rev. Traci Blackmon of Christ the King UCC in Florissant, Mo., said, "We are witnesses on the oppressive fault line of this nation."

She noted that, at the very moment she was speaking, friends were gathering in Charleston, S.C., for the memorial service for the slain Rev. Clementa Pinckney. "This is a nation more liberal with gun laws than with justice."

"We must admit we have some work to do, and I'm confident that John understands that work. He looks at the fault lines that divide us and takes the steps to cross them."

The General Synod votes on the slate of new officers Monday morning.