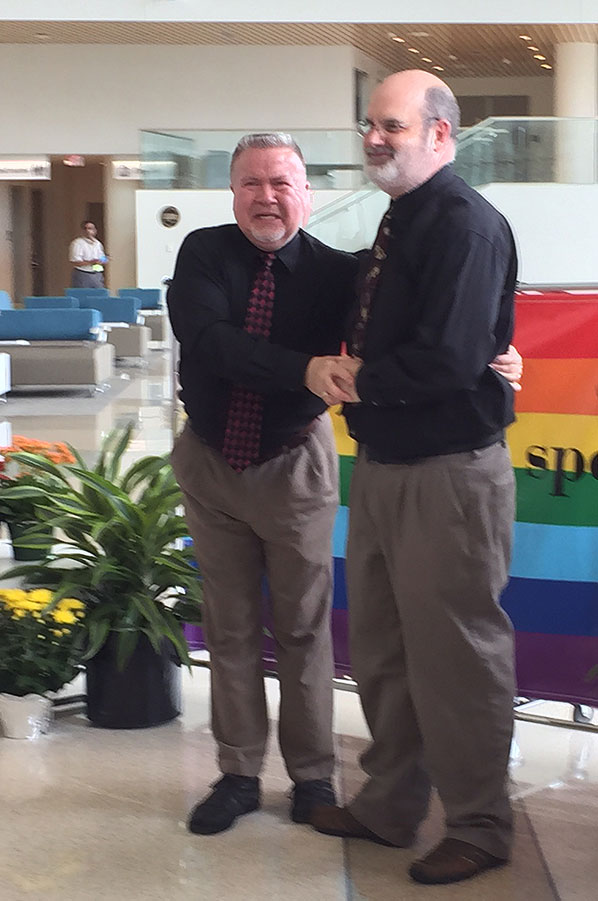 Amid tears of joy, with family and friends close by, the Rev. Rod Mundy and his spouse, Darryl Haase, were married Monday, June 29, in the atrium of Cleveland's Global Center for Health Innovation during the United Church of Christ's 2015 General Synod.

Officiated by the Rev. Kate Huey, dean of Amistad Chapel UCC in downtown Cleveland, the ceremony took place 15 years to the day after their holy union was celebrated at Amistad Chapel by then-UCC president the Rev. John H. Thomas.

The couple could have gotten married before this in another state. But they opted to wait. "We waited for marriage equality to come to Ohio because it was an issue of justice," said Mundy. "We wanted to get married at home, and we shouldn't have to leave our home state to be married, welcomed and equal."

Mundy, a former staffer in the denomination's national offices who now serves the UCC Open and Affirming Coalition, also refused to marry other couples until marriage equality was legalized. "All means all," Mundy said simply. Because of the Supreme Court decision recognizing marriage equality as the law of the land, Mundy has applied for his minister's license to perform marriages in the state of Ohio.

"Today, all of us share in your joy, and we've come together to witness this moment and to ask God to bless you, not just today, but in all the days ahead," said Huey to the couple.

"Rod, Darryl, by the power vested in me by the state of Ohio, and in the eyes of the church as well, I now pronounce you married, spouses for life."

"And now," she said to the congregation, which included the couple's son, Ben, "it is my great privilege to present to you, Rod and Darryl Mundy-Haase."