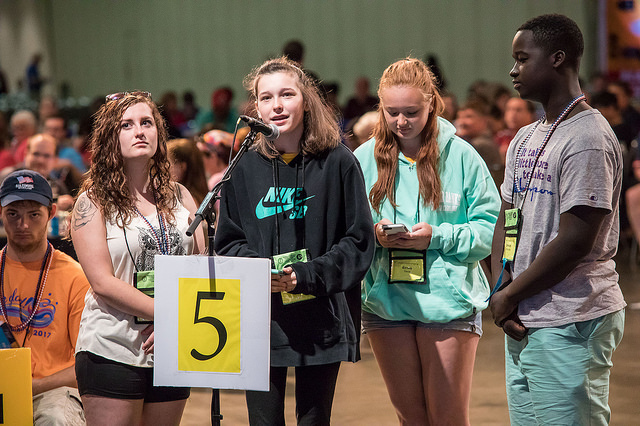 Reminding the denomination that all people are created in God's image, the General Synod of the United Church of Christ called on churches and congregants to "commit itself to disability justice," including advocacy of agreements among nations to protect and promote opportunities for people with disabilities, and to advocate for the rights of migrant farm workers.

Approved by 98 percent of the General Synod delegates on Tuesday, July 4, the resolution "Toward Disability Justice" is, at its core, a guideline for the wider church on how to include persons with disabilities in their ministries and social justice witness.

The resolution calls the church to "points of justice," such as the ADA, access to public education, fair wages and unemployment, police brutality, health disparities, and disaster preparedness—all of which build on what General Synod has spoken to. But it also adds to what it has not—for instance, addressing the U.N. Convention on the Rights of Persons with Disabilities.

Previous General Synods have called the church to support the Americans with Disabilities Act, and to become Accessible to All (A2A) and Welcoming, Inclusive, Supporting and Engaged (WISE) on mental health issues.

The Rev. Matthew Emery, a delegate from the Connecticut Conference, commended those previous actions and stated this resolution continued the church's move towards addressing issues facing persons with disabilities. "So often, when Synod has talked about disability issues and disability justice, the focus has been on what we in the church are doing to make ourselves accessible to all," he said. "This was a unique opportunity for us as a body to place our voice into society on behalf of persons with disabilities and to bolden our witness and not simply consider these issues a question of our churches' internal welcoming and accessibility."

In an earlier deliberation, General Synod also voted overwhelmingly to endorse the Coalition of Immokalee Workers' boycott of Wendy's restaurants. That resolution cited Wendy's refusal over the past 10 years to join the Fair Food program, which has sought to improve working conditions in the Florida tomato fields.

The resolution noted that 14 other major food retailers participate in the program, and have agreed to purchase tomatoes only from suppliers who meet a worker-designed code of conduct that prohibits slavery and sexual harassment, establishes a grievance procedure and provides a penny-a-pound pay raise for tomato pickers.

Some delegates expressed concern that the boycott could negatively impact low-wage workers at Wendy's restaurants and franchise owners, as well as the foundation created by the late founder of Wendy's, to promote the adoption of foster children. But a member of the committee that debated the resolution said its members had discussed those impacts, and observed that unlike some boycotts, "this one was requested by the workers themselves." J.T. Hills, vice chair of the board of directors of the Indiana-Kentucky Conference, also noted that for boycotts to work, consumers need to let retailers know why they are staying away, and encouraged delegates to "let their voices be heard."