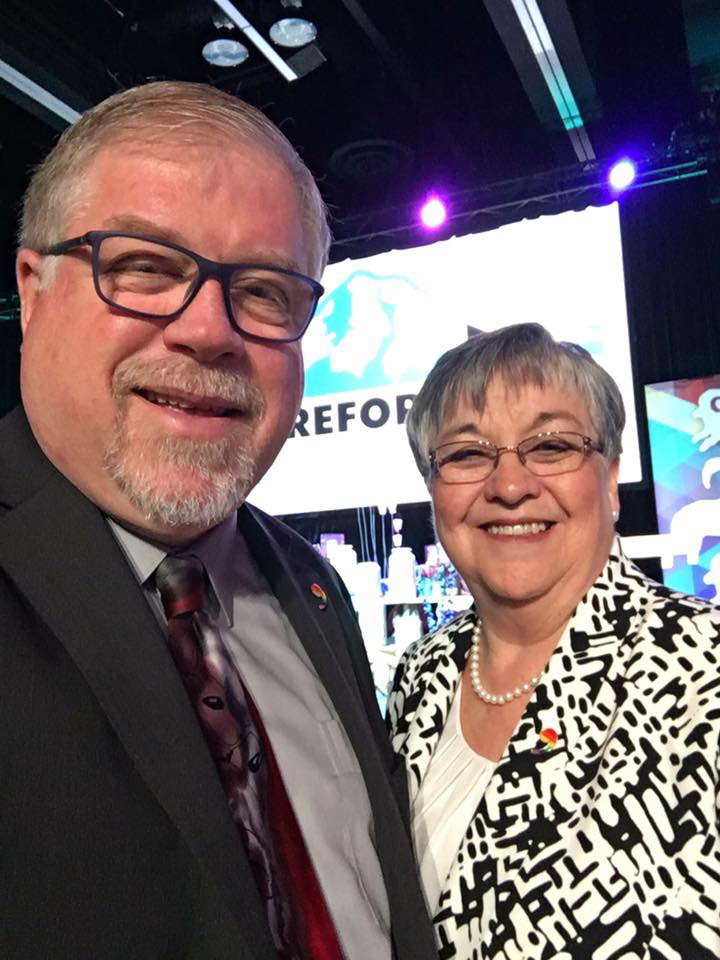 When a former national officer and a conference minister of the United Church of Christ showed up at The United Methodist Church General Conference, both had the same idea. Asked to represent the denomination as ecumenical guests, the Rev. J. Linda Jaramillo and the Rev. Walter John Boris both arrived sporting UCC rainbow comma pins. It's a gesture of solidarity with the LGBT community within the Methodist church, which is facing with issues of inclusion, ordination of LGBT ministers and same-gender marriage as it gathers in Oregon.

"Portland is pretty progressive," said Jaramillo, former executive minister of UCC Justice and Witness Ministries. "There were so many people demonstrating all week in the streets and inside the hall on stage. When Walter John and I showed up, we both had our rainbow pins on… That’s who we are in the UCC, and we are way ahead in the game in terms of denominational support for LGBT people."

The Methodist church is trying to maintain unity despite differences over scripture and sexuality, according to the Protestant denomination's presiding bishop, during its quadrennial General Conference. The latest discussion includes the possibility of a special General Conference gathering in 2018 or 2019 to discuss full inclusion of LGBT people.

Boris, conference minister of the Central Pacific Conference of the UCC, said he typically wears his rainbow pin while visiting local churches or attending ecumenical meetings, and that it frequently provides an opportunity "to explain our support for LGBT community and the United Church of Christ’s stance on continuing revelation. [Wearing the pin] has frequently been the beginning of a conversation about the United Church of Christ. It wasn’t exclusive to the United Methodist Church General Conference, but I did speak with some gay pastors and expressed solidarity with them."

Said Jaramillo, "For us to be there, and to be clear on where we stand, was one thing I felt pretty proud of, and we weren't shy about voicing our opinion when asked."