Forging connections one phone call at a time 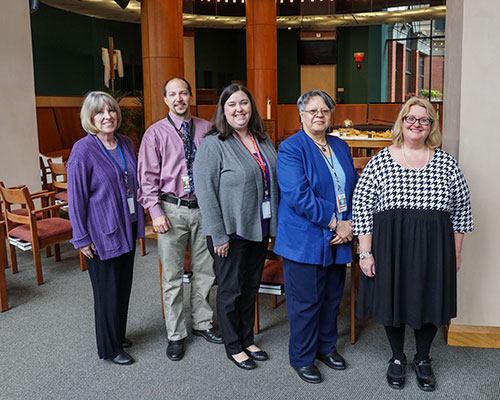 First Congregational United Church of Christ in Reno, Nev., is known as the "Peanut Butter Church"; Berkeley Chinese Community Church is a UCC congregation in Berkeley, Calif., bringing English speaking and Cantonese speaking faith communities together; the pastor of Ebenezer (Stone) Church UCC in Gerald, Mo., is also a chaplain at a local prison; and the pastor of Shalom Comunidad de Paz United Church of Christ in Rockford, Ill., is working as a hospital chaplain and on a master's degree at Chicago Theological Seminary.

"A small but dedicated group of staff spends time on the phone every day, thanking our churches for their service and their witness in their communities," said Kimberly Whitney, UCC minister for Covenantal Relations and project manager for the local church connection project. "The idea behind this is to hearten and inspire UCC congregations, and find ways to share the energy they are generating with such dedication, witness, and passion."

The brainchild of UCC General Minister and President the Rev. John Dorhauer –– launched as one of his first 90-day initiatives –– the project began in November with a team of about two dozen people making the calls. The goal is to connect with all of the denomination's 5,100 local churches before General Synod 2017 in Baltimore.

The "she" Kosko is referring to is Pricilla Bizer, a capital fundraising executive in the Office of Philanthropy and Stewardship and for the Church Building and Loan Fund. First Congregational in Reno is one of 189 churches Bizer has touched base with since just after Thanksgiving. "I think anything we at the national setting can do to connect directly to local church people is a positive action," she said.

"I talked with quite a few church secretaries/office managers/administrative assistants," Bizer added. "ALL of them were friendly, gracious and pleased with the thank-you call. Many said they would share my call with the pastor and the congregation. When I spoke directly with the pastor or a member of the pastoral staff, they, too, were appreciative, and on occasion, surprised. Pastors seem to enjoy talking about what is happening in their congregations and communities."

That connection –– a way to say thanks, to share stories and ideas –– is important. The reference to the peanut butter church is just one of scores of projects the churches are involved in and want to talk about.

"The Peanut Butter Church is a recent development at the First Congregational UCC in Reno," said Kosko. The idea is that peanut butter is portable, high in protein, doesn't need to be refrigerated, and is something we could give to the food bank that is nutritious and pretty portable." The ministry started with folks just leaving a jar of peanut butter in a bag by the front door, but it's taken off in the last year. "As we take the weekly offering, we have a little red wagon where people can add their peanut butter contribution with the offering. We also have a giant peanut butter jar that takes cash donations, so we can buy it by the case. We donate it to the Northern Nevada Food Bank," Kosko added. First Congregational's 190 members have taken in 400 pounds of peanut butter so far this year, with a goal of a ton (2,000 pounds), and they are on track to do that.  "We were just looking for a way to be known," Kosko said, "and that's not a bad way."

"We are connecting with an extraordinary mix of pastors, congregations, lay leaders, office managers, all of us!" Whitney said. She figures the national office team has made 679 calls to date, and needs to call 1250 churches every 4-1/2 months to stay on task to meet the goal.

Kelly McCafferty, an assistant in Human Resources, has called 250 churches –– she wanted to get through her list by summer, so she had a system.

"When I first started the project, I called five churches per day. Looking at my large list, I knew this would take a lot of time. I then set aside an hour a day and called as many churches as I could in that hour," McCafferty said.

"I got a couple surprised reactions –– 'Oh HI!' –– but everyone was very friendly and thankful for our call," McCafferty continued. "People would say they were happy to be a part of this project and felt blessed. I even had a couple pastors tell me they were going to mention our call at the next Sunday service."

Dámaris Vélez, an administrative assistant on the Faith Formation Ministry Team, thought so much of the local church connection project that she offered to call more than two dozen Hispanic UCC congregations. She said her goal has been to contact one church every day, and the people she reached out to seemed both surprised and happy to know the national office is interested in what they are experiencing locally.

"Staff have been inspired by our general minister and president, John Dorhauer, who shared this goal with such commitment and care for the faith communities of the UCC that his vision, really, is fueling all of us." said Whitney. "We hope we convey, through our calls, a spirit of genuine affection and appreciation for UCC congregations and their remarkable ministries across the country."