Fighting for voting rights, Georgia church is among those suing state

Around the time they vote in the March 24 Georgia primary, members of Virginia-Highland Church, United Church of Christ, had also hoped to be face-to-face with state election officials in court. 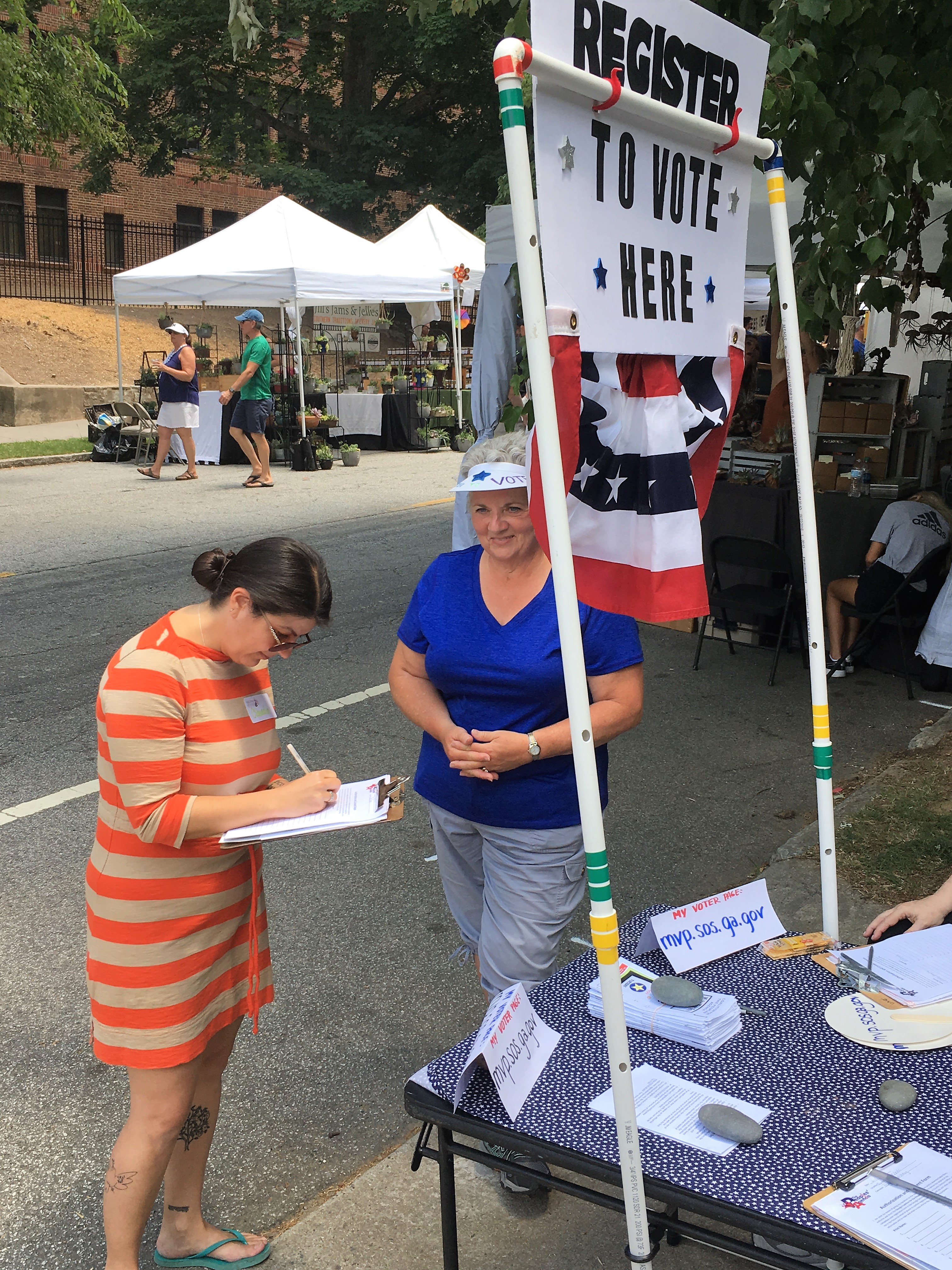 Along with several organizations that care about voting rights, the Atlanta church has sued, alleging the state of Georgia has suppressed votes through an unjust purge of registration rolls and other kinds of mismanagement. A trial in federal district court was originally scheduled for March 23.

But the trial has been delayed – maybe until fall – because the defendants have refused to turn over documents essential to the case, said the Rev. Matt Laney, the church's senior pastor. "It appears to be a stalling technique," he said. "The court made it clear that it does not want any further delays in the proceedings."

Meantime, in an important election year, the congregation is carrying on the long tradition of activism that got it involved in the lawsuit in the first place, including registering and educating voters.

Virginia-Highland was invited into the case, shortly before it was filed in 2018, by the voting-rights nonprofit Fair Fight. That organization's leader is former state representative Stacy Abrams, who narrowly lost a race for governor that year. Also joining as plaintiffs were Atlanta's Ebenezer Baptist Church, where the Rev. Martin Luther King Jr. was once co-pastor; Baconton Missionary Baptist Church in Walthourville, Ga.; a district of the Episcopal Church; and Care in Action, an advocate for domestic workers.

Back then, Laney shared the invitation with Virginia-Highland's Governing Board, as part of a process that also involved having a lawyer review the lawsuit. "As I was describing it to our leaders, they were practically leaping out of their seats to sign on," he said. "This church has been very active in voter registration, in advocating voting rights, for years. We see voting as a sacred right, as a way we express our God-given personhood. This church takes it very seriously whenever someone’s voice is diminished." 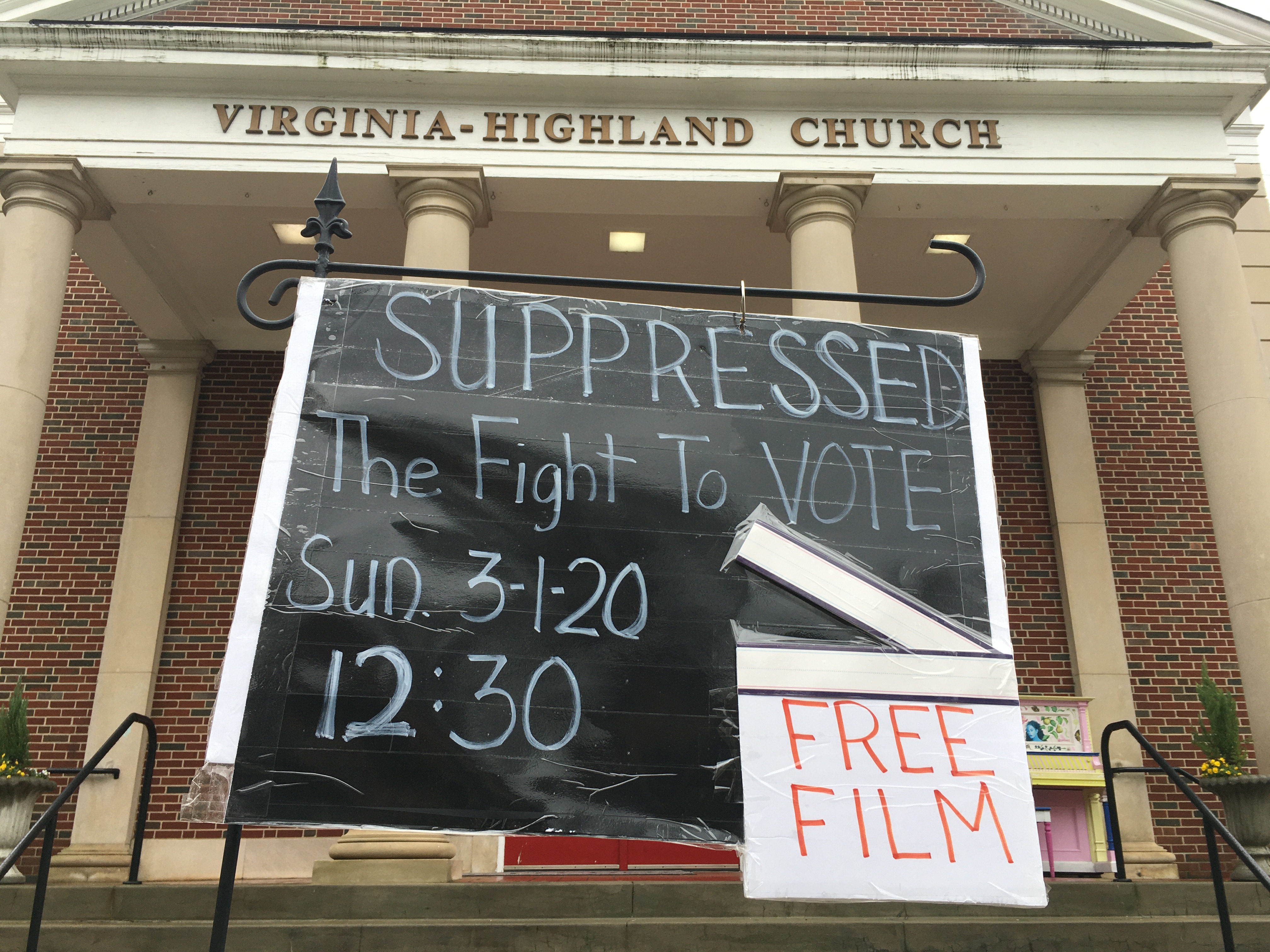 Since signing on to Fair Fight Action et al. v. Raffensperger et al., the church has followed the case closely. Members have attended hearings. "Last year, when there was a motion to dismiss, we showed up to let the judge and the court know that it was ill-founded," said Laney. As part of the legal process, Laney himself had to sit for a deposition, and it wasn't easy. "For five hours I was grilled by the defendants on why the church was a plaintiff and on many aspects of the case."

For now, while pressing the state to release evidence so the case can continue, the plaintiffs are keeping up their activism. On March 1, Virginia-Highland held a public screening of the film, "Suppressed: The Fight to Vote." The 2019 documentary weaves together Georgians' personal stories of voter suppression in the November 2018 election and argues that more of the same will happen. In fact, the current secretary of state's office purged almost 100,000 voters in December 2019.

"I was raised to believe that a good leader takes responsibility for problems, issues and challenges that happen on their watch, like the ones that have been widely documented in Georgia, and work to make things better," Laney said. "The state is doing the opposite. Their approach is to deny, delay and continue to disenfranchise voters in ways reminiscent of Jim Crow."

Nationally, the UCC has worked for years, and especially in presidential election years, to help churches and members know what they can do – in legal, nonpartisan ways – to educate and empower voters. Videos and downloadable toolkits are among the resources available at the Our Faith, Our Vote web page. National UCC leaders on Feb. 17 issued a pastoral letter on the importance of voting.

"Elections matter – whether local, state or national," said Sandy Sorensen, director of the UCC's office in Washington, D.C. "2020 is a pivotal election year. The challenges before our communities, our nation and our world are immense and urgent. Our vote is our voice – it is our way to participate in the common good and to help shape the way we approach the policy challenges before us. Faith voices are an essential and unique voice in the electoral process."