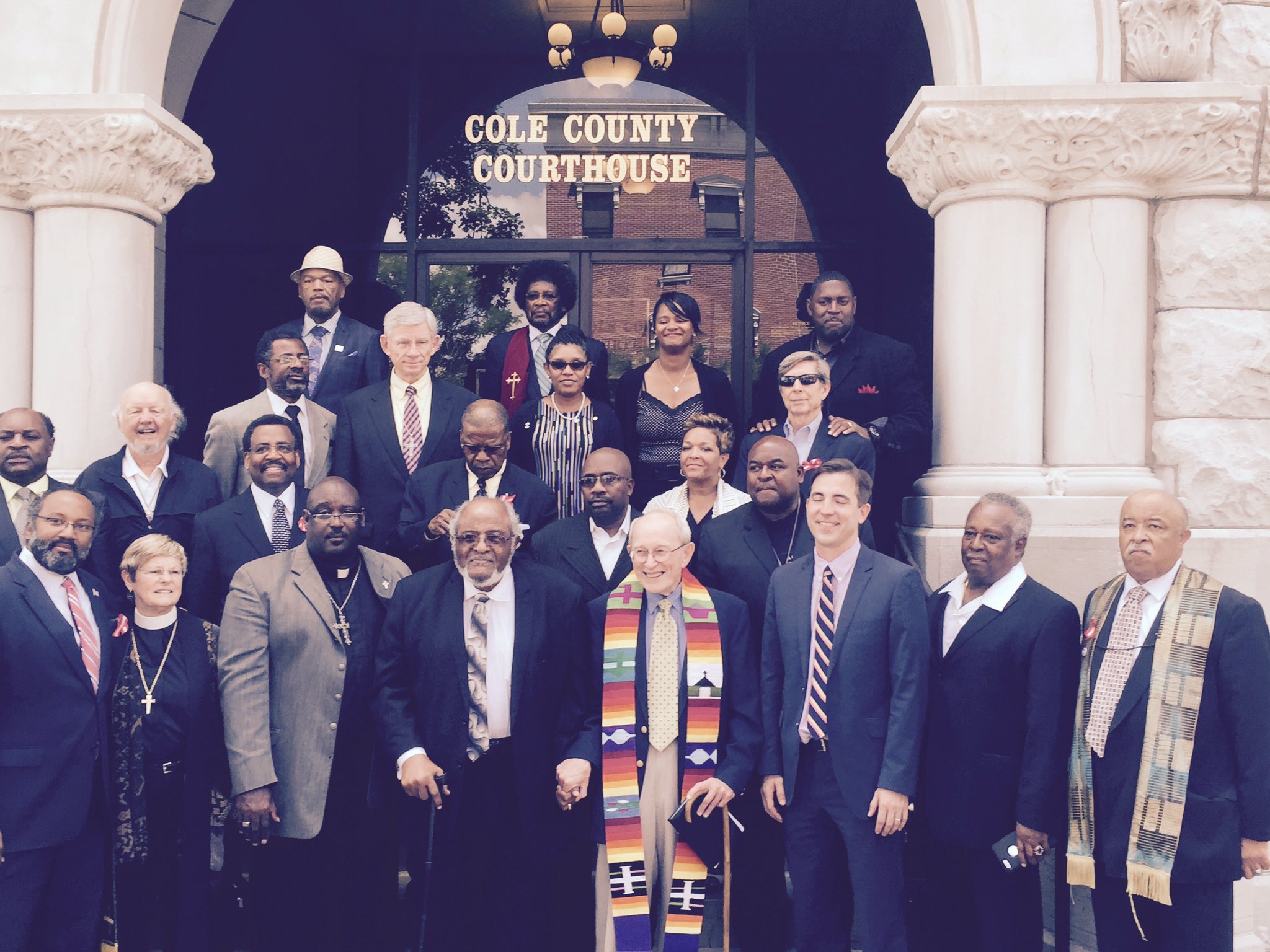 On paper, they were found guilty of trespassing by a jury, and acquitted of obstruction of justice charges. In reality, the clergy were singing and praying inside the state Capitol building in Jefferson City.

A group of nearly two dozen Missouri religious leaders, including a trio of United Church of Christ pastors, faces a yet-to-be-determined fine after they were prosecuted for voicing disapproval of the lack of health care for poor people. The "Medicaid 23," as they became known, risked arrest to object to the state’s failure to expand Medicaid coverage by staging a public protest in May 2014, when they led as many as 300 people in peaceful chants for about 15 minutes from the galley during a Missouri Senate debate.

The Rev. Vernon Howard, pastor of St. Mark’s Union UCC in Kansas City and part of the Medicaid 23, questioned how someone could be charged with trespassing on public property. Fellow UCC ministers the Rev. Chaunia Chandler and the Rev. Sam Mann were also part of the clergy group.

"The First Amendment rights guaranteed by the Constitution were so easily abandoned, and paid no attention to during this trial," said Howard. "It seems the prosecutor believes the First Amendment is only to be applied to persons when they are not inside the Missouri Senate. This nation is founded on protest and public demonstration — it’s one of the main tools for justice."

During sentencing on Thursday, Aug. 18, the group was facing up to six months in prison and a $500 maximum fine. The jury eschewed any jail time and left it to the judge to determine the fine, which he will take under advisement.

The group plans to appeal the decision. "These are 23 clergy exercising their right to free speech and acting on their religious conscience," Howard said. "If we allow that verdict to stay, then what kid of precedent does this set around the country? This is a grave, grave issue."

The prosecutor offered the group two plea deals before the trial, both of which stipulated that the group cannot come back to the Capitol for two years, which the group "resoundingly" rejected, "because it violates the principles upon which we stand," Howard said.

Eighteen of the Medicaid 23 are African American, a point their attorney, Jay Barnes, who is a Republican state lawmaker, made clear during his closing arguments on Wednesday. The trial has been characterized locally as unusual (charges for non-violent civil disobedience such as this are typically dropped by prosecutors) a waste of time and taxpayer dollars, and tinged with racism, according to the St. Louis Post-Dispatch.

Howard said that of an original jury pool of 90 people, only seven were African American, and only two made it to the final jury of 12.

"There were times in the trial I felt like I was in a time machine," Barnes said, "that the government lawyer was 50 years late in bringing this case."

Missouri is one of 19 states that declined expanded Medicaid coverage under the Affordable Care Act; doing so would have extended health coverage to 300,000 low-income people in the state.

"This trial, we believe as people of faith and as part of the UCC, is a witness to how we believe God uses us to elevate the issue of health care in this country. Health care is not a privilege — it is a right of every citizen," Howard said. "What we hope is this will raise the issue across the country, and that we will begin to see that health care should not be determined by profits."

"The poorest of the poor in Missouri deserve the same quality of health care as the legislators and their families enjoy every day," Howard added. "We will be back, and we will continue advocacy."

Said Missouri Governor Jay Nixon, “People certainly have the right to come, to be there in an open public space."