Faith leaders mark anniversary of March on Washington with a D.C. witness on moral values 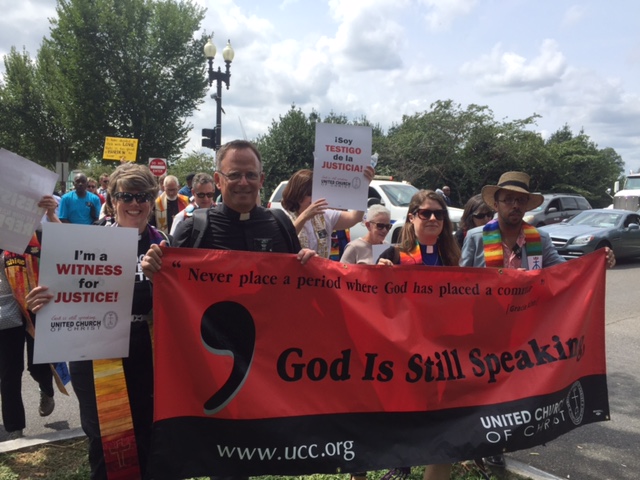 Fifty–four years after the March on Washington and the Rev. Martin Luther King Jr.'s iconic "I Have a Dream" speech, the United Church of Christ was well represented at another call for justice in the nation's capital on Monday.

The "One Thousand Ministers March for Justice" drew more than 3,000 clergy — ministers, rabbis, imams  — and their congregants to the Martin Luther King Jr. Memorial to recommit to the principles he advanced, and oppose the policies of the Trump Administration. UCC representatives, drawn together by the 'God is Still Speaking' banner, marched in the crowd. Those gathered chanted and sang, with signs underscoring the need to be more vocal – about freedoms under attack, about racism and white supremacy.

"This wasn't an anti-Trump rally. This is about our values and who we are as people of faith," said Sandy Sorensen, director of the UCC D.C. office. "In the witness marking the anniversary of the march for justice and freedom, the message was heavily around criminal justice reform and voting rights. We are not wrestling with people — it's about unjust systems we are trying to dismantle. The recent events in Charlottesville, the threats to DACA (Deferred Action for Childhood Arrivals), are waking us up to who we are as people of faith. I thought that was really powerful."

The leaders from multiple faiths, gathering because "the soul of a nation is at stake," said that their protest is not about politics, but about the moral decay of a country under Donald Trump. "As Dr. King marched for 54 years ago, we are still marching for voting rights, health care, criminal justice reform and economic justice," organizers of the event, the Rev. Al Sharpton's National Action Network, posted online.

UCC pastors the Rev. Otis Moss, of Trinity UCC in Chicago, and the Rev. Yvette Flunder, of City of Refuge in Oakland, Ca., joined Martin Luther King III as speakers at the march, which traveled from the memorial to the headquarters of the U.S. Department of Justice.

"I'm really glad we did this march. It was important to be in front of the Justice Department where so many of these decisions are being made," Sorenson said. "We have to keep lifting our voices. We can't grow weary."