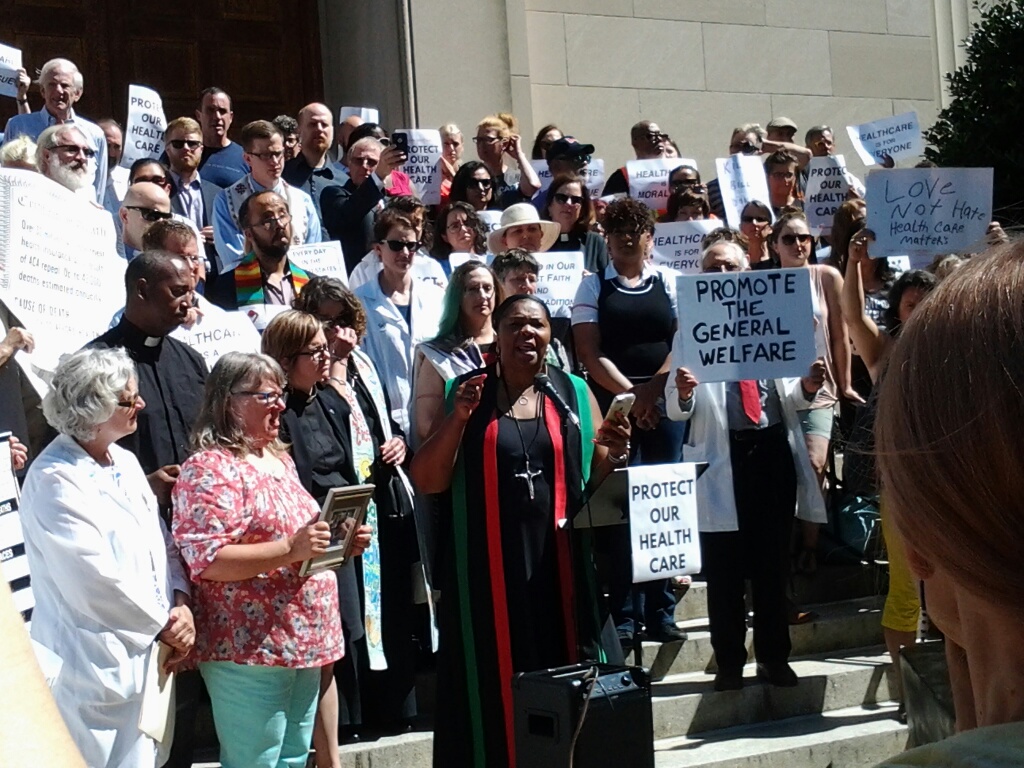 The Rev. Traci Blackmon joined other faith leaders from a number of traditions on Tuesday in Washington, D.C., taking a stand on Capitol Hill for the "human right" of health care for all Americans. Clergy and moral activists processed, as they did on July 13 and again on July 18, not to Senate Majority Leader Mitch McConnell's (R-Ky.) office, but to the Capitol and the Senate gallery to make their voices heard, as the Senate plans to vote July 25 on health care reform.

"The strength of a nation can be measured by the health of its people. A sick people will never be a strong nation," said Blackmon, UCC national officer and executive minister of Justice and Witness Ministries. "This issue is too large for petty politics. Health care is a moral issue. Health care is a human right. We are here because of the cries of the people. We are here to remind you senators of the cries of the people."

The Senate is expected to hold a procedural vote, called a motion to proceed, on health care Tuesday afternoon. According to the New York Times, that vote, if successful, would open the debate on repealing and replacing the Affordable Care Act.

With Sen. John McCain (R-Ariz.) expected back in Washington, D.C., for the vote, despite a diagnosis of brain cancer, religious advocates, Red Letter Christians, Repairers of the Breach, and Faith in Public Life have joined together to take action to stop the Senate's 'Better Care Reconciliation Act' that threatens millions of vulnerable Americans.

Blackmon, speaking to a crowd gathered at the Church of the Reformation (ELCA) before a march to the Capitol, called out the lawmakers' plan of action that jeopardizes health coverage for 29 million people. "You were willing not to act on this egregious piece of legislation until Senator McCain was better. Senators, we are imploring upon to do for America what you were willing to do for your friend. Suspend your vote until what you have to offer the people is better than what we already have. Do not make the American people political pawns. Suspend your vote until what you can provide something us more healthy and does not harm us more."

Leslie Boyd, a member of a United Church of Christ congregation in Asheville, N.C., talked about her son Michael who she said was "murdered by a broken health care system." Her son, born on her birthday in 1974 with a birth defect, had a preexisting condition. So when he left college at 19, he could not get insurance, could not get care he needed and he died at 33. Boyd told the crowd she can't understand how lawmakers considering repealing the Affordable Care Act can consider themselves pro-life. "Jesus sees how we treat people. We can't say, 'I love you Jesus, but I don't care if you die,'" she said. "This is not right or left, this is right or wrong."

With the uncertainty around what will happen next, should the Senate pass a vote to proceed, this group wants their lawmakers to know that they are holding them accountable.

"No matter what time you vote Senators, we will be there," Blackmon said. "We will hold you accountable for every life that is lost, because you are playing politics with people's lives."

Michelle Nealy, communications director at Faith in Public Life, reported that 21 clergy from a number of religious traditions were arrested after they started chanting “kill the bill” in the Senate gallery.

National UCC Zoom call series kicks off with call to prayer Sunday, April 5
April 03, 2020 at 9:31 AM
Commentary: Lockdowns, Social Distancing and Working from Home: A View from the Underside
April 02, 2020 at 2:00 PM
Local Churches Near Me Merchandise & Bookstore Donate