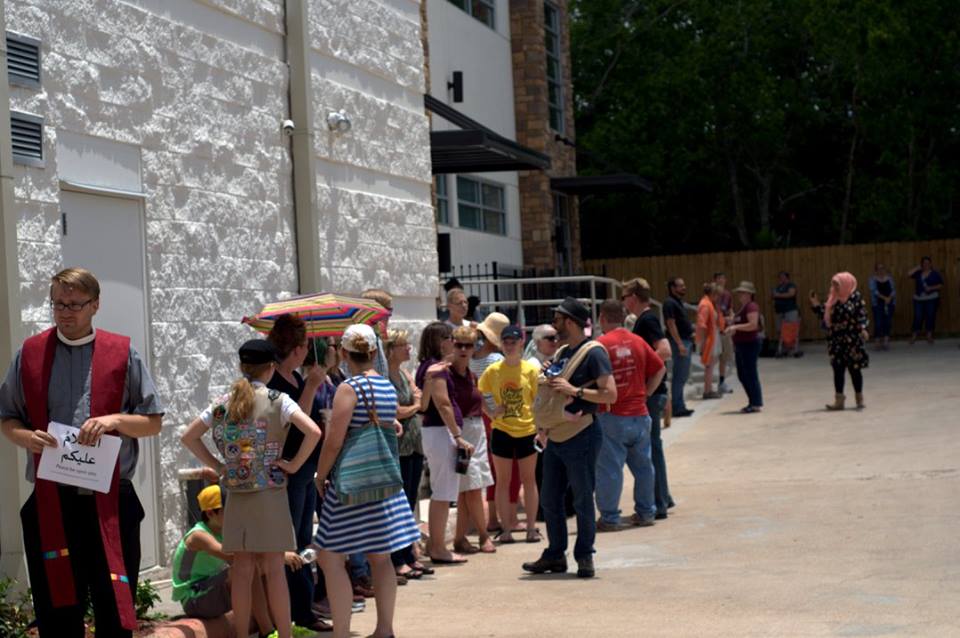 On a steamy Friday afternoon in Texas, nearly 150 people representing a dozen faith communities ringed the Islamic Community Center of Bryan-College Station in a show of solidarity for their neighbors, arriving for prayer. The message, Islamophobia will not be tolerated in our community, rang out loud and clear.

The crowd gathered July 8 at the invitation of UCC pastor, the Rev. Dan De Leon, who was moved to organize the visible witness of support outside the Friday service after shots were fired at the mosque the night of July 6, following the Eid prayer celebration that concluded Ramadan. No one was hurt, but a window, and the community's sense of security, were shattered.

"We're neighbors, and an attack on sacred space, an attack on a home, is an attack on our home," said De Leon, pastor of Friends Congregational United Church of Christ of College Station, Tx. "What impressed and inspired me more than the number of people at the "standing guard" rally around the mosque—about 100 more than I expected—was who the people were. It was an intergenerational, cross-cultural, interreligious, interracial gathering of people who rarely stand in community with each other.  It took an act of violence to our neighbors, shots fired on our neighborhood, to get us to come together.  And when we did, there was so much joy in our fellowship that we hardly minded the Texas heat that afternoon.  In many respects, it 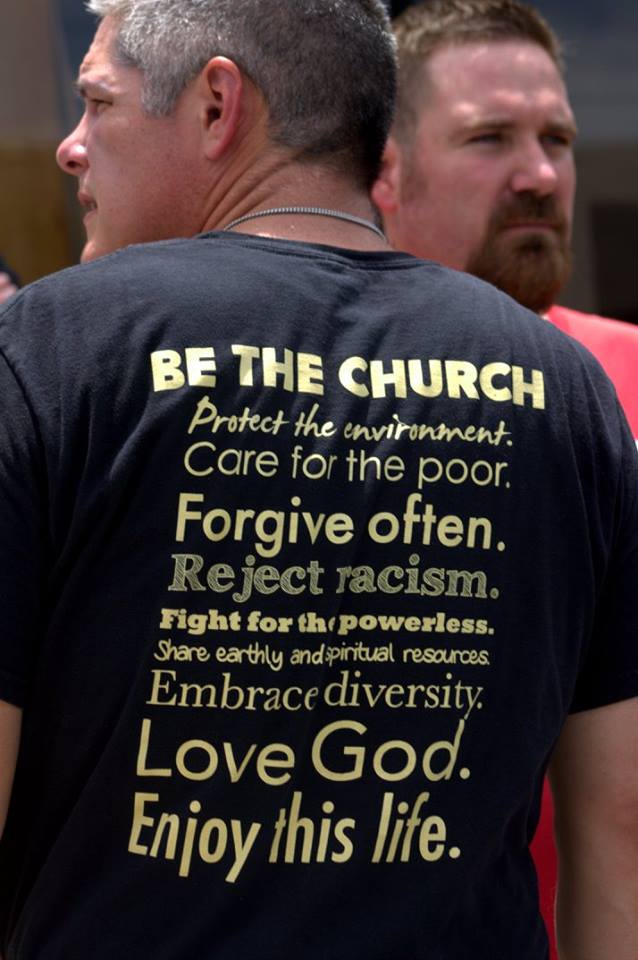 was a twenty-first century Pentecost."

The Muslim community was overwhelmed by the amount of love and support received in response to the hate crime. Nimrah Riaz, a member of the mosque, said Friday, July 8 was "one of the most heartfelt days of my life. I always knew that our community was a good one, but after seeing the 150 individuals who gathered outside the mosque to create a human wall as protection, I knew this community was a blessed one. The amount of love and support we received was so overwhelmingly beautiful. I wish I could have hugged each person that came physically to support, or that sent me messages expressing their support or dropped off flowers, etc. I truly believe there was a lot more good that came out of this incident than the bad that prevailed."

"I was incredibly impressed by the grace, dignity and love of the people who frequent the Islamic Community Center," said the Rev. Karl Tewold, pastor of Faith UCC in Bryan, Tx. "They greeted and thanked us before and after their prayer time. I enjoyed a lot of one-on-one conversations with different people. I was incredibly blessed to participate in this event."

"It's hard to describe the feeling when love is in the air, and as usual when you think you're doing something for someones else, you come away feeling as blessed or more," said the Rev. Ludy Manthei, pastor of St. Paul UCC, Marlin, Tx. "I just hope that this demonstrated to our greater community that we're all in this together."

Zahir Latheef, a board member for the Islamic Community of Bryan-College Station, shared three messages with the crowd after the service when he came out to say thank you— that they will not be moved by hatred, that this incident should foster further interaction, and that the members of the mosque are praying for the shooter. 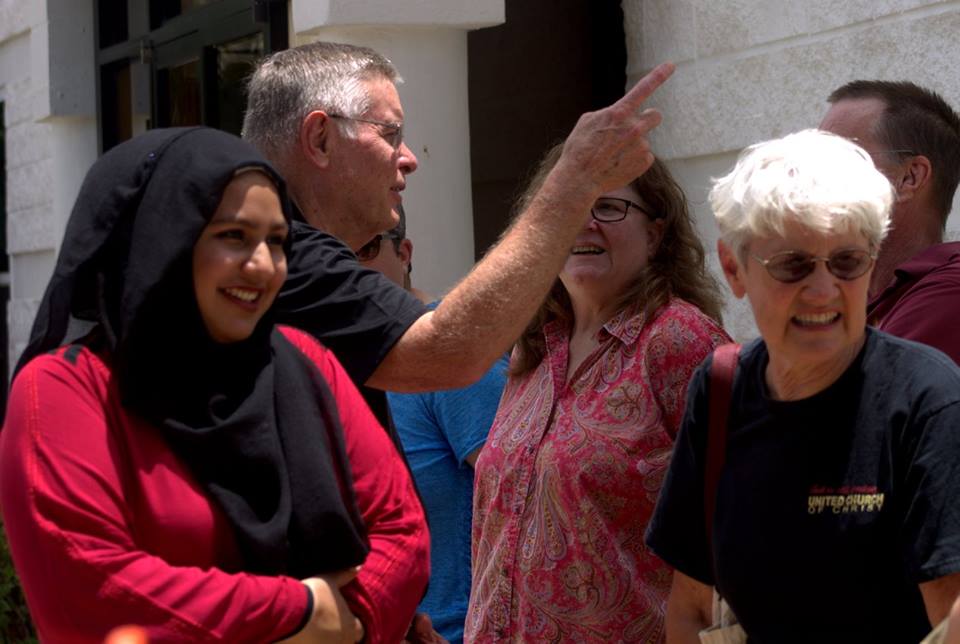 De Leon wholeheartedly agrees. "We need to be far more proactive in generating opportunities for such community in the future," he said. "It should not require another act of hatred to bring us all together.  We need community conversations and fellowship across our societal differences to dispel the alarmist Islamophobia that keeps us from loving our neighbors as ourselves. To stay in our comfortable corners of familiarity and privilege while potential friendships that are waiting to be 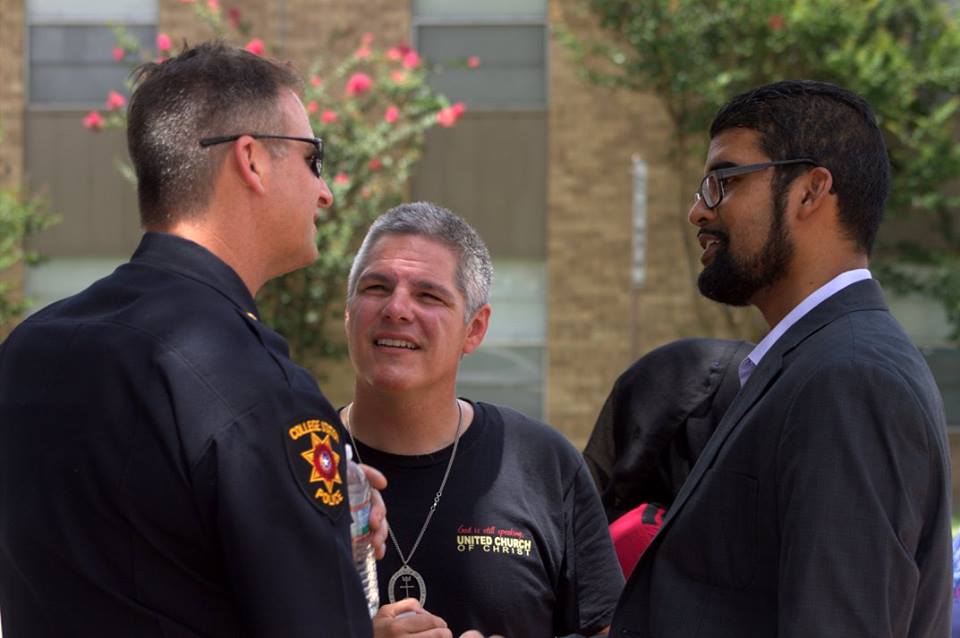 made with those who differ from us remain dormant is to foster indifference."

Latheef shared a message for the shooter: "We hold no ill will toward you. In fact, as our Islamic tradition teaches us, we pray for your guidance, we pray that God guides your heart and replaces ignorance with knowledge, agitation and violence with tranquility, fear with hope and hate with love."

De Leon has this query for fellow members of the United Church of Christ: "If Islamophobia is the predominant message in mainstream media and from far too many pulpits, what is the opposite message that we can be preaching and teaching each other and the world about Muslim-Christian relations, and the urgent blessings of those relationships?"