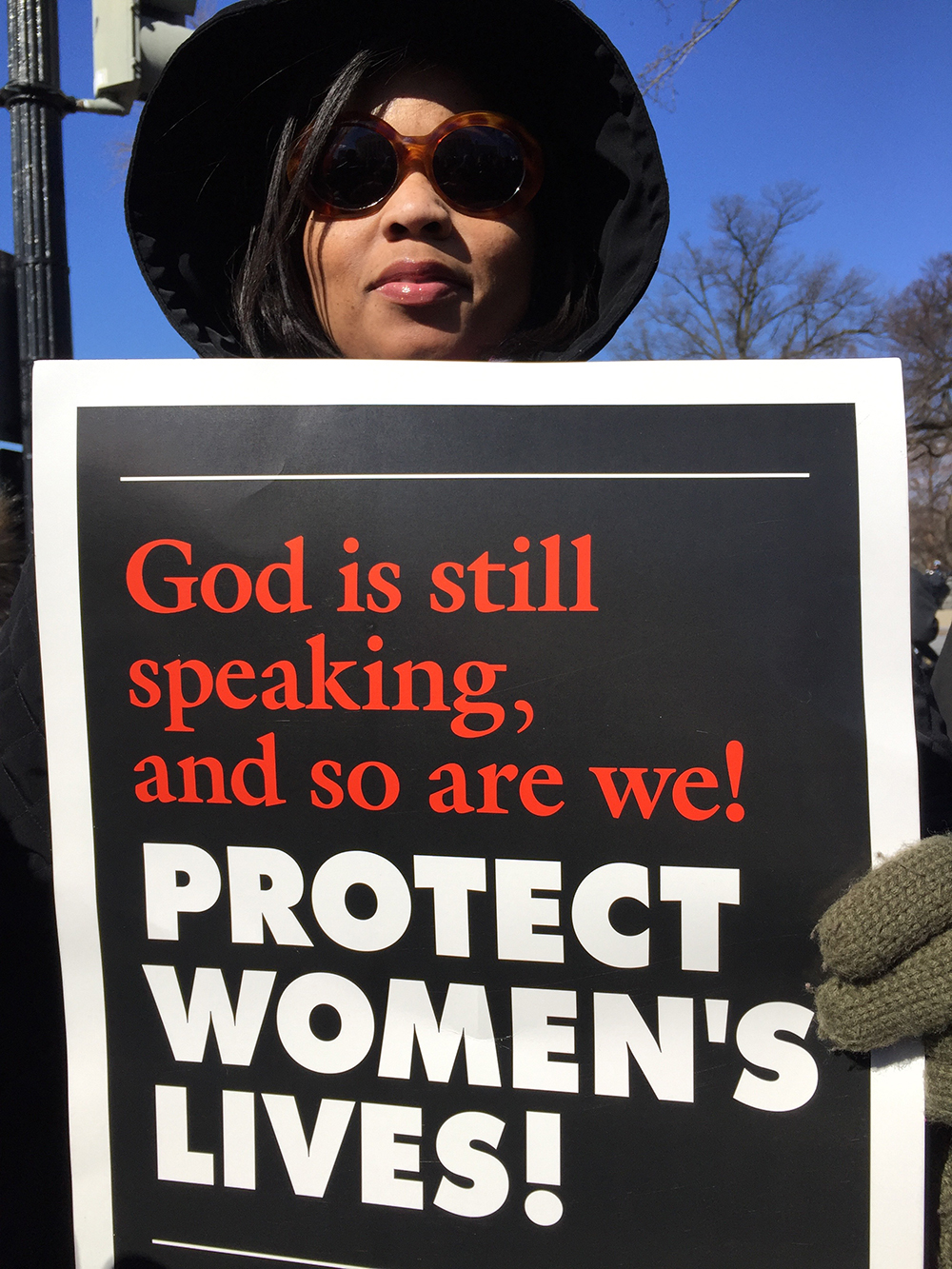 As the U.S. Supreme Court heard arguments today, March 2, in what is considered the most significant case on abortion in decades, leaders of the United Church of Christ joined people of faith and the religious community to rally for the reproductive rights of women and to urge the eight justices to protect abortion access.

Denominational leaders, past and present, supported an interfaith effort of more than 80 religious organizations that affirm the right for women to access safe, legal abortion care. That effort has support from 19 faith traditions, including Catholic, Episcopal, Muslim, Jewish, Lutheran, Methodist, Presbyterian, and Unitarian Universalist communities.

"I want to signal my strong support for the rights of women to have fully funded and readily accessible health care options for all matters relating to their reproductive health," said the Rev. John C. Dorhauer, UCC general minister and president. "I am profoundly disappointed in what appears to be a concerted effort to remove choice and access from women, leaving them with fewer and fewer options. I call upon people of faith, of good will, and of conscience to remain vigilant against all efforts to dismantle women’s health options."

Dorhauer was also one of 1,300 faith leaders to sign an amicus brief — a legal brief to the court from those with an interest to the case, but not a party to it — that argued that "many religious traditions recognize and support the moral right of each woman to make her own decisions about her pregnancy in accordance with her faith and conscience."

The Supreme Court heard oral arguments Wednesday in the case Whole Woman’s Health v. Hellerstedt, which challenges a Texas law that could close more than 75 percent of abortion clinics in the state. But without the vote of Justice Antonin Scalia, who died in February, the court could be evenly divided on the matter, 4-4. That outcome would mean the lower court decision would stand and Texas law HB2 would remain in effect.

The denomination has supported reproductive justice issues since the 1960s, and the General Synod of the UCC has adopted nine resolutions and statements on a woman’s freedom of choice.

After the Supreme Court’s landmark decision in 1973, Roe v. Wade, legalized abortion in the U.S., the UCC has joined with other faith groups to speak in support for women's equal and fair access to abortion and family planning services.

The Rev. Linda Jaramillo, previous executive for UCC Justice and Witness Ministries, said reproductive justice is an issue the denomination has "held strong" since the first General Synod resolution on the topic in 1971. Jaramillo also doesn't want to see social policy shifts that "turn back the calendar 50 years on women’s rights."

"What occurs to me, and what concerns me, is this continual picking away at the right for women to make a choice. Lower courts are limiting women’s choice on such minor things that seem minor, but actually turn into major barriers. The dismantling of Roe v. Wade would be a tragedy for the country," said Jaramillo, who is one of many UCC representatives on the Religious Coalition for Reproductive Justice.

"People may not realize what this limitation could mean. Those most marginalized by financial constraints are the most impacted, because they don’t have access to better care," she said. "The Supreme Court hearings are a way for us as people of faith to step up and call for the rights of women, and for them to make choice about their reproductive health."

A decision on the case is expected sometime before the end June.