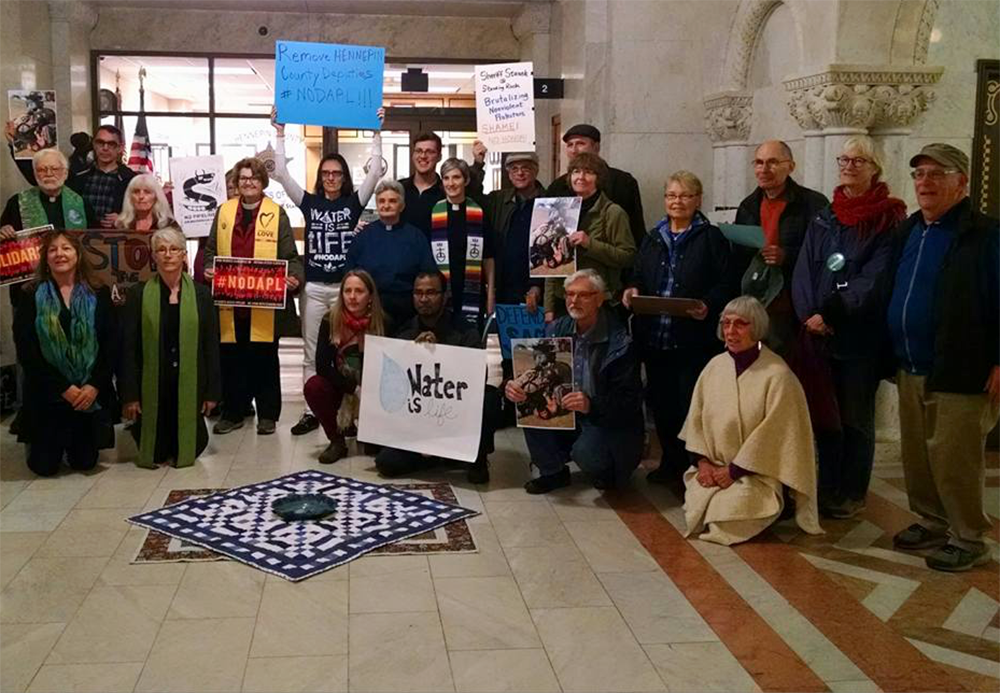 Hundreds of clergy gathered in North Dakota in solidarity with the Standing Rock Sioux Tribe last week, trying to block a pipeline that threatens their water supply and sacred sites. Faith communities elsewhere are also offering support in a different way — by speaking out against law enforcement from other states deployed to the front lines of standoff, and petitioning local authorities to recall their officers.

Large crowds have been encamped in southern North Dakota for months, supporting the Standing Rock Sioux tribe's opposition to the $3.8 billion Dakota Access Pipeline that would run from North Dakota to Illinois. To help control the number of people, officers from seven states (Minnesota, Ohio, Wisconsin, Wyoming, Nebraska, South Dakota and Indiana) have been sent to assist North Dakota authorities.

Minneapolis clergy the Rev. Dwight Wagenius, a member of the UCC Council for Climate Justice, and the Rev. Emily GoldthwaiteFries, a pastor of Mayflower UCC, are two of several local faith leaders who opposed the presence of Minnesota law enforcement at Standing Rock. They were two of 21 people Minneapolis Interfaith Power and Light gathered in a prayer circle inside the statehouse on Monday, Oct. 31.

"We heard a rumor after the end of the vigil that the sheriff had withdrawn the deputies after the vigil began," Wagenius said. "The power of prayer demonstrated."

"We had a good turnout with a lot of energy — UCC, Unitarian Universalist, Evangelical Lutheran Church in America, Jewish, Islam, United Methodist Church, American Baptist," Wagenius said. "It was a true interfaith event with prayer, song — we honored the Minnesota Nobel laureate Bob Dylan by singing 'Blowin' in the Wind' — and story sharing. [At the end], each of us declared that we stood with the Water Protectors of Standing Rock."

Wagenius said that MNIPL specifically sought to speak with the Hennepin County Sheriff to ask him to recall 30 deputies and equipment sent to Standing Rock.

"The withdrawal happened as a result of the community organizing and legislators' pressure," Goldthwaite Fries said. "The Sheriff said 'their duties have been fulfilled', but their original contract was through Nov. 2 and they are home as of Nov. 1. This is a huge success story."

In addition to clergy presence and prayer vigils, people of faith are circulating letters and petitions to state leaders expressing their concern. One such petition in Ohio has support from more than 45,000 people calling on Gov. John Kasich to recall 37 state troopers sent to North Dakota. Ohioans held a rally at the statehouse in Columbus on Friday, Nov. 4, protesting Kasich's use of the troopers in another state.

"This is an important way in which any person who opposes the DAPL can join in solidarity," said the Rev. Brooks Berndt, UCC minister for environmental justice. "This has already been a highly militarized situation. I invite the wider church to sign and share the petition as a gesture of witness and solidarity to demilitarize Standing Rock."