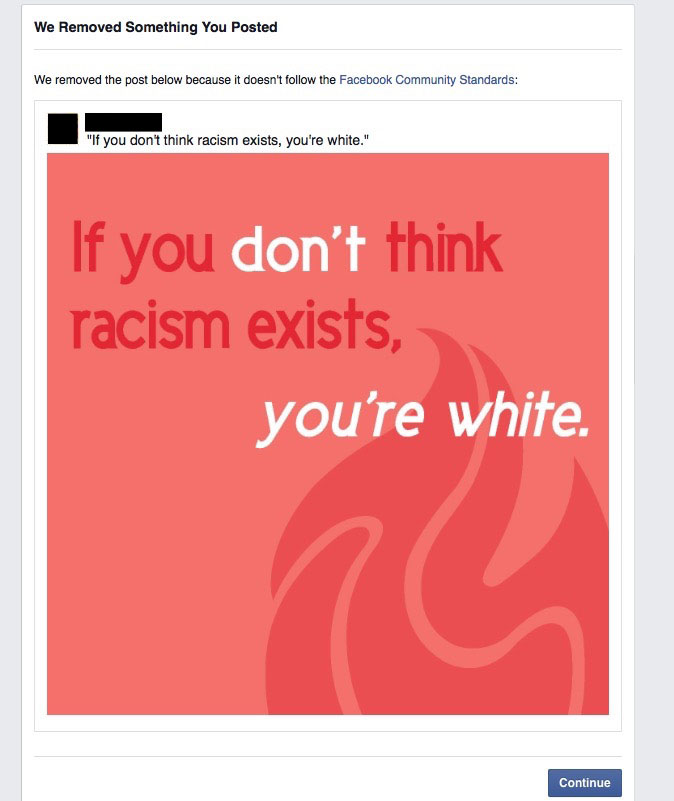 Chicago Theological Seminary posted a message on racism on social media on August 18th, only to have it taken down for "violating Facebook Community Standards".

The post which said "If you don't think racism exists, you're white," reached more than 200,000 people in the two weeks it as seen on Facebook. Over 16,000 people engaged with this internet post (meme) with either likes, comments, or sharing.

CTS President, the Rev. Alice Hunt is disturbed that what she sees as an important message, which calls attention to racism, could possibly be seen as hate speech.

In a Huffington Post commentary, which Hunt titled 'Calling Out Racism is Love Speech, Not Hate Speech," she said that while people may have felt angry and offended by the post, she writes, " As people of faith, we must love enough to get angry at great injustice and call it out."

"Those who are offended by the post are likely reading it incorrectly. We are not saying that all White people are racists. We are saying White Americans need to work harder to see racism," Hunt continues. "We are not saying that if you are Black, you cannot be a racist. We are merely making the point that persons of color know all too well the effects of racism."

"This conversation must go forward. As a white person, I and other white Americans who are concerned about equal justice in our society need to make sure we are valuing black lives as much as we are valuing our own.

As an educator, I feel called to teach about these issues. African Americans are American citizens who are coming under fire. This cannot, in all conscience, be allowed to continue. White Americans must bear witness to the deaths and desecration of black lives.

As a religious leader, I feel called to teach and preach about these issues. People of faith, we need a new kind of prayer. Our prayer must be action. Here are three things: we must learn to 1) recognize how our white privilege pervades our culture; we must 2) name white privilege every time we see it; and we must 3) confront ourselves in the mirror and examine, accept and correct what we do on every front. Our prayer at this time must be action."

Hunt's article can been found here.