Even an 1843 building can be accessible, Ohio church shows 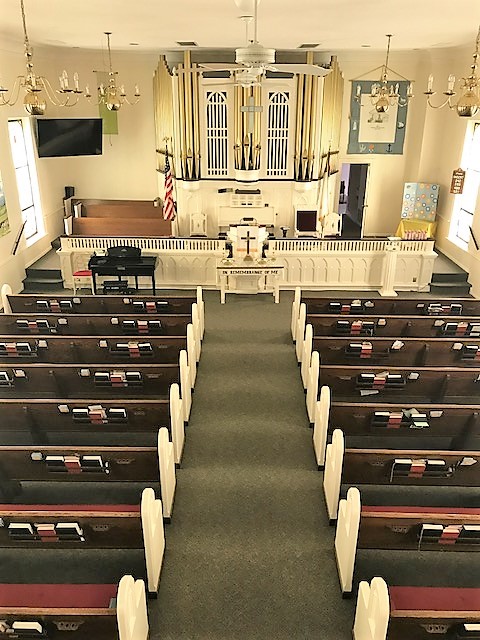 The folks at Community Congregational United Church of Christ in Amherst, Ohio, weren't sure their sanctuary, built in 1843, could ever accommodate people with physical disabilities. Now the changes they've made to their New England-style building have won a national UCC award.

UCC Disabilities Ministries honored the Amherst church with an accessibility award at the denomination's General Synod in June, and the congregation celebrated its newly accessible sanctuary in worship Aug. 18. There are more changes to come through 2021.

In early 2018, the church had just remodeled two rest rooms for accessibility when the Rev. Brian Burke, interim minister, observed that the worship space was the only room left with obstacles to users of wheelchairs and walkers. A main door was too narrow, and "we had a portable, fold-up metal ramp, but it really wasn't functional," Burke said.

Everyone thought a more permanent ramp in the cozy, 150-seat worship space would be too steep or displace too much seating. Then the local contractor who had worked on the rest rooms proposed a solution. It involved widening the sanctuary door and lowering the floor to create a ramp along the side of the sanctuary with the correct incline.

That got things going. Folks had other projects in mind around the building as well. The congregation discussed accessibility and other projects at "Coffee and Conversation" after worship. The Buildings and Grounds Committee took the lead, a list was created and winnowed, quotes were obtained, the congregation voted, "and before we knew it, we were in a capital campaign," Burke said. The three-year, $150,000 campaign began Nov. 1, 2018, under the goal "P.R.A.I.S.E." – making the church "proactive, relevant, accessible, inviting, safe and engaging." By early 2019, enough had been raised to pay cash for the sanctuary work, now completed at $21,500. 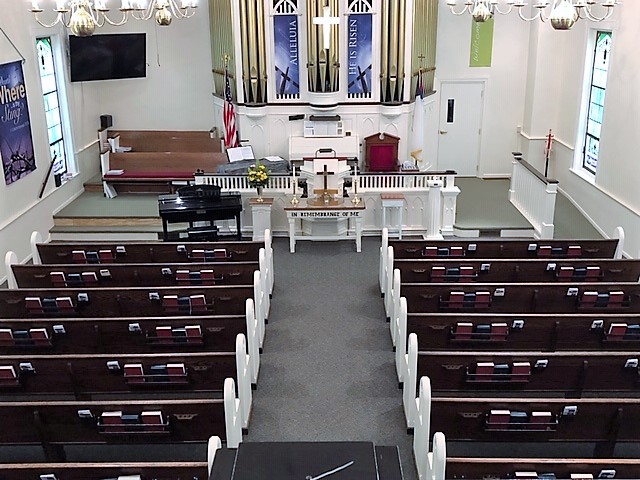 The remodeled sanctuary also includes added space and a ramp at the front for musicians and speakers, and a new safety railing along the balcony. More physical work is ahead as the campaign continues. Among the projects are an entryway awning and electric signboard outdoors, a reconfigured lounge, library and pastor's study to make more room for youth programs, along with a video system to stream worship to overflow rooms and over the internet for people who cannot attend in person.

Burke hopes even those changes will just be the start. In his column in the church's summer newsletter, he said Community Congregational would soon apply to UCC Disabilities Ministries for Accessible to All (A2A) status. He quoted the A2A checklist: "Ramps and physical access to congregational life are vitally important; however, research shows that social attitudes are often a bigger barrier to inclusion."

"Many of us know people who suffer from depression, bipolar, post-traumatic stress disorder (PTSD), addiction disorders, obsessive-compulsive disorder (OCD) and many others," Burke wrote. "How easy it is to cast those people to the side rather than accept them for who they are and do our best to understand their issues. … We have torn down many physical barriers in the last 18 months. Let's continue by tearing down attitudinal barriers to fully welcome God's people into our midst."

"It's an inspiring example of how a small congregation can make big changes working together," said the Rev. Sarah Lund, Minister for Disabilities and Mental Health Justice with the UCC Health and Wholeness Advocacy Ministries. "They have an older building, and so to adapt it for accessibility took some creativity and determination. They are in a multi-phase plan to continue to improve the accessibility of their church, both with physical changes and with changes to their attitudes so that everybody can truly be included and celebrated as part of the Body of Christ."