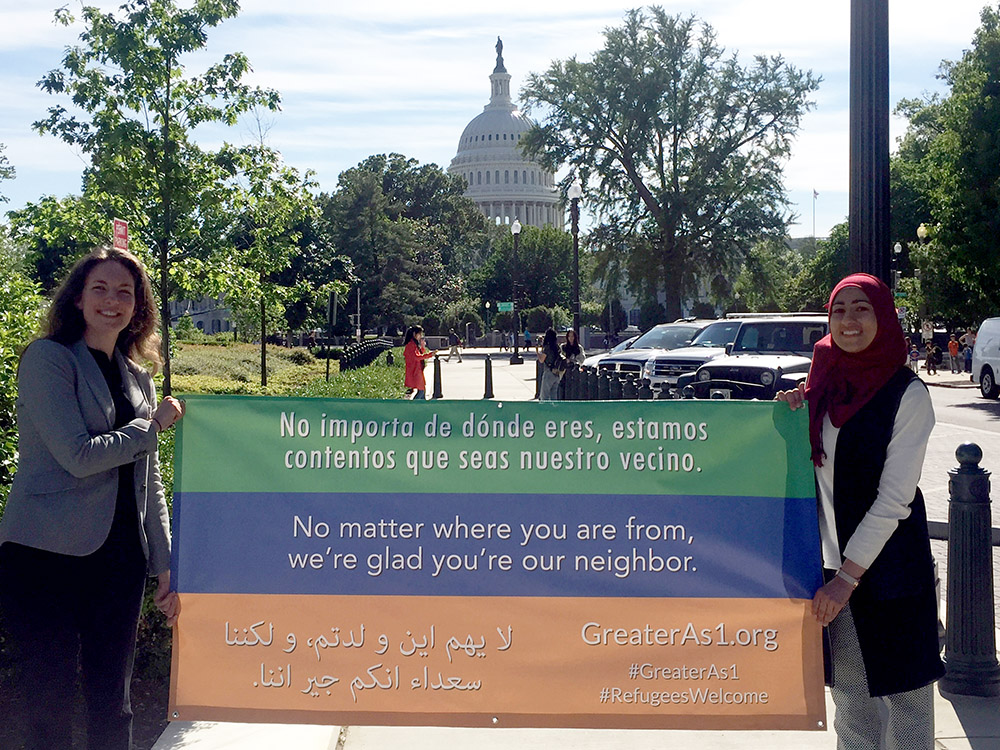 While the number of refugees resettled in the United States has dropped sharply after the change in presidential administrations, the State Department announced last week it will nearly double its quota, from around 900 refugee arrivals per week to about 1,500 — giving faith communities time to take note of the policy shift as they prepare to mark Refugee Justice Sunday, June 18.

United Church of Christ advocates are urging the church to become immersed in refugee justice, by displaying solidarity with refugees, by calling or writing lawmakers and advocating for refugee and immigrant support, inviting local media to a worship service that honors the difficult journeys of refugees and immigrants, and even building relationships with refugee resettlement offices and offering financial support.

"These are people who have been put in horrible situations, and as a country this is something we could act on, if we decide to," said Tyler Reeve, a former Global Ministries missionary intern. "When people meet refugees that come to the U.S., you realize they are people, who were put in a horrible situation beyond their control and now they have a chance to rebuild their lives. They are not given 'handouts' and it's incredibly challenging."

Reeve is now finishing up a one-year volunteer assignment with Community Refugee and Immigration Services (CRIS), a resettlement agency in Columbus, Ohio. He witnessed a drop of refugee arrivals after Donald Trump's first executive order, which affected the agency's funding and staffing levels, but an increase in interest.

"Churches started donating quite a bit," he said. "Our CRIS office has a yearly fundraiser, and the most people we had previously was about 150. This year we sold out three weeks in advance and had over 500 people. There's been a huge swell of community support to keep doors open."

Reeve said that refugees, who have been admitted to the United States since the 1970s, have become politicized in recent years, but he suggested taking the time on Refugee Justice Sunday to learn about their plight.

"They have shared stories how church groups along the way helped them in the resettlement process," he added. "Refugees I have encountered are eager to make a life for themselves. In my mind, it’s one of the most Christian things a church can do."

With the cutbacks to the number of refugees entering the country since January, Reeve and his CRIS colleagues have made the most of sharing some of those resettlement stories. "We've had all sorts of requests for us to come out and speak at churches to provide education, where people want to know what refugee resettle entails in the U.S. and have us share some personal stories of refugees and how it played out in their personal life," he said.

The Columbus CRIS office had resettled about 100 refugees from October through December 2016, but after the first executive order, the numbers dropped off. Reeve said in one month they resettled only eight people. While the numbers have increased, he explained, they are not at last winter levels.

In North Carolina, Chapel Hill UCC has actively received refugees from Burma and immigrants from Central America in the last decade.

"We started with one Burmese family, and now we have relationships with 13," said the Rev. Rick Edens, co-pastor of the congregation in Chapel Hill. "Just getting to know these people and to hear their stories, you find out that what drives them to make the decision is a forced choice. It's really quite compelling,"

For example, the North Carolina church is discerning a call to become a sanctuary church, and has plans to host a "mobile consulate" of El Salvador, which moves locations, later this month and expects about 1,500 people to come and apply for passports.

The Rev. David Mateo, an associate pastor at Chapel Hill UCC, said the congregation engaged these issues for two reasons: "The first reason is that this is a moral issue — beside any interpretation of the Bible or scriptural book. The second is that as a church we have made a commitment, our faith has that element to help our neighbor includes that commitment. As Christians we cannot be completely absent of these situations."

Back in Central Ohio, the Rev. David Long-Higgins believes that welcoming the stranger is embedded as a characteristic of his congregation, David's UCC in Canal Winchester, and that having a global consciousness is a central aspect of living out the Gospel.

"Going back several years, we've been hands-on with refugee resettlement — helping resettle a family of 15 from Liberia in 2000, and in the early 1980s with a family from Vietnam," said Long-Higgins. "I think there is a desire from our members to work with that, but for now it's sort of in a holding pattern [until more refugees are admitted]."

The involvement by David's UCC is deep on multiple levels. Members have served as global missionaries — some even working on refugee resettlement in Europe as part of their assignment. Long-Higgins serves on the Global Ministries Board of Directors, and even his daughter, a recent graduate from Columbia University's School of Journalism, is in Jordan for three weeks, working at the Zaatari Refugee camp near the Syrian border. It's the largest refugee camp in the world with nearly 80,000 people inhabiting a two-square mile portion of the desert.

Asked what steps churches can take to accompany refugees who seek to rebuild their lives, he suggested that "it has to come from the willingness of the heart — in our case it is to ask 'What are the possibilities?' There are ways for congregations to partner together in this work, where a smaller church can partner with a larger church and work together. Even having someone like Tyler come to your congregation to talk about what this is helpful, so that churches can act in more concrete ways."