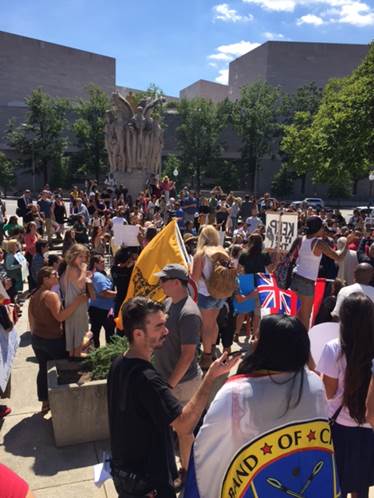 Tribal leaders who traveled by bus from the Standing Rock Sioux Indian Reservation in North Dakota to a U.S District courthouse in Washington, D.C., were joined by advocates from the United Church of Christ on Wednesday in a public demonstration of solidarity against the Dakota Access pipeline. The Tribe lawsuit, heard inside that courthouse on Aug. 24, challenges a decision by the Army Corps of Engineers that approved construction of the pipeline along reservation lands and under their sole water source, the Missouri River.

The Tribe wants a judge to block the pipeline, effectively stopping construction, contending that the Corps has failed to follow the laws – risking leaks or breaks under the river and failing to protect their ancestral and sacred sites. The Native Americans also want to be heard.

"I’m the closest landowner to the Dakota Access pipeline," said LaDonna Allard, who didn't make the trip but is following the case closely. "When I heard they were putting a pipeline next to my son’s grave, that’s when I had to say something. A sacred site, a burial site, how could someone do that to us without asking us. We have been fighting this for two years. They refused to acknowledge us, they refused to talk to us."

The 1,168-mile pipeline is slated to run from oil fields in North Dakota to a distribution point in Illinois. The Tribe says the Corps gave the pipeline owner, Energy Transfer Corporation, permission to build it without listening to input or objections voiced by the Tribe at both the state and federal levels.

"The pursuit of the Dakota Access pipeline adds to the legacy of our government’s broken promises to Native Americans," said Jason Carson Wilson, UCC justice and peace policy fellow in  Washington, D.C. "The latest broken promise reeks of White privilege, religious freedom violations and willful ignorance of very real environmental ramifications. We stand in solidarity with the Standing Rock Tribe."

In solidarity, several other Native American nations are offering encouragement and assistance. The Cheyenne River Sioux Tribe has asked to join the lawsuit, and several other tribes have passed resolutions in support of Standing Rock, including the Crow Creek Tribe, the Oglala Sioux Tribe, and the Rosebud Sioux Tribe.

The UCC national leadership added its voice to the opposition of the Dakota Access pipeline, saying the issue is one that "touches upon vital matters of racial justice, the honoring of sacred space, and the climate impact of fossil fuels."

The Texas-based company claims the project is a major step in limiting the United States’ reliance on foreign oil, and that the pipeline will improve local economies, create jobs and bring in millions of dollars. Energy Transfer Partners also notes that the pipeline is safer than transport by truck and train cars.

The judge hearing the lawsuit, James E. Boasberg, said he will announce a decision on the case on or before Sept. 9.

"Over the last two years or so, the faith-based advocacy community in Washington, D.C., has become more intentional about understanding and communicating the impact of public policy decisions on Native communities, around issues like the federal budget, school funding, violence and hate crimes, voting rights, land use and environmental justice," said Sandy Sorensen, the director of the UCC Washington, D.C., Office. "We recognize that to be fully accountable for the complicity of faith communities in the oppression of Native communities, we must address the ways in which this history continues to be reflected in policy decisions that negatively impact Native communities. Actions like today’s witness of solidarity can help raise awareness of this connection."