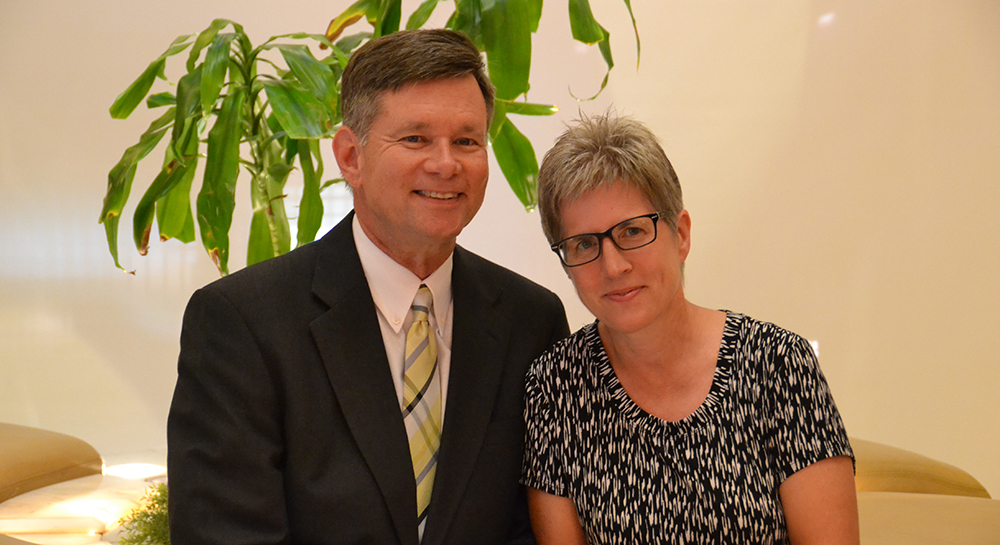 Both the Rev. Barbara Kershner Daniel and the Rev. Kenneth Daniel grew up understanding the importance of the United Church of Christ's One Great Hour of Sharing program and how it changes and saves lives. Gifts to One Great Hour of Sharing have long supported emergency relief, disaster response, sustainable development and social services in some of the poorest areas around the globe.

When the couple was approached about supporting the work of One Great Hour of Sharing, they stepped up to serve as national spokespersons for the OGHS Endowment Fund established two years ago that aims to deepen and expand the work of the church and its partners.

"It's one of those causes that I grew up with that is so crucially important year after year," said Ken, president and CEO of United Church Homes, a ministry of the UCC's Council for Health and Human Services Ministry. "When the church sees a need, it finds a way to meet that need."

"It's a transformative offering," said Barbara, pastor of Evangelical Reformed UCC in Frederick, Md. "I remember my parents taking about the OGHS offering and about responding to people in need. I could see how those offerings were put into place and changed peoples lives."

As spokespersons, the Daniels will "promote the mission, goals and activities of the OGHS Endowment Fund, while helping articulate its importance to UCC members and the general public, building awareness, and helping us achieve a goal of $1 million invested by December 2017," said Phyllis Richards, program associate for the UCC's Global Sharing of Resources Team.

With the creation of the endowment, launched in March 2014 through a $100,000 lead contribution over five years, Wider Church Ministries was able to establish a long-term development fund for humanitarian relief. The OGHS Endowment Fund was created to supplement the annual OGHS offering, taken each year during March as one of five special offerings of the church.

Both Barbara and Ken have been involved with Wider Church Ministries for several years, with both previously serving on its former board of directors. Barbara also chaired the Global Ministries Board of Directors — Global Ministries is the shared overseas ministry between the UCC and Christian Church (Disciples of Christ) — and had a chance to witness OGHS funding at work. She visited Jordan and saw how refugees were being supported with clothing and supplies, and she traveled to Honduras and saw a mission to rebuild homes after a hurricane.

"We're both been dedicated to One Great Hour of Sharing throughout our ministries," Ken said. "I've been in ministry since 1981, and I've been involved in promoting it since then as a pastor at the congregation I served, and I've promoted it as a member of the CHHSM board."

"The church does not abandon people after the concern [of a disaster] is off the front page or the top of the news," Barbara said. "It's an offering that continues to develop communities — it's a hand up, not a hand out."

Said Richards, "Having each of them serve individually would have been great, but to have them serve together in this role is phenomenal, because they are a dynamic team."