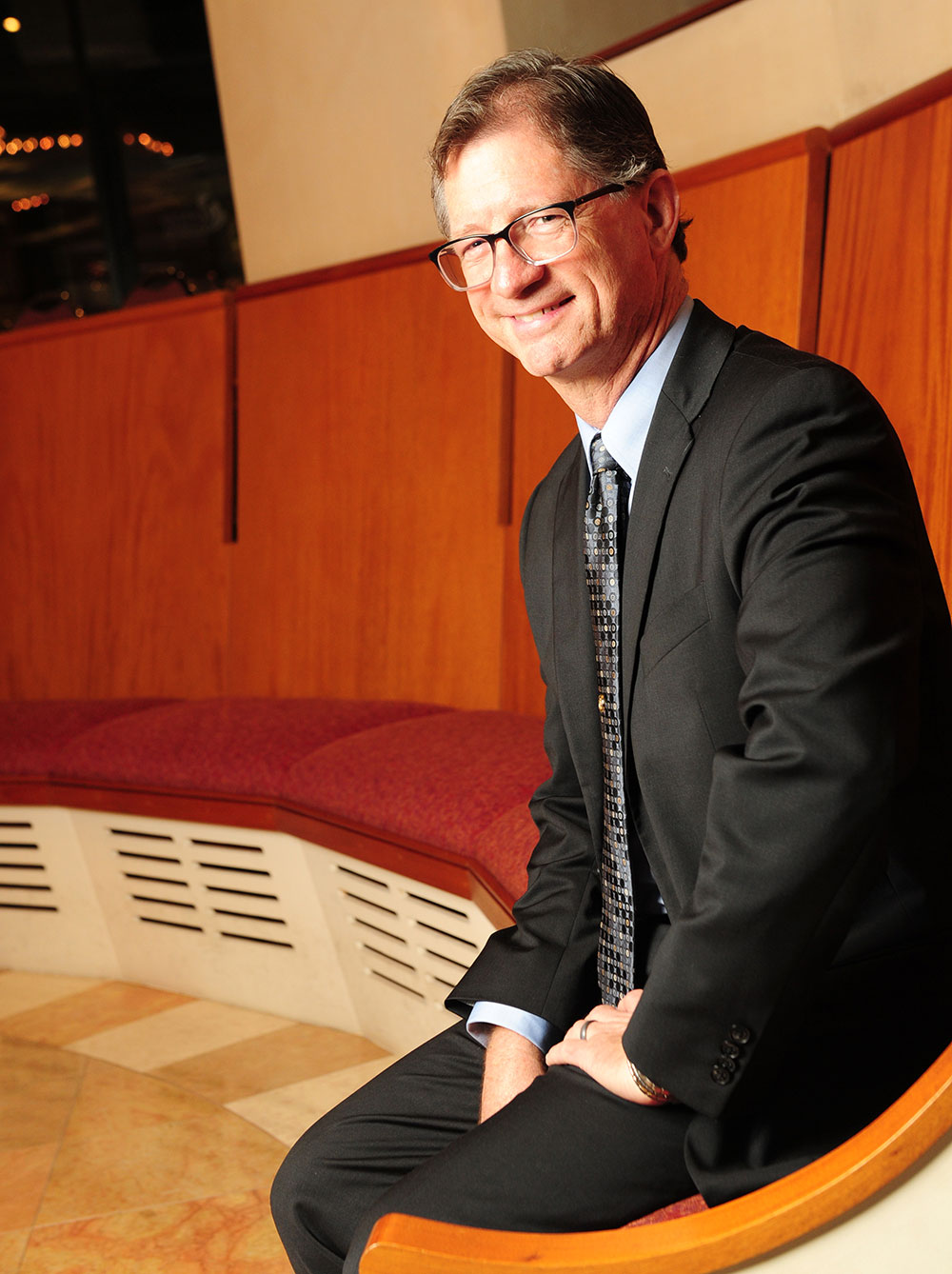 "That they may all be one." (John 17:21) That prayer from Jesus, the church's motto for almost 60 years and one of the core principles of the United Church of Christ, has fueled an intentional commitment to be servants to others during the first year the Rev. John C. Dorhauer has held the office of general minister and president.

Building on Dorhauer's mantra, "The Holy Spirit envisions a world in which the United Church of Christ matters," the congregations of the United Church of Christ are addressing issues that make a difference in the world in 2016. Addressing racism through the Black Lives Matter movement and the upcoming white privilege curriculum, standing against discrimination, including that aimed at the LGBTQ community, and offering extravagant welcome and visible public support for Muslim neighbors through its Building Bridges initiative, the UCC is reaching out to like-minded people in service to others.

Congregations in the Pacific Northwest Conference banding together to hang banners against Islamophobia and church members in Texas forming a circle of solidarity around a local mosque after a shooting are just two of the most recent examples.

"Around the country, congregations of the United Church of Christ are living into an ongoing commitment to be an interfaith partner, to reframe understandings of how Christians relate to our Muslim neighbors," said the Rev. John C. Dorhauer. "At every level, the United Church of Christ is expressing its solidarity and support of Muslim neighbors who continue to suffer indignities and injustices. It makes me very proud."

The effort is not going unnoticed. 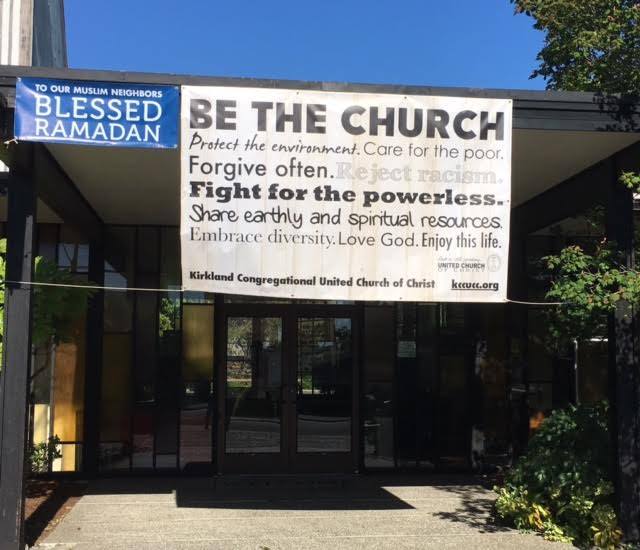 "The United Church of Christ is setting an important example of serving God by serving humanity," said Arsalan Bukhari, the executive director of the Council on American-Islamic Relations (CAIR) in Washington. "The responses from UCC churches really speak to the values and the character of UCC leaders. They really are showing the country what it means to "do to others what you would have them do to you."

"In many ways the world of 2016 seems more deeply divided, polarized, angry, fearful and violent than it has been for a long time," said the Rev. Rich Pleva, conference minister of the Iowa Conference UCC and chair of the Council of Conference Ministers. "Some of this division and violence is – or is presented as – religion-based. The UCC has a history of taking groundbreaking positions on difficult and controversial questions and now it is time for the UCC to lead again – to model a manifestation of Christian religion that is widely inclusive and contributes to inter-religious reconciliation, respect and trust-building rather than to the opposite. Rev. Dorhauer is leading us in precisely those directions."

With "Our Stillspeaking Voice", a monthly issues-oriented multimedia initiative that Dorhauer rolled out during his first 90-days in office in partnership with several UCC conferences, the church has been addressing issues that are part of the church's DNA. 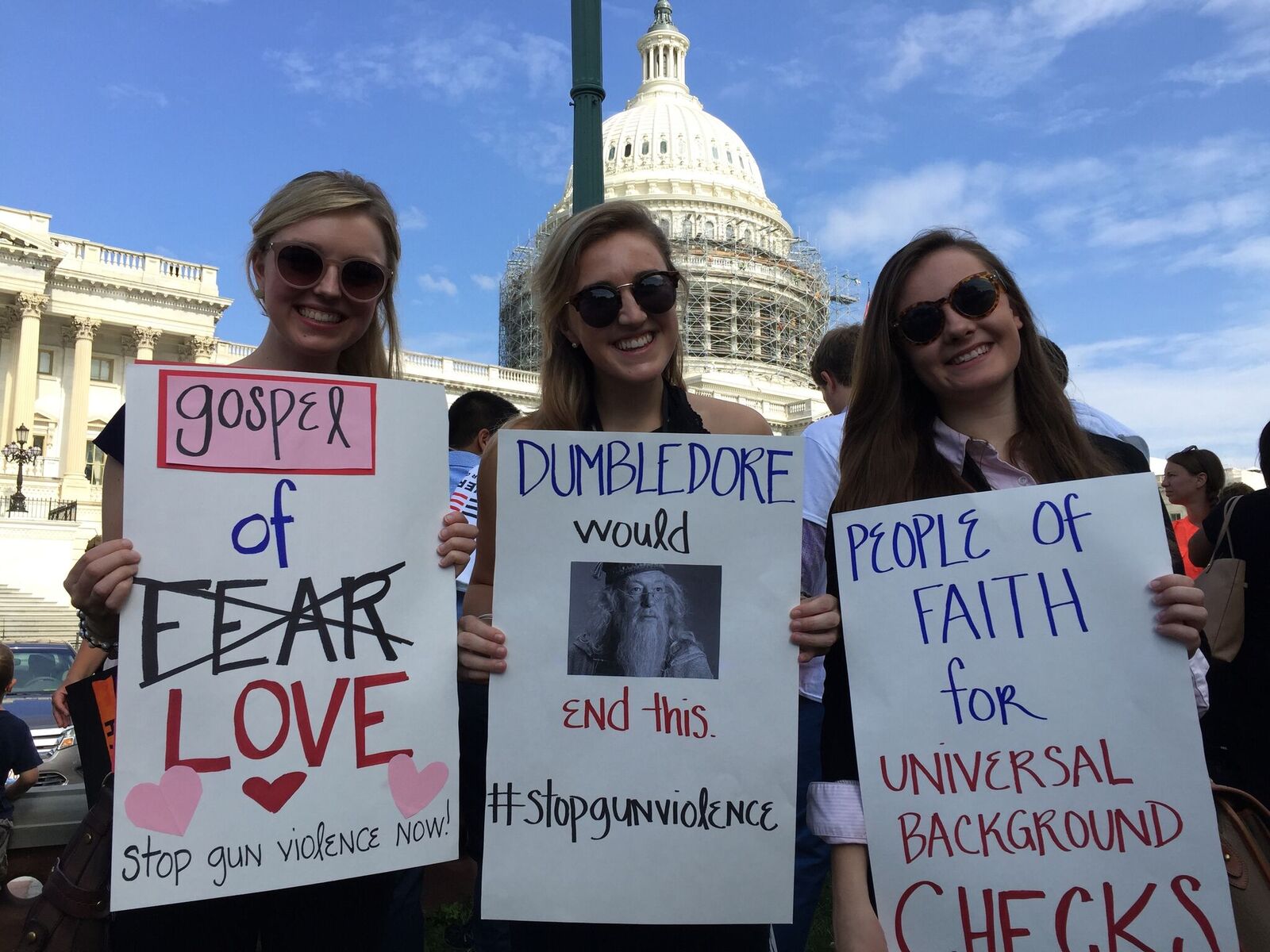 From a public voice against racism, to work to end mass incarceration and break the cycle of gun violence, providing resources to address sexual abuse in churches, and combating the effects of climate change, the UCC has been aiming to address, as pointed out by United Church of Christ Board Vice-Chair Frank Bolden, "the pain and anguish caused by the marginalization of African Americans resulting in the senseless killings of unarmed African Americans and police, the plight of refugees from the Middle East, including highly-polarized views of our role in this crisis and the pent up anger, rage and frustration among Americans who feel they are being left behind and ignored."

"This seems like a great environment for the United Church of Christ, congregations of people trying to walk in the footsteps of Jesus, seeking to live lives guided by love of God and each other, forgiveness, hope and faith," Bolden said. "Adherence to these guidelines will create valuable examples for others to follow and will establish ripples of peace, harmony and prosperity to spread joy and hope to those who feel trapped in pools of despair." 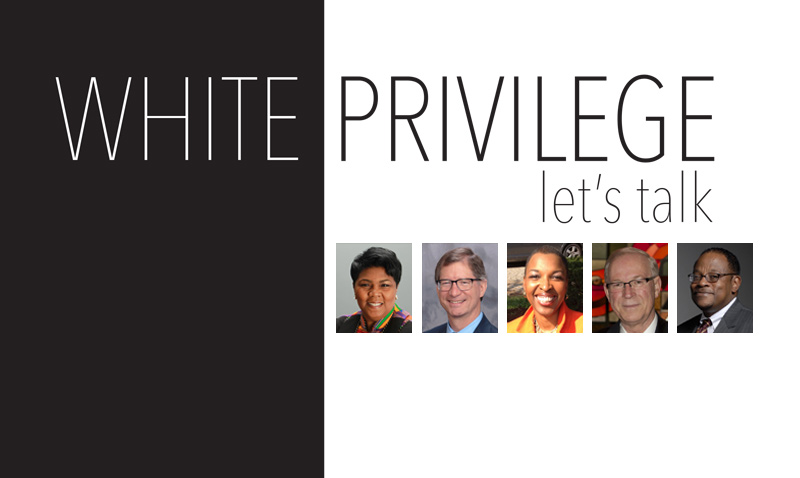 The "White Privilege: Let's Talk" resource, which will be released in the next few weeks, is written by five authors from different walks of life and designed to provide an opportunity and an example for adults to engage in safe, meaningful, substantive and bold conversations on race.

"A curriculum on white privilege is timely and appropriate because it addresses one of the most serious impediments to the realization of the American dream: racism," said Bolden. "Discussions to eliminate racism often derail over the inability to understand white privilege. An understanding of that topic can help us learn to love our neighbors as Christ loves us."

"At the heart of the Christian life is connection and relationship between us and God and with one another. One of the impediments to healthy relationships is racism and white privilege," said the Rev. John Paddock, rector of Christ Episcopal Church in Dayton, Ohio and one of the curriculum's authors. "Our failure to open our eyes to these issues distorts our view of ourselves and of others. So in order to move forward in our mission and purpose we must begin (and/or continue) to see ourselves and others as we truly are."

"I liken the UCC to an ice-breaker ship in the Arctic Circle: a ship built like no other, with a specific design and purpose, to break open new paths through inhospitable frozen landscapes, and in whose wake other ships may then move quickly," said the Rev. Sue Artt, conference minister of the Rocky Mountain Conference UCC, UCCB board member and 2017 General Synod moderator. "The ‘UCC as ice-breaker' perhaps has never been more apparent than in the 10-year arc of action from our 2005 General Synod adoption of ‘Equal Marriage Rights for All' to the eve of the 2015 General Synod when the U. S. Supreme Court ruled in favor of marriage for LGBTQ persons across the land. Our ice-breaking action in 2005 created safe space for other social groups and churches to follow us into that gap, and just a decade later, manifested a major cultural change in America.

"The UCC as social and cultural ice-breaker is the unique call of the Holy Spirit upon our collective lives -- this IS how we matter. And we're doing it again with our support of the Black Lives Matters movement, our white privilege curriculum, and standing in solidarity with our Muslim brothers and sisters, once again breaking open frozen ground — perhaps breaking open frozen hearts — to the awareness of Christ's call for all to be one."

In an effort to build more unity among the settings of the United Church of Christ, the denomination's national offices have initiated a Congregation Connections project to encourage greater interaction with local churches, launched the Stillspeaking 2.0 Toolkit, and planned a GMP installation service that crisscrossed the country. The three-day, three-city event, April 15-17 was held in New York City, Chicago and Seattle, as a continuous worship service that invited the wider church to celebrate a new chapter in the life of the UCC. It symbolized Dorhauer's vision of a national setting that serves the full width and breath of the denomination, and reaffirms a message that the settings of the church belong to each other.

"In this world of mass media and the instant broadcast of events around the globe, tight communication between every setting of the United Church of Christ, from the smallest congregation from the most remote location of our country through and to and among every entity of the UCC is of paramount importance," said Bolden. "Communication channels must be opened, repaired, established and functioning properly so that every expression of the church can be clear about who we are, what we are trying to do, how we are trying to do it, etc. This work has begun with the UCCB and the National Setting seeking greater transparency by having more meetings with the Council of Conference Ministers, John's podcasts, surveys and focus group discussions by task forces and national workshops and webinars."

There is also closer collaboration within the levels of leadership of the United Church of Christ.

"Now, at the end of our sixth decade, the various settings of the church are dipping their metaphorical toes into the waters of more meaningful cooperation and trust," said Pleva. "This is not easy because trust hasn't always been our default mode, but we are making progress. That's important because our voice will only be effectively heard if our various settings can speak together on those matters about which we care the most. We live in a time of many voices – ours has a better chance of being heard if we learn to speak in concert with each other.

"We live in a nation and world where the questions of white privilege and inter-religious respect can become matters of literal life and death," said Pleva. "If we seriously believe that Jesus invites us to a kind of abundant life that has meaning for peoples of all skin colors and religions, then we must think and talk and learn and grow and struggle around these essential and difficult challenges."