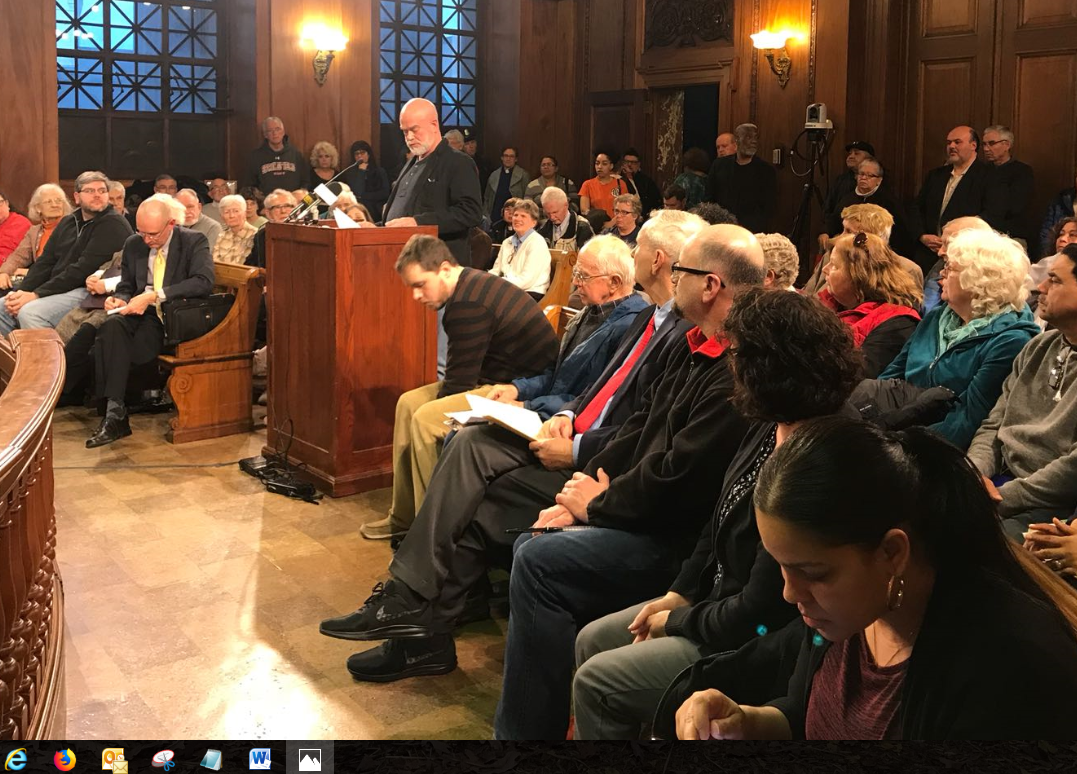 The City Council of Springfield, Mass., is offering strong support to a local United Church of Christ congregation providing sanctuary to a mother facing deportation and separation from her family.

Meeting Monday evening, April 9, council members directed the city to leave South Congregational United Church in peace, passing an order that prohibits Springfield from interfering with a house of worship's provision of sanctuary.

South Congregational, offering refuge to Gisella Collazo and her two American-born children, has already been subject to inspection for code violations at the insistence of Mayor Domenic Sarno, who objects to the UCC church’s sanctuary ministry. The council order, which passed unanimously, could become law without the mayor's signature.

"The action of the city council is encouraging as an indication of value for fair treatment of people who are underprivileged and marginalized," said the Rev. Tom Gerstenlauer, pastor of South Congregational. "Our position, of course, is pro love of neighbor and hospitality toward the stranger, so our work as disciples remains before us."

Gerstenlauer spoke at the council meeting, reading from the book of Matthew, and quoting the Lord's direction to welcome the stranger. He said that his congregation is heartened by the support they are receiving for staying true to Collazo and her family.

"We have heard from numerous faith communities from points near and far, UCC and other faith streams, as well as individuals that have not shared a faith identity but have indicated shared faith values," he said. "The congregation is holding up, though not without periods of anxiety; prayers of support are felt and encouraged."

"The United Church of Christ is an Immigrant Welcoming denomination. General Synod voted overwhelmingly in 2017 to support a resolution that calls on our local congregations to embrace and welcome immigrants," said UCC General Minister and President the Rev. John Dorhauer. "This also means our faith communities must stand up and fight against bullies who want to capitalize politically by discriminating against immigrants instead of working together as Americans to build inclusive and welcoming communities for all."

Collazo and her two children, 10 and 4, moved into a two bedroom apartment in the back of the church on March 26, after Immigration and Customs Enforcement had ordered Collazo to return to Peru the next day.

Emigrating to the U.S in 2001, Collazo settled in Massachusetts, and married to an American citizen in 2005. She received a work permit a year later, and began the process to become a citizen. However, mistakes were made, and she was targeted for deportation during her January check in with ICE. She took sanctuary at South Congregational after exhausting her options to remain in the U.S. with her husband and children. The UCC church and the other faith communities organized as the Springfield Interfaith Sanctuary Coalition reported her circumstances to ICE, and she was bound with an ankle monitoring bracelet.

Despite the fact that she can't leave the church building, Collazo has expressed gratitude to the pastor offering her refuge.

"Pastor, (I) wanted to thank you for the help you are giving me and I apologize for everything that has happened to your church. (It) gives me a lot of sadness and fear at the same time with these things," Gisella wrote. "I do not like clashes between us human beings. From my heart I ask God to bless you forever."

The Springfield church is the second UCC community in Massachusetts providing sanctuary to an immigrant facing separation from family through deportation. First Congregational Church, UCC, of Amherst, welcomed Lucio Perez into sanctuary on October 19. It enables the Guatemalan father of three U.S. citizens, a resident of this country for almost twenty years, to stay near his family as he petitions the government to reopen his case.