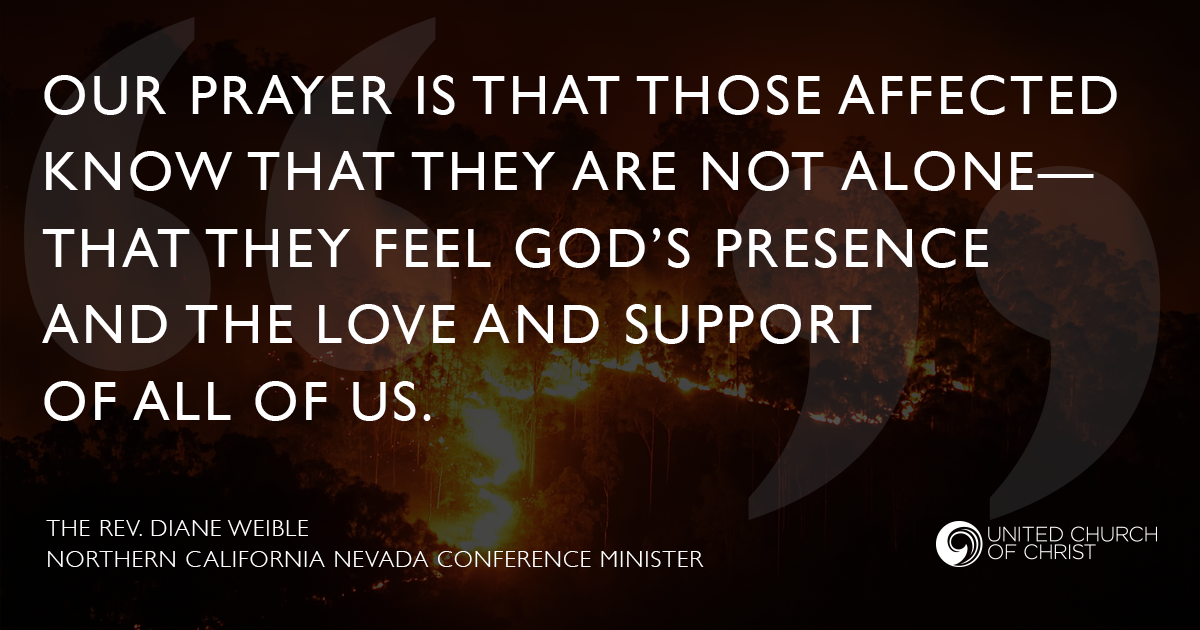 As the deadly wildfires continued to rage in Northern California, three members of a United Church of Christ congregation in Santa Rosa hunkered down on Tuesday afternoon, manning the phones.

"Right now we are in the process of contacting our members to see what the status of each person is," said Bill Gibson. He and his wife Judy were working with the church moderator. "We have a few so far who have lost their homes."

Many members of the First Congregational Church UCC Santa Rosa (FCCSR), with their community and several others directly in line of the spreading fires, had to quickly evacuate their homes beginning late Sunday night. Swiftly moving flames, fanned by high winds, destroyed more than 2,000 structures, left more than 17 people dead, 180 injured and ravaged the region's wine-growing industry. At one point the state counted 15 fires, covering collectively more than 115,000 acres.

"As far as the church goes, the large windstorm left trees down," Bill Gibson said. "It's still quite smoky here, but the church is ok. The major fire damage for the Northern Santa Rosa city area is two or three long blocks from us. We still have power, but I imagine the area around us doesn't. We wanted to contact all the members of our community and see how we can help them." 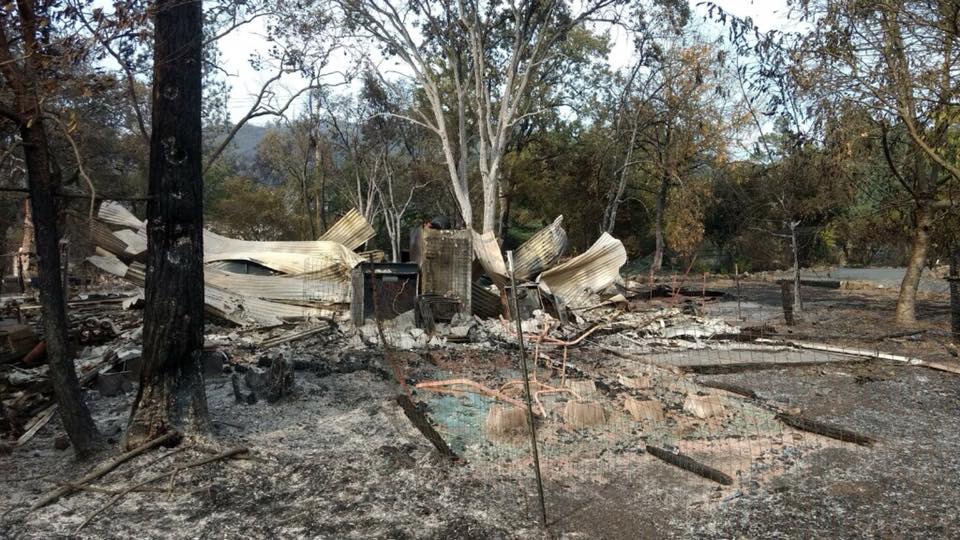 Based on their phone calls and check of Facebook posts, Bill said the fires forced a large number of congregants - 30 to 40 families - to be displaced. FCCSR Moderator Winnie Hogoboom said at least six families have lost their homes. At the time of our phone conversation, she learned that yet another family was being forced to evacuate with flames spreading down the hill into their neighborhood.

Both described the situation as "surreal."

"We are fortunate the church is ok, but the larger community is feeling very much like a war zone," Hogoboom said. "It certainly feels unbelievable to us to be in the middle of this."

"Of all the wildfires since I have arrived in Northern California, this is the first that has had immediate threat to one of our churches and widespread among the members," said the Rev. Diane Weible, Northern California Nevada Conference Minister.

Weible was with a number of other UCC clergy at their annual Authorized Ministers Retreat in Citrus Heights Monday when the group learned about the devastating effects of the North Bay fires. Some of those gathered also found out that their families had been evacuated or that they could not return home.

That included the Rev. Curran Reichert, of the First Congregational Church of Sonoma UCC, where, in Sonoma County, a  new round of evacuations has been ordered today.

"The Rev. Eddie Sunia, Pastor of Wellspring Church, (First Samoan Congregational Christian Church of Santa Rosa U.C.C) has reported that his home was lost," Weible said. "He and many church members have gathered at the church, which is not affected, and are supporting each other through this difficult time. The Community Church of Sebastopol UCC has also opened its doors for those who need to evacuate."

The Community Church became an emergency center, taking in 45 evacuees. It acted as an overnight shelter, volunteers served meals to those who needed them, and it offered those displaced the opportunity to take showers at the facility. The church remains on a list as a potential shelter site, should the need arise again.

"This is a painful and difficult time as we are all concerned for the safety of our brothers and sisters in this part of our Conference," said Weible. "Rev. Sunia told me last night that they are ok because their congregation was together. Our prayer is that those affected know that they are not alone—that they feel God's presence and the love and support of all of us in the Conference. We stand ready to offer financial, emotional and physical presence in any way that can be most supportive during this critical time."

UCC Disaster Ministries Executive Zach Wolgemuth has already reached out to Wieble, and through her, the churches in the Northern California Nevada Conference, with offers of solidarity grants for early assistance and clean up work.

As Weible said, "It is in times like this that we are reminded that the strength and love that comes from God and that we share with one another will help see us through the most difficult times."