Inspired by the opening words of a Bible verse, "Remember those who are in prison," United Church of Christ members joined rallies at a Washington state penitentiary and the capitol building in Olympia on Thursday, April 16, to demand better inmate treatment in response to the COVID-19 pandemic. 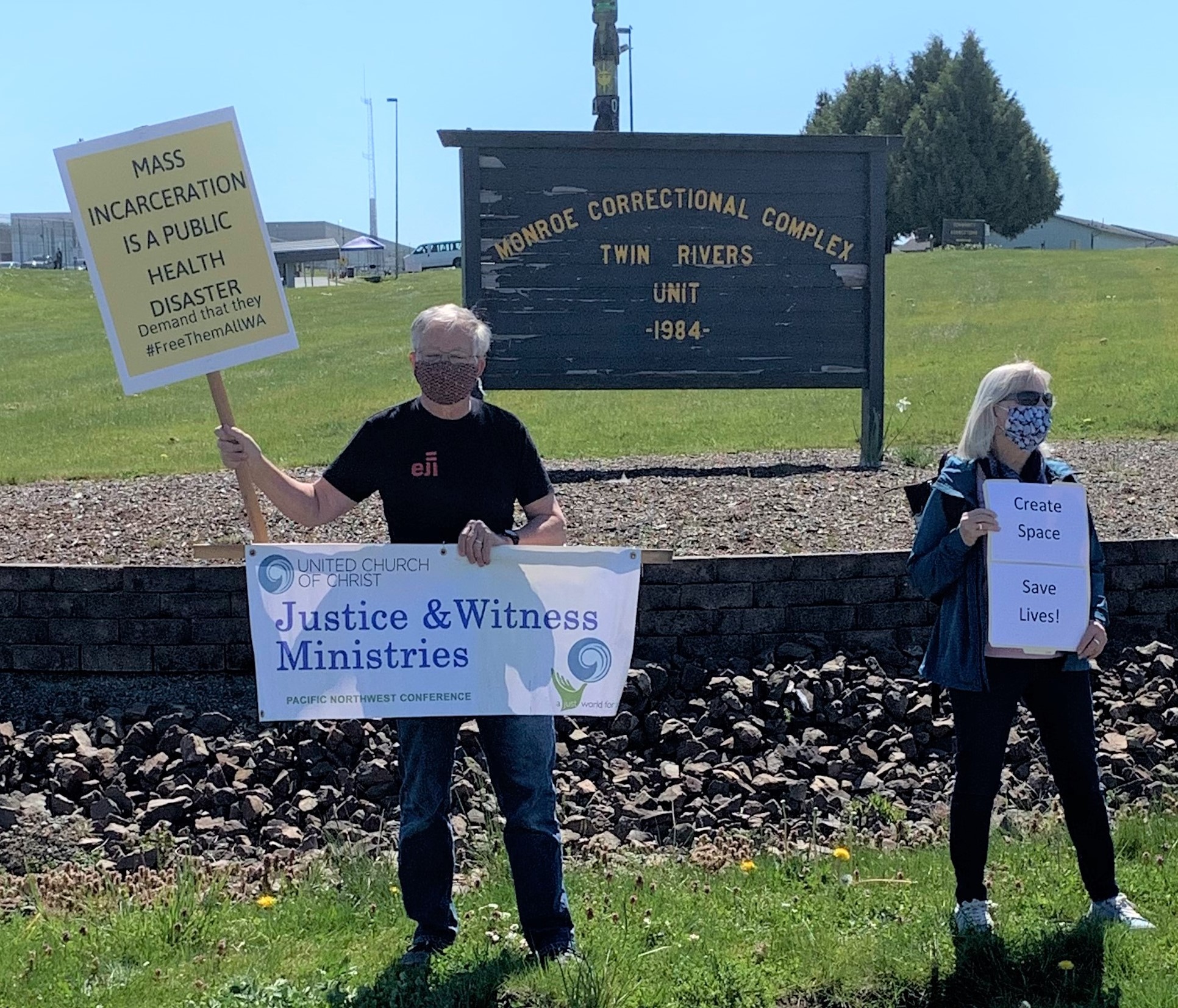 The protests were organized by a coalition seeking the humanitarian release of prisoners vulnerable to the coronavirus – for their own health, and to create safe spaces between remaining inmates. As part of the movement, the Pacific Northwest Conference of the UCC has signed on to a letter to Washington Gov. Jay Inslee, seeking those and other measures.

"Of course, this ties into our national problem of mass incarceration and racism," said Steve Clagett (at left in picture), who chairs the Conference's Justice and Witness Committee and belongs to its Dismantling Racism Team. He noted that, as in many states, a disproportionate number of prisoners are African American, Latinx and other people of color.

The governor had agreed earlier in the week to release 925 prisoners from the state’s 12 incarceration sites. That's a fraction of the 10,000 releases sought by Washington's COVID 19 Mutual Aid coalition, which is coordinating the prisoner-advocacy efforts the UCC Conference is taking part in. Some prisons are overcrowded, with as many as three bunks to a unit, the coalition says.

Claggett, a member of Seattle's All Pilgrims Christian Church (UCC and Disciples of Christ), was among 22 people at Thursday's noon demonstration near the entrance to the state penitentiary in Monroe, about 20 miles north of Seattle. Spaced far from each other, per pandemic protocols, many of the protestors displayed signs with messages such as the one held by Chris Hanson of Seattle's Plymouth Church UCC, another member of the UCC Dismantling Racism Team (at right in picture): "Create space, save lives." 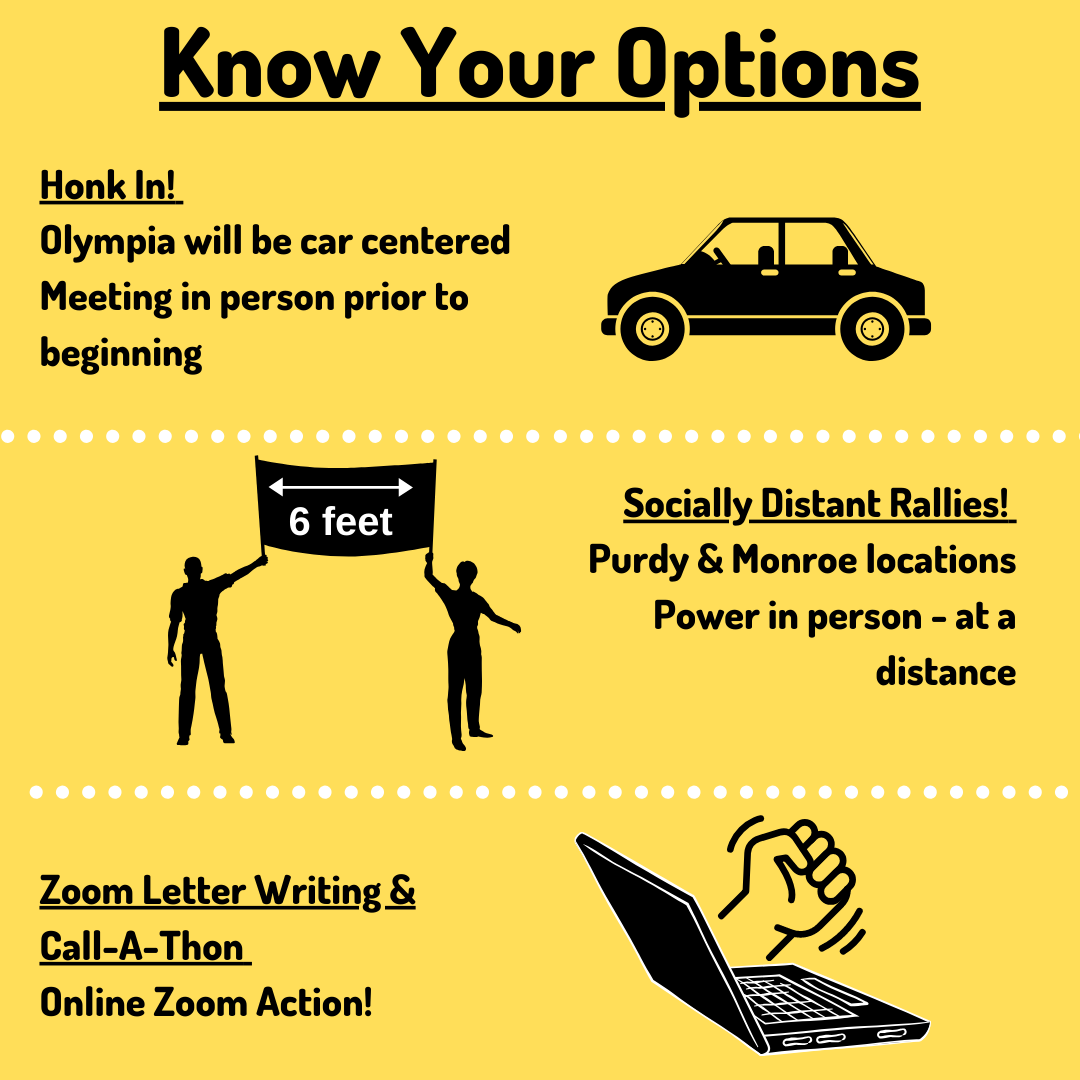 Meantime, 90 minutes to the south, 27 cars were blasting their horns for the duration of that same noon hour as they circled the area of the Washington State Capitol Building and the governor's mansion in Olympia (see photo below). Demonstrators also made noise on nearby sidewalks with pots, pans and percussion instruments. One of them was Leslie Cushman, who belongs to The United Churches of Olympia (UCC and Presbyterian Church [USA]) and to the Conference's Justice and Witness Committee.

Cushman emailed Pacific Northwest UCC churches April 15 to promote the protests and encourage them to send letters and emails, "asking the Governor, the Department of Corrections, and the State Supreme Court to provide early release to those who can be safely released, and provide compassionate care to those who remain in the State's custody." The joint letter to Inslee by the Conference and other community organization seeks these measures:

"Free Them All," one of the slogans of the COVID 19 Mutual Aid coalition, is perhaps overly broad, Clagett said – though he doesn’t necessarily object. "It's hard to come up with a few words that describe the racist impact of policies – 'Free all the people of color who [President Bill] Clinton put in prison for minor drug violations while white people were sniffing cocaine,'" he said.

The point, Clagett said, is to draw the attention of people in power to a life-or-death issue: "Right now, in the prison environment, people are packed in, cheek by jowl." 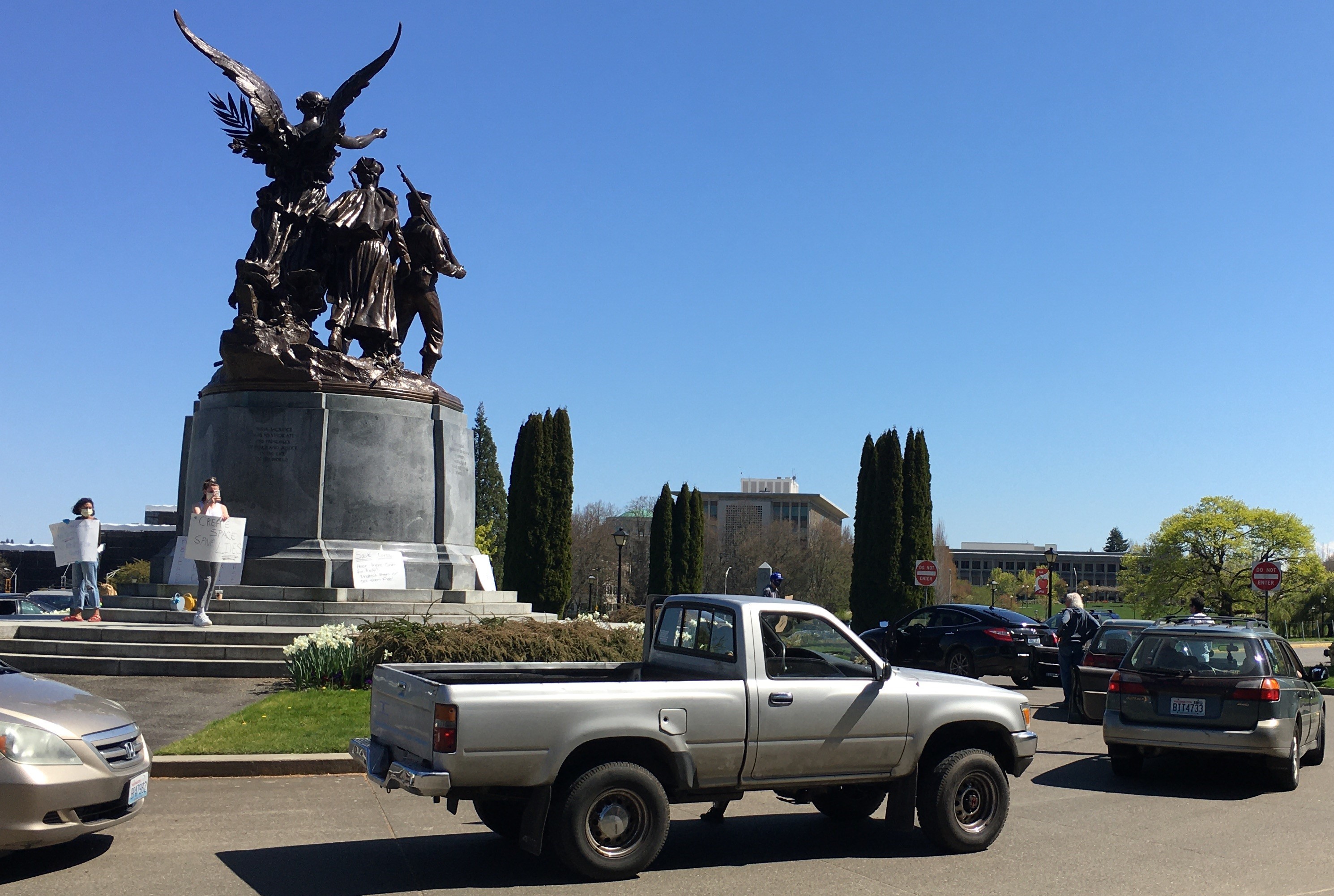