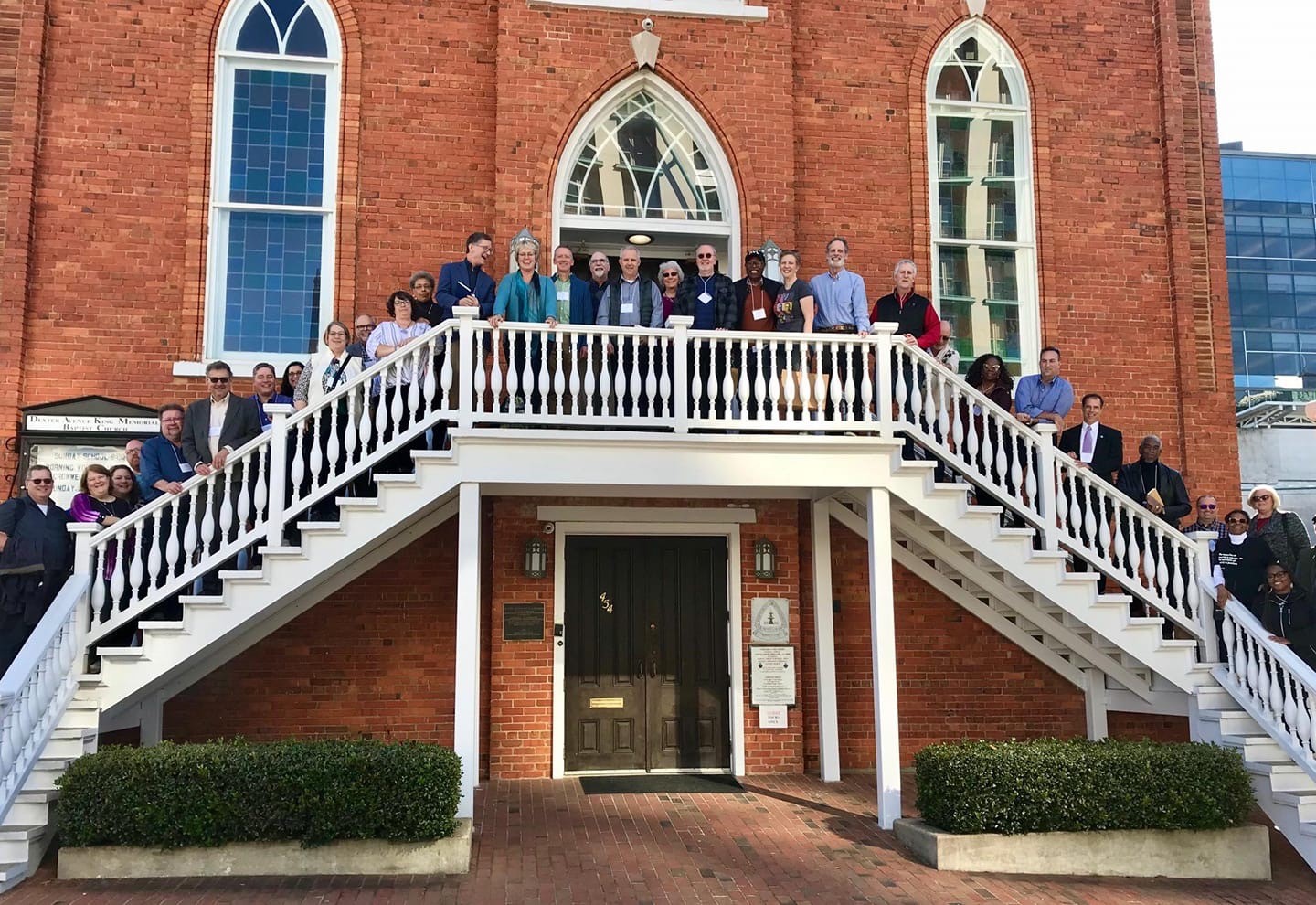 "I would call it reclaiming a history that has been untaught and unknown by most people in America for over 100 years," said the Rev. Marilyn Kendrix, soon-to-be bridge Conference Minister in the Southern New England Conference. "I have been dismayed by the way slavery, reconstruction and the civil rights struggle are glossed over in our schools. What we saw in Alabama was what can happen when black people work together to reclaim the narrative and set the record straight."

The group trip, which also included several spouses, was based in Birmingham, with excursions to Montgomery and Selma. They worshipped together, toured museums, memorials and churches in three cities, and shared what many called "painful," "powerful" and "transformative" truths over the course of three days, Nov. 19-22. General Minister and President Dorhauer called it "emotionally exhausting and spiritually enriching." 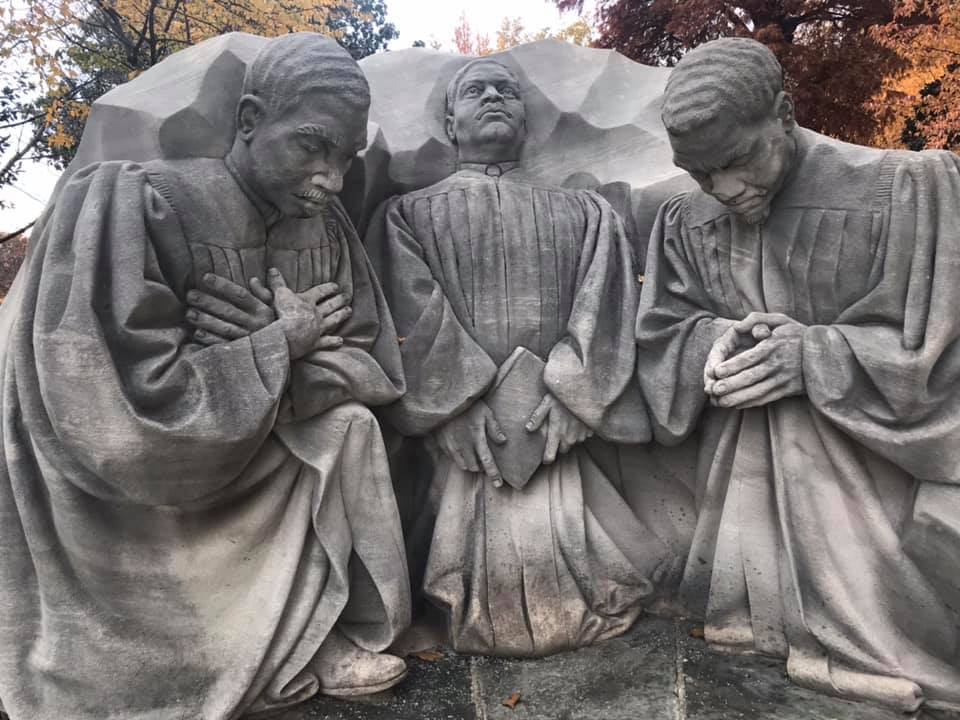 "The opportunity to be in Alabama reminded the group of the experiences of Africans and African descendant people in the United States," said Thompson, UCC associate general minister. "Through the visits we were able to see that while there have been legislative changes, there are systems in place that perpetuate the evolution of oppression and exploitation of African descendant people. Through sharing stories and being present with those who lived through the experiences, we were also able to share our experiences and learn from each other."

"We chose the stops based on several Conference Ministers' experiences on similar civil rights trips," said Connecticut Conference Minister the Rev. Kent Siladi, who was part of the planning team. "It was an important trip to demonstrate our solidarity as leaders of the United Church of Christ to address the sin of racism and to authentically deal with our own complicity and at times a failure of nerve to engage our Conferences in the work that we all are called to do."

The journey began with self-reflection before the group even gathered in Birmingham, with resources -- books, videos, and articles -- on racism, white supremacy and civil rights. 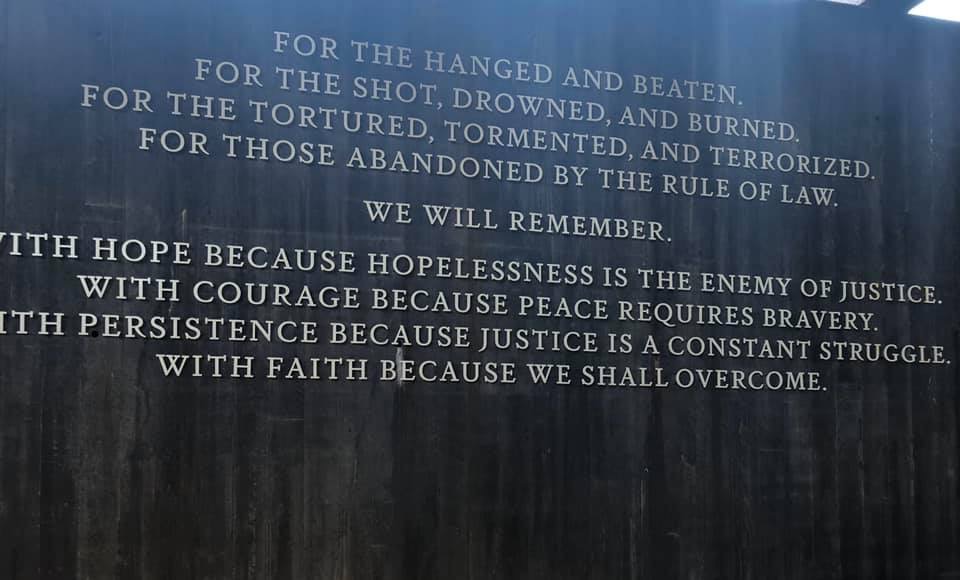 "The trip to Birmingham was more than reminding ourselves of our painful history of racial discrimination and violence in our country, but it was also a confessional act of being honest with God, each other and ourselves about the ways we continue to perpetuate systems which continue to cause trauma and harm. Such confession is hard work. Yet, I believe it is the only way to move toward a Christ-like reconciliation and justice we are called to work for and embody," said the Rev. Shana Johnson, Illinois South Conference Minister. "Often we sing 'let there be peace on earth and let it begin with me,' yet we underestimate the need for us to begin with ourselves."

In Montgomery, the group walked in the footsteps of the Rev. Martin Luther King, Jr., and took a photo on the steps of the Dexter Avenue Baptist Church, where he was a pastor. They visited the Legacy Museum to trace the connection between enslavement and mass incarceration. At the National Memorial for Peace and Justice, they saw the stories and the names of enslaved black people, of African Americans terrorized by lynchings and the humiliation and oppression of racial segregation and Jim Crow Laws. 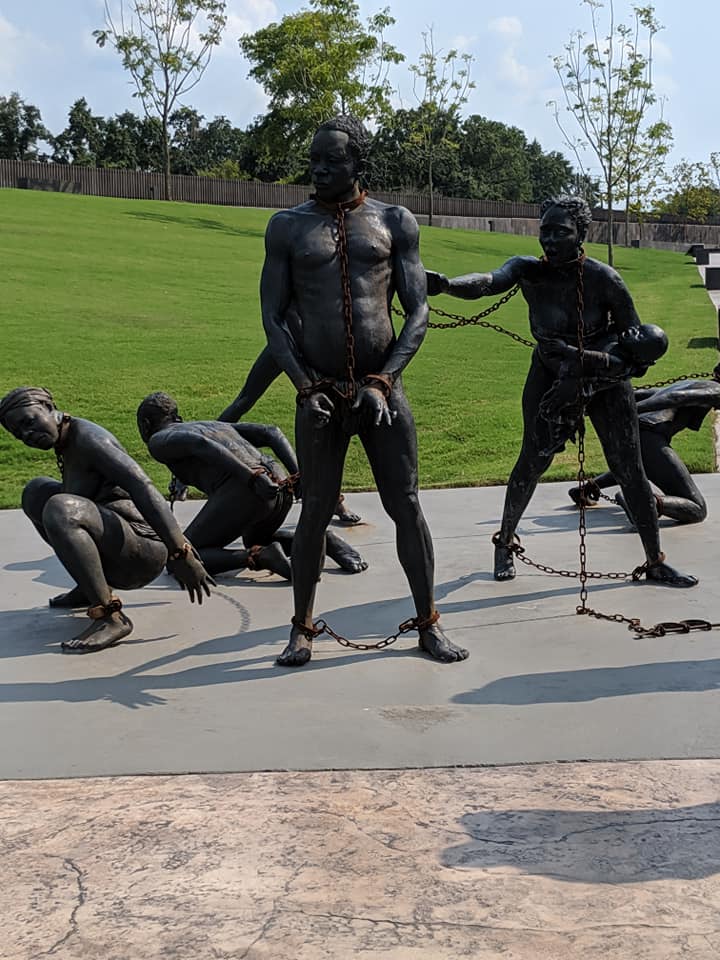 "The Legacy Museum and the National Memorial for Peace and Justice powerfully illustrated the connection between the Atlantic Slave Trade, the domestic slave trade, Jim Crow, lynchings, the convict lease system, state sponsored segregation, ‘law and order' politicians, and mass incarceration - a single thread of white supremacist terrorism and violence," said the Rev. Campbell Lovett, Michigan Conference Minister. "I was embarrassed and ashamed that the witness of the Christian church was easier to be found in support of white supremacy than against it."

Johnson, who said the memorial site "absolutely flattened me emotionally" was wrecked by the section of the Memorial where it lists the stories why people of color were lynched.

"The reasons for the hangings ranged from 'challenging a white man' to 'looking at a white woman.' It seemed unbelievable that at one time such things were reasonable offenses to justify the killing of people of color. Yet, the reality is in our country it is still happening. It was certainly not lost on me the incredible burden all people of color carry with the continued presumptions of guilt, violence, and death."

"What was most moving was to witness the casket-like symbols hanging in the Memorial to the victims who had been lynched, burned, and murdered," said the Rev. Edward Davis, Southern Conference Minister. "I saw in my mind the victims hanging from the trees and their lifeless bodies on display for people who saw the occasion as a form of entertainment. I could only say, it could have been me.

"I also learned in Montgomery the power of the pulpit to inspire masses of people," Davis said. "We visited Dr. King's Dexter Avenue Baptist Church where he inspired his congregation to protest against the injustices. I experienced what it must have been like to cross the Edmund Pettis Bridge in Selma doing the civil rights movement where people were beaten and murdered fighting against the oppressive conditions. I felt the spirit of those who were victimized on that day as well as their courage." 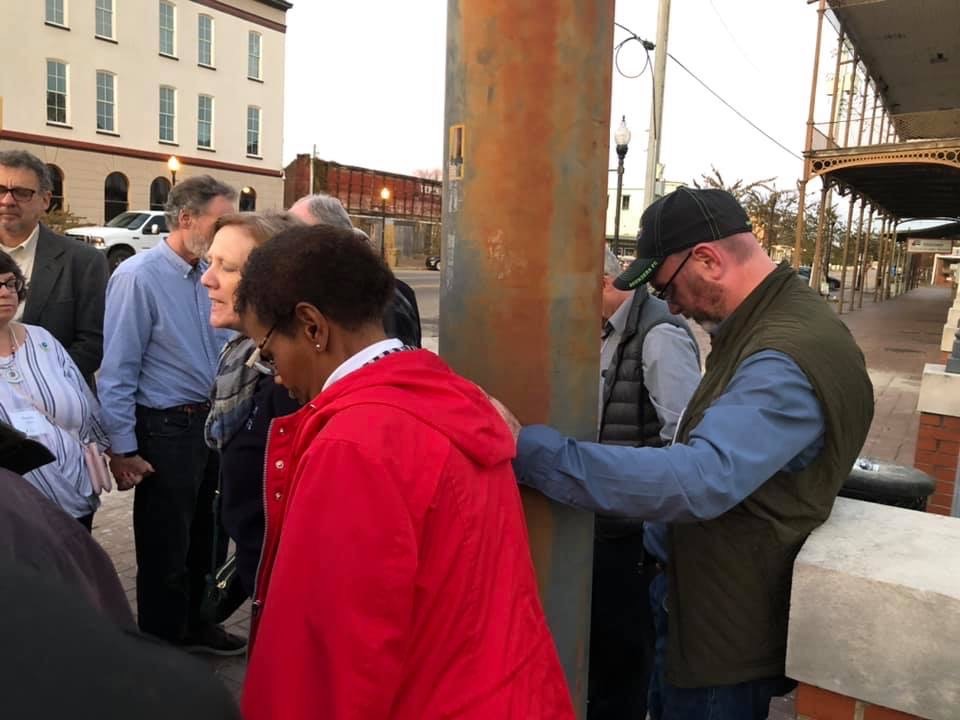 In Selma, the group walked across the Edmund Pettus Bridge and prayed together after visualizing the "Bloody Sunday" march of March 7, 1965. Hundreds of people marching for voting rights were headed out of Selma and attacked six blocks away by state and local law enforcement officers armed with billy clubs and tear gas.

"This was my second time through the spaces we visited in Montgomery and Birmingham. It was my first time in Selma," said Thompson. "I was struck once again by the courage of the men and women who put their lives on the line. I was moved by the pictures of young people being fire-hosed and facing down dogs. They were determined to fight for their rights, even at the expense of their lives. Change requires courage and that was seen as men, women and children took great risk for a different world."

"We put our feet to our sermons about dismantling racism by travelling together to the sacred sites of our ancestors in Montgomery, Selma and Birmingham, who courageously fought for the human rights of persons of color in the United States," said the Rev. Ginny Brown Daniel, Missouri Mid-South Conference Minister and member of the trip's planning team. "Rev. Freeman Palmer (Atlantic Conference Minister and another member of the planning team) led us in freedom songs in our worship and on the bus from Montgomery to Selma. Like the Psalms that were sung to Jerusalem, these freedom songs reminded us that we join a great cloud of witnesses committed to freedom. In the words of Ella Baker, "We, who believe in freedom, will not rest. We, who believe in freedom, will not rest until it comes.'" 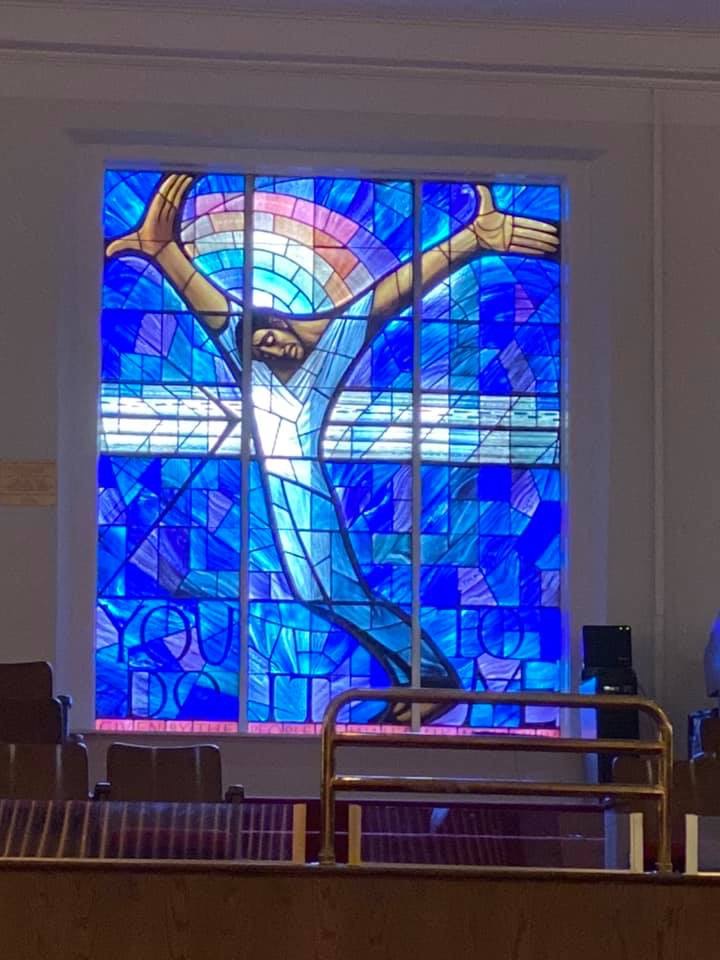 In Birmingham, the group toured the 16th Street Baptist Church, where a bomb blast killed four little girls before church services in September 1963. Davis said he found that "atrocity quite disturbing. The violence that was perpetrated lacked not only a value for human life still so young, but it happened within the sacred realm of the Church."

"As a graduate of an HBCU (Historically Black College/University) and a child of two black educators, I knew much of the history presented," Kendrix said. "What I learned is how close to the surface the emotional impact this experience was for me. My reaction was visceral. One sentence that I read stood out for me. It said, 'In 2015, an unarmed black person was killed by the police somewhere in America every two weeks.' As the mother of a black son and grandmother of four black grandsons, this snippet of knowledge ratchets up my fear whenever my boys are not in my sight.

"We had a chance to hear from 3 black elders, all of them UCC members, who were able to relate what it was like to live in Birmingham when black homes and black churches were being bombed regularly in an effort to stop the demand for civil rights," Kendrix continued. "Their testimony took what might have felt like history and made it feel current."

After spending their days touring and learning, the group also came together for discussion and prayer.

"This experience is a difficult one to put into words. It was profound. It was important for us as UCC leaders to confront our nation's legacy of racial violence and injustice and to confess the Church's complicity in that legacy. We wanted to offer our collective witness to the sin of racial oppression that continues to this day and cultivate a deepened commitment to our anti-racism work within the UCC," said Minnesota Conference Minister, the Rev. Shari Prestemon. "This was also a journey of the heart and spirit. It required us to practice vulnerability and grace with each other as each of us navigated complex emotions and, in some cases, painful trauma on this journey."

"Our hope as a Council of Conference Ministers is to model what it means to take seriously this aspect of peace, a commitment to personal transformation that can have a ripple effect in the communities and Conferences we serve," Johnson said. "We all must wrestle with our own stories, experiences, biases, and mistakes. I cannot look away, not listen, or not take seriously the painful realities our siblings of color face daily. It is my Christ imperative and it is yours as well to work for a just world for all of God's people."