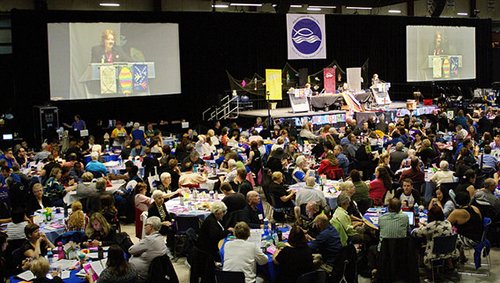 The only two United and Uniting Churches in North America have now forged a full communion agreement in the spirit of Christian unity. The United Church of Canada unanimously adopted a full communion agreement with the United Church of Christ during its 42nd General Council on Thursday, Aug. 13, paving the way for a long-lasting relationship between two denominations that share a passion for justice and peace.

The move by the United Church of Canada follows the UCC General Synod's adoption of the same agreement in late June. The Rev. Karen Georgia A. Thompson, the UCC's ecumenical and interfaith officer, described the moment as "an exciting and promising time." The General Council is gathered in Corner Brook, Newfoundland, from Aug. 8 to Aug. 14.

After the United Church of Canada voted in favor, a video was shown in which the UCC General Synod approved the communion and sang "O, Canada’ before the video ended in mid-song, prompting the General Council to complete "O, Canada," then launching into a rendition of the "Star Spangled Banner."

Both churches have common ecumenical partners and have similar views on social justice work, the inclusion of LGBT people and ordination of women.

A full communion agreement allows two or more churches to recognize each others’ sacraments and the ordination of ministers, granting ministers the privilege to be called by congregations of either denomination. This is the UCC's fourth full communion agreement and the first for the United Church of Canada, the largest Protestant denomination in Canada with about 3 million members in more than 3,500 congregations.

"There is more to be done with mutual recognition of ministers," Thompson said. "This is a body of work that will move us along as we consider ways in which we can do mission together."

Now with both sets of resolutions approved by the General Synod and General Council, the churches will sign a formal document and have a joint liturgical celebration, which will be planned for October.

"As we move into next steps, the first item will be getting our two churches together for a time of worship and liturgical celebration," Thompson said. "Our faith is essential, as is the understanding that the presence of God is with us. The time of celebration is important as we commit to the intentional journey together."

Among the other actions taken during the meeting in Canada, the General Council made a decision to sell $8.7 million (Canadian dollars) in holdings in fossil fuels and invest instead in renewable energy. At its 2013 General Synod, the UCC approved moving toward divestment in fossil fuels as one strategy to combat climate change.

The General Council also joined the growing divestment movement related to Israel-Palestine, calling upon the church to divest from "all corporations and institutions complicit in and benefitting from the illegal occupation [of the West Bank and Gaza]." That action is similar to the General Synod's passage of a resolution in June that called for divestment and boycotts of companies profiting from the occupation, which is considered illegal under international law.

"The United Church of Canada’s attention to the issues related to the Israeli occupation reflects its deep commitment to justice and peace in the Israeli-Palestinian context," said Peter Makari, UCC area executive for the Middle East and Europe. "To encourage and to promote education and advocacy about the use of economic measures, such as divestment from and sanctions against companies profiting from occupation, is to witness to non-violent means of addressing this injustice."