It dawned on United Church of Christ member Carol Matheis-Kraft that her local government had certain ways of helping low-income people, but providing affordable housing wasn't one of them.

That was in 2015. Now, after four years of preparation, paperwork and partner recruitment, her church in Longmont, Colo., is about to welcome low-income neighbors onto land it donated to house them. Ten tenants will move into six new "microhome" apartments on a quarter-acre next to UCC Longmont, in a city where housing is becoming less and less affordable.

The Micah Homes are scheduled for December occupancy. Built by The Inn Between, a nonprofit specializing in housing, they include four one-bedroom units (450 square feet) and two two-bedroom units (750 square feet). Residents will share a community room, laundry facilities and a courtyard.

Depending on the families that will occupy them over time, the apartments can hold up to 14 people. Among the inaugural tenants are a couple who lost their home due to medical bills resulting from an accident and were once living in a camper; a single senior citizen; and a parent and her autistic son.

The church did provide the land, but actually, "donated" isn't precisely right, Matheis-Kraft says. The church and The Inn Between split significant preparatory costs. And, per a deed restriction, the property will revert to the church if it ever stops being used to house people whose income is at or under 40 percent of the local median; for now, residents will be under 30 percent.

"Reading about this project was one of the things that really got me excited about this congregation when I applied," said the Rev. Sarah Verasco, who moved from Connecticut in 2018 to be UCC Longmont's senior pastor. "I told everybody about it. I was so impressed."

The idea emerged from a long history of affordable-housing work at UCC Longmont (that's the name it uses now; it was originally First Congregational Church and is still legally

First Congregational UCC). The church has provided years of financial and volunteer support to organizations that offer a hand up to people in need, including The Inn Between and the OUR Center, which helps people move toward self-sufficiency using community resources. UCC Longmont members built a home with Habitat for Humanity, went to Mississippi five years in a row to help build housing at UCC-related Back Bay Mission after Hurricane Katrina, and rebuilt homes after a Colorado flood. Next year, they're going to Puerto Rico to help with hurricane recovery.

But over those same years, the housing stock in and around the city, a half-hour northeast of Boulder, has changed. In the past, "if you couldn't afford to live in Boulder, you moved to Longmont," Matheis-Kraft said. Now Longmont's own median income is close to $100,000. The city used to have a law that ensured affordable housing. It required developers to build a percentage of affordable units in all new projects, or to contribute financially to housing programs. That policy ended after the Great Recession 10 years ago. 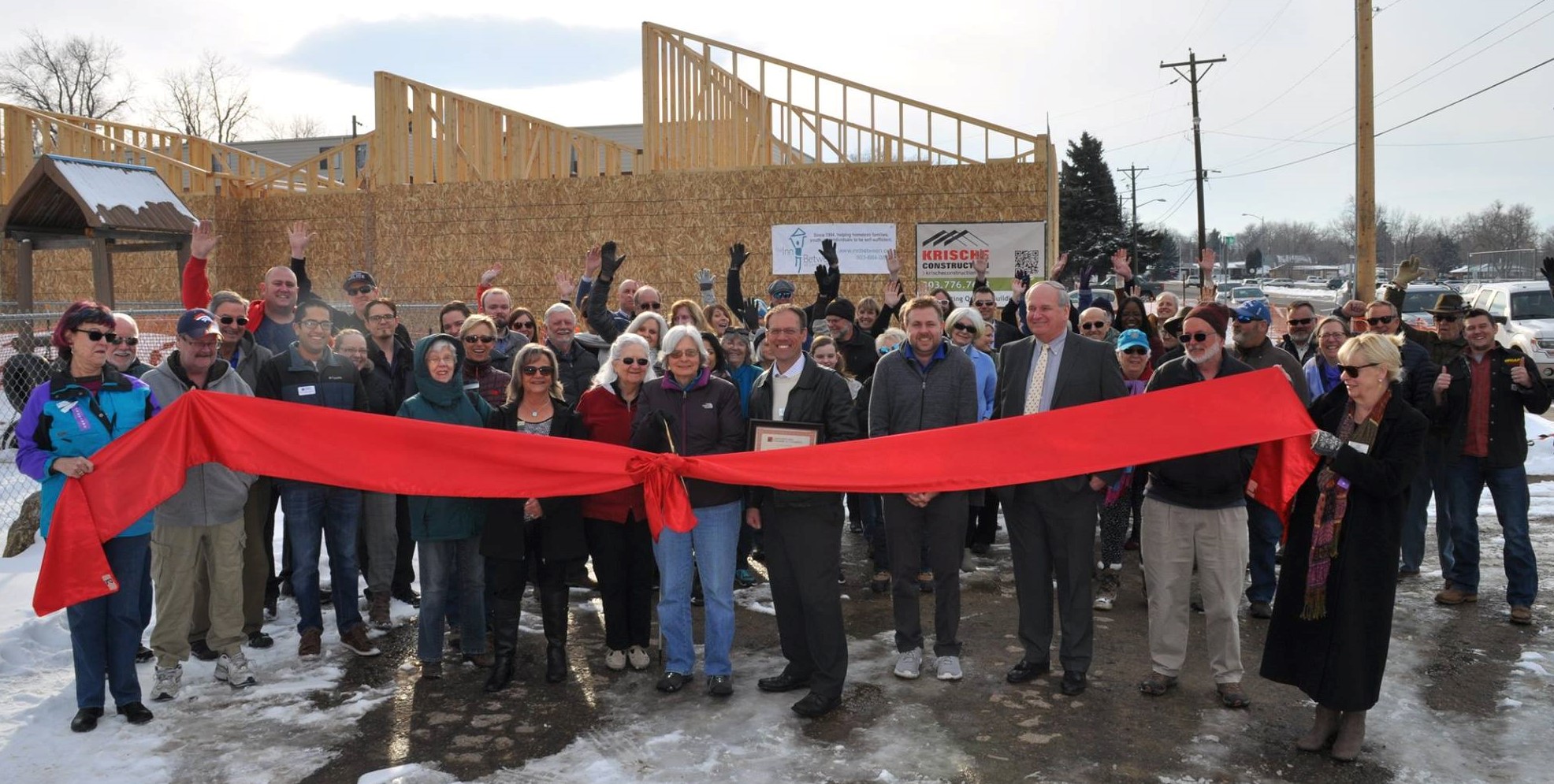 "There is a large population that requires assistance in this area," Verasco said. "There have been changes to surrounding communities – Boulder, for example, which deconstructed various homeless camps. People come to Longmont. It’s a little bit more accessible." Those facing food insecurity, mental health needs and even housing insecurity can find services there, she said – but they can't necessarily afford a place to live.

"In September 2015, I was on the board of the OUR Center, and we were advocating with the City Council because of the great need for affordable housing," Matheis-Kraft said. "It was really obvious that the city might help people, but they weren’t going to go out and do affordable housing."

That was when inspiration struck her about the church's own land.

'Why not use that land for housing?'

"We had a 100-year-old house sitting on our property," Matheis-Kraft said. "We had owned it for 50 years. The church custodian lived there for a while. A hospice had offices there for a while. The youth group used it. But it wasn't used to its potential. I thought, why not tear it down and use that land for housing?"

She checked with the church's leadership and got green lights to pursue the idea further. She wrote it up. She discussed with others in the church, including book clubs and Bible-study groups. A three-person task team was formed.

Two key insights came out of a process that involved lots of research, legwork, conversation and multiple congregational meetings:

The church needed more parking. In the past, church members parked in a high school lot across the street; now it's an athletic field. So instead of simply putting new housing where the old house was, it was decided to "re-plat" three existing parcels to allow for parking as well as new housing.

The church wasn't very good at being a landlord. Besides its underused old house, it owned a mobile home at another location. Renting it out – though it had brought income that could be used for this project – had not gone very well. A partner was needed.

The Inn Between, specialist in supportive housing, emerged as the right match. The two crafted a legal "memorandum of understanding." The church would deed the land to The Inn Between, pay for preparatory costs such as re-zoning and re-platting (close to $16,000) and provide staging room for construction equipment and materials. The Inn Between would spend a similar amount to demolish the old house, raise money for the Micah Homes (it’s about a $750,000 project), build, own and manage the apartments, and select tenants from among the people it assists. The couple that had been living in a camper, for example, are currently in one of The Inn Between's transitional housing units at another site.

'What it means to be a good neighbor' 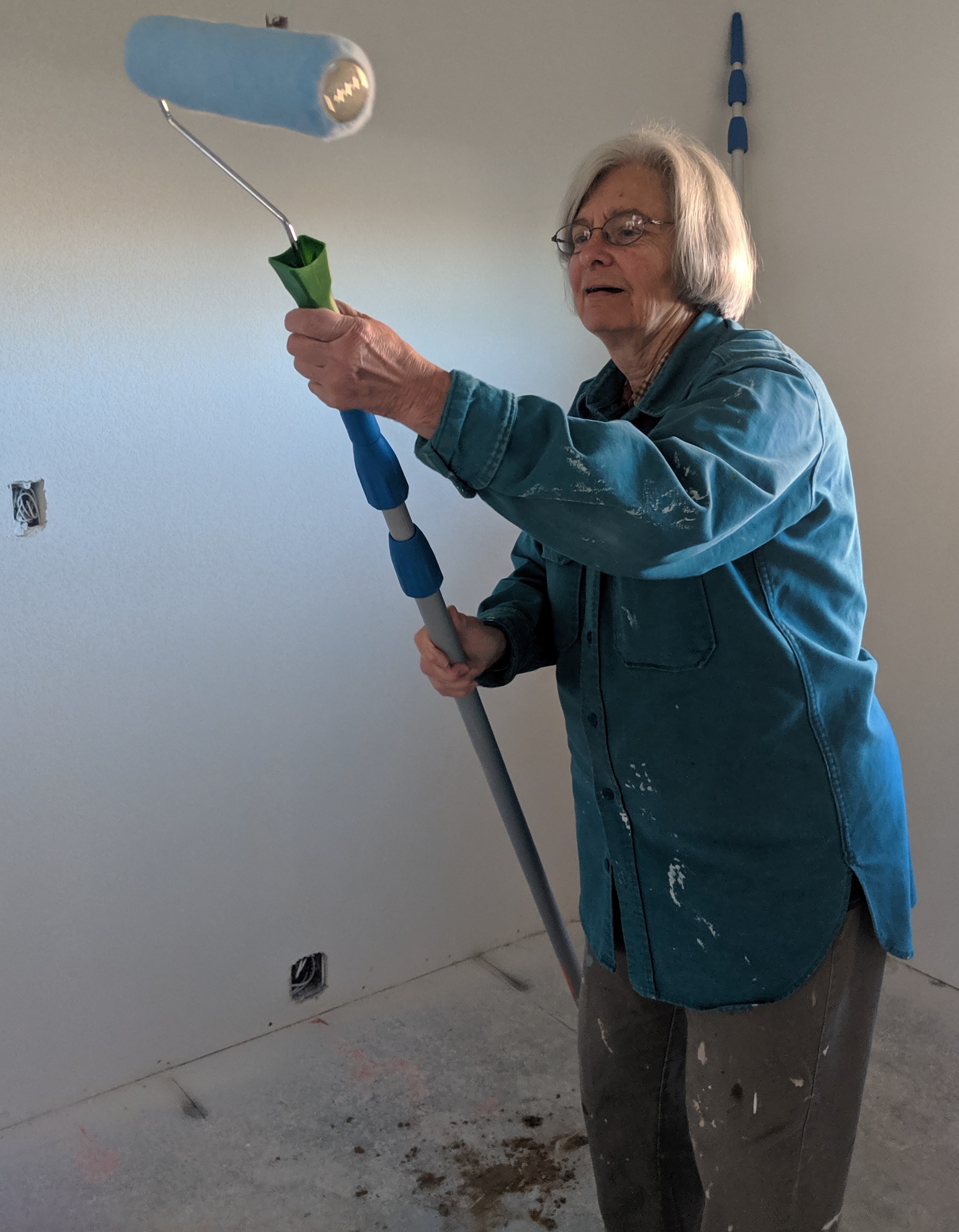 From the start, church members have pitched in. A lawyer helped with legal papers. An electrician helped figure out parking lot lighting. In recent weeks, work crews helped install windows and joined a painting party along with other community volunteers. Teams are being formed to help residents move in. People are standing by to sew curtains, assist in decorating and make prayer shawls. "The local Quilt Guild has made six quilts," Matheis-Kraft said. "They're sitting in my basement."

Then, Verasco said, "we’re going to practice what it means to be a good neighbor – knocking on the door, saying hello, learning a little bit about the person, finding out if there's something in the church community they want to participate in; if not, helping them to connect with something in the neighborhood."

The pastor said she sees spiritual signs in the whole project: Not only in the church's extraordinary generosity in giving away such precious property, but in the way one energetic person's idea caught fire and was modified over time. "Carol is a force of nature, and so is the Holy Spirit," Verasco said. "The Spirit worked through her, but it engaged the community. Carol was one voice that led the charge. Other voices came in to shape it."

Verasco and Matheis-Kraft said they would be glad to share stories and advice with other congregations considering similar projects. Two immediate pieces of wisdom: Keep the core project team small and involve lots of others ad-hoc ("we probably had 15 or 20 people who contributed at different times," Matheis-Kraft said). And while good communication, broad input and due diligence are essential, you also have to take a leap of faith.

"Put your hand on the plow," Verasco said.

"Just do it and don't stew over it," Matheis-Kraft said. "Just forge ahead."