Clevelanders of faith show up for young people’s Climate Strike

Energized by an interfaith chapel service, some 75 Clevelanders of faith – including members of the United Church of Christ's national staff and local churches – showed up to support a youth-led Climate Strike that drew a couple hundred people downtown on Friday, Sept. 20, a day of similar demonstrations around the world.

The Public Square action centered around an elevated podium marked by a simple hand-painted sign, "School strike for climate." "If you're not fighting the climate crisis, you're contributing to it," said one of the student speakers, Marina DeNunzio of suburban Shaker Heights High School.

Young leaders at one point handed the microphone to the Rev. Brooks Berndt, UCC minister for environmental justice. He said his daughter, a second-grader running for student office at her school, is hoping to lead a fun day where everything's backwards. Taking up that theme, he said the U.S. was headed backwards on regulations and other policies that could help reduce carbon emissions, promote clean energy and reverse the climate crisis. Then the crowd joined him in a chant. As Berndt called out each dangerous trend, the 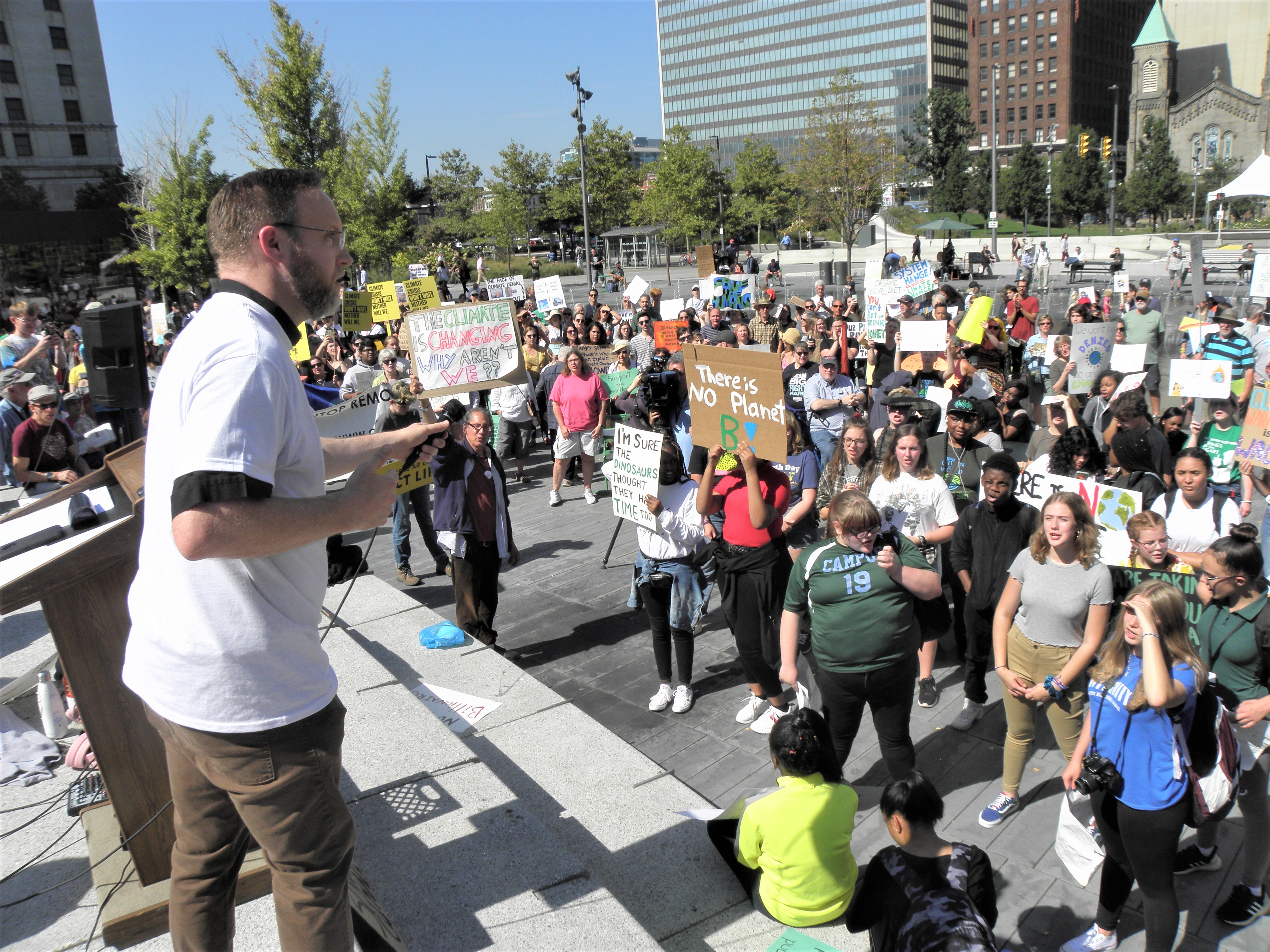 crowd responded, "Turn it around!"

Berndt also led the pre-rally interfaith service in the Amistad Chapel at the UCC national offices. People from several religious denominations and climate-action organizations sang, prayed and heard about the urgency of counteracting climate change. Participants ranged from the Citizens' Climate Lobby, to Rabbi Enid Lader of Beth Israel – the West Temple, to the Rev. Zachery Williams of the Northeast Ohio Black Health Coalition. Teen faces and voices came by video from Rishi Ranabothu, a youth member of North Carolina Interfaith Power and Light, and Solana Postma, a member of First Congregational UCC of Manistee, Mich., organizer of a climate strike there.

In a welcome, the Rev. Doug Horner, pastor of St. Paul's Community UCC, Cleveland, noted the city's pivotal 50-year role in the clean-water movement, starting with the cleanup of the Cuyahoga River. "Tonight my wife and I will go paddling on the river in our new kayaks," he said – something possible only because people and government acted to stop pollution. 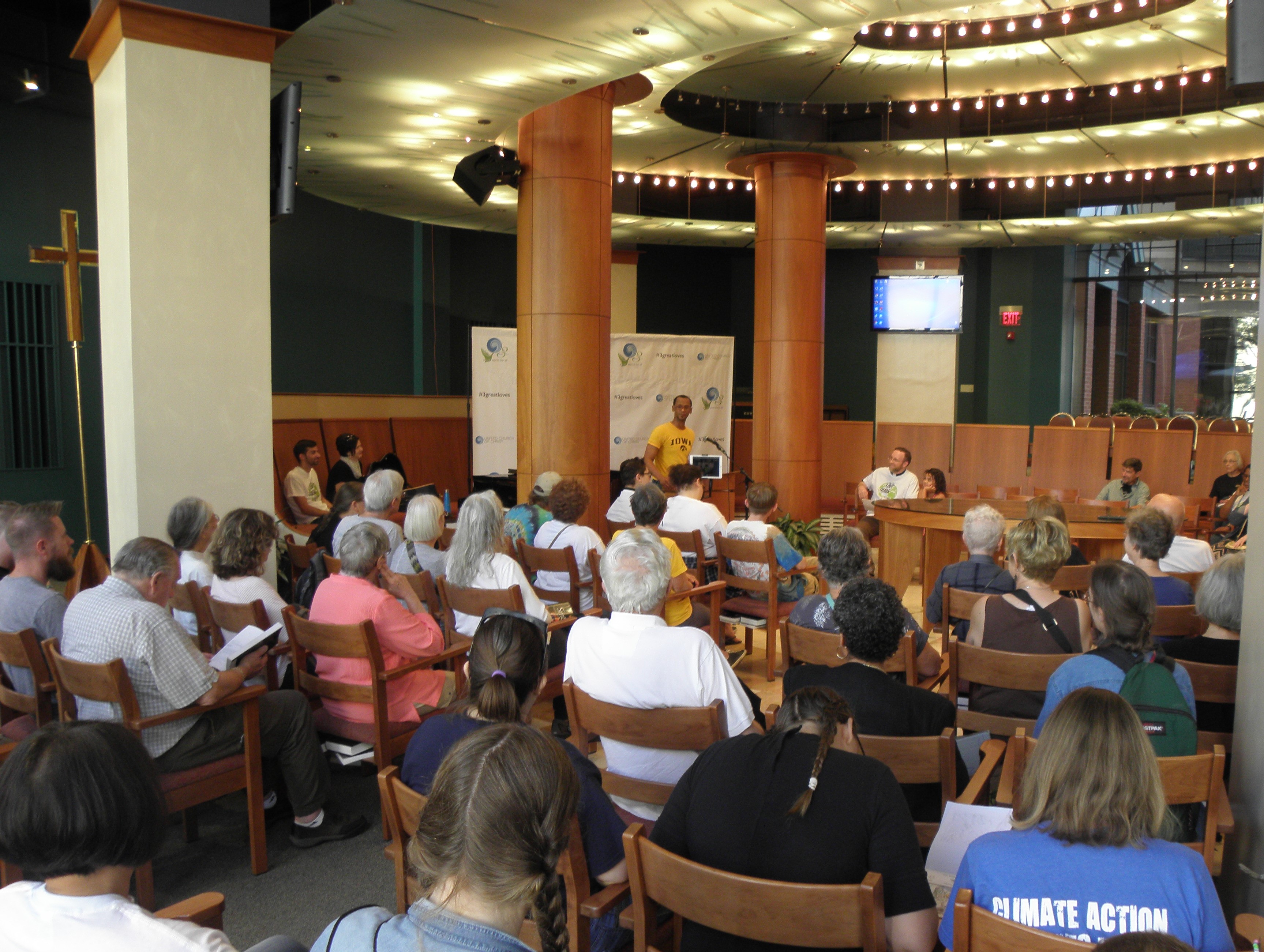 "We are striking all over the nation today – our youth – and supporting them all over the nation," said Alycia Ashburn of the staff of Ohio Interfaith Power and Light, one of 40 U.S. IPL chapters. "Our mission is to inspire and mobilize people of faith and people of conscience to take bold and just action on climate change.”

Northeast Ohio Sierra Club representative Chad Stephens told the gathering that he will soon be married. "I hope to have a family," he said. "And I would hope that, when that happens, my children wouldn't have to deal with a planet that is dying." He fired up the congregation with a call and response: "What are we gonna do?" "Stand up and fight!"

The Rev. Velda Love, UCC minister of racial justice, said government and corporate powers that worsen climate change through action or inaction must be opposed. She had the chapel crowd join hands and sent them out with a benediction: "Rebel, resist and do justice, all in the name of our God. Amen. Go forth." 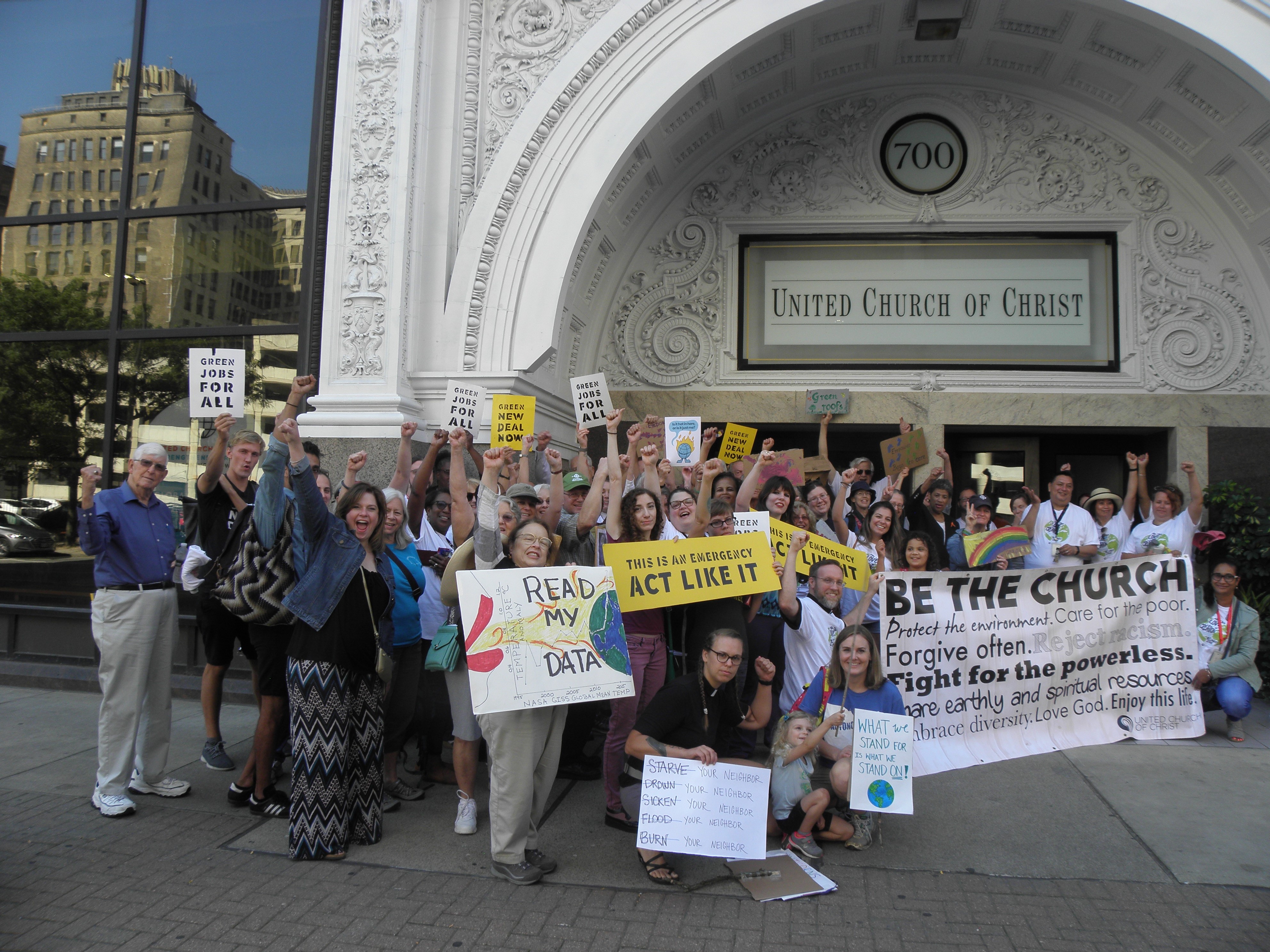 At the Square, Berndt thanked student leaders and participants who had missed school and adults who had taken time off for the rally. He also thanked the UCC national ministries for giving employees permission to attend. "We come out of a faith tradition that believes at times it's necessary to disrupt business as usual," he said.

Youth-motivated climate activities around the country continue through Sept. 27. Watch the News section of ucc.org for more Climate Strike coverage as reports come in from UCC people taking part.