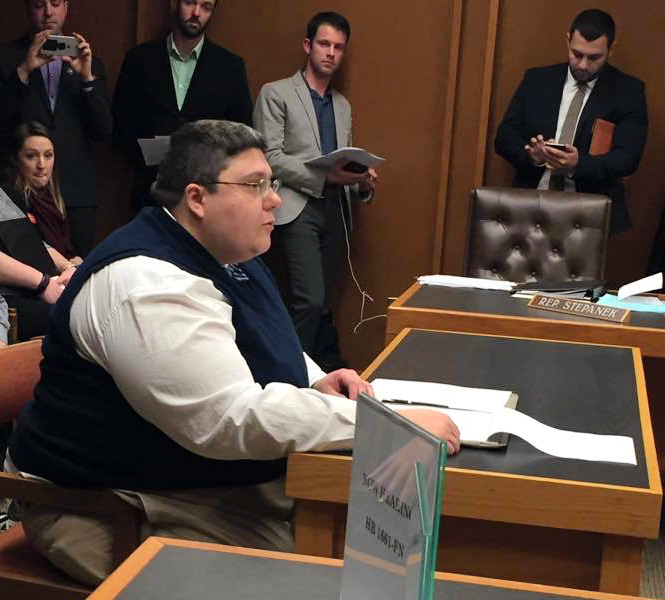 The Rev. Emily Heath testifies before a committee of the New Hampshire House of Representatives. Photo via Faceboook.

New Hampshire is in headlines this week with the upcoming presidential primary, and a United Church of Christ pastor was among the headliners who addressed state lawmakers Feb. 2 in support of a proposed bill that would ban anti-gay "conversion" therapy.

Called by faith to protect LGBTQ children and youth, the Rev. Emily Heath testified on Tuesday in favor of a New Hampshire bill (HB1661) that would prohibit such therapies on minors. Conversion therapy, or reparative therapy, is a practice that aims to change someone's sexual orientation from homosexual to heterosexual.

When the bill came up unexpectedly, Heath, senior pastor of the Congregational Church in Exeter and a member of the UCC Board of Directors, was asked to testify. The night before addressing the committee, several UCC members reached out to Heath in support. The next day, she was in the state capitol of Concord, N.H., for the committee hearing. Heath also learned that one of the co-sponsors of the bill, Rep. Alexis Simpson, is a member of Congregational Church in Exeter.

Heath, who is an LGBTQ person, was one of a handful of people who spoke to the committee in favor of the bill. The pastor told the committee that when she came out, she was embraced by clergy, professionals and a pastoral counselor, and because of that support, Heath discerned a call to ministry and was ordained.

"[T]oday," Heath said, "as a disciple, as a pastor, and as a New Hampshirite, I am asking you do what Christ told his followers to do: Let the little children come to him, and put no stumbling blocks in their way."