Churches come together in Missouri after wild weather

A flooded sanctuary, a displaced pastor, a congregation scooping ice cream for disaster relief, and a church serving as a Red Cross Shelter – not to mention a new disaster coordinator trying to keep up as he organizes relief efforts in his community.

This is how the first week of June shaped up in the Missouri Mid-South Conference United Church of Christ after swelling rivers, overflowing streams and the resulting floods closed hundreds of roads in the state, and forced residents from their homes.

The Rev. Jeanne Lischer, pastor of Ebenezer United Church of Christ, in Levasy, about 30 minutes northeast of Kansas City, had just an hour to evacuate on June 1 when floodwaters flowed into the sanctuary and into her neighboring home.

“We were watching the water rising all morning Saturday, trying to decide whether or not to leave,” Lischer said. “By noon, it was rising more quickly-a levee had broken by then. One of the issues for me was what to do with our dog and 2 cats, since we couldn't take them to a hotel.” 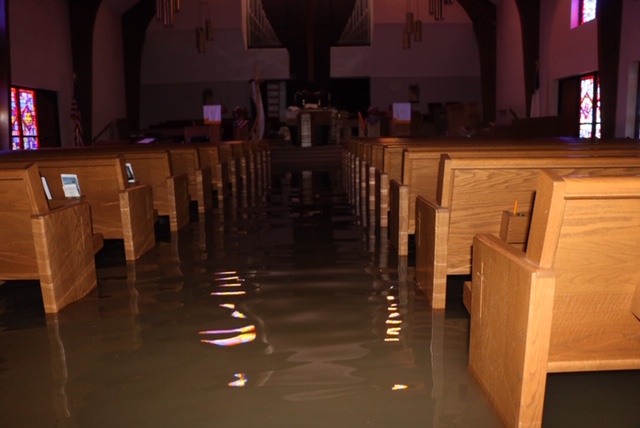 She called the vet, was able to board her animals, and she and her daughter took off with whatever they could carry.

“By the time we left, the water was up to my knees and a church member carried the dog out,” Lischer continued. We’d already cancelled worship for June 2. We went to a hotel that night, and by the next morning, arrangements were being made for us to move to a vacant house. Church folks brought us furniture, towels, bedding.”

That Sunday evening the people of Ebenezer UCC gathered for hymns and prayers at the church cemetery, a few miles south of town and high on a hill. “By that time we knew the worst,” Lischer said. “Nine inches of water in the church, two inches in the parsonage.”

There was a lot of water in Levasy and since virtually no one has expensive flood insurance, the small town (population 85) a mile south of the Missouri River may never be the same. But the UCC congregation is sticking together – gathering on Pentecost Sunday in rented space in the nearby town of Buckner for worship. Lischer’s June 9 sermon was aptly titled, ‘Wait. Pray. Breathe.’ 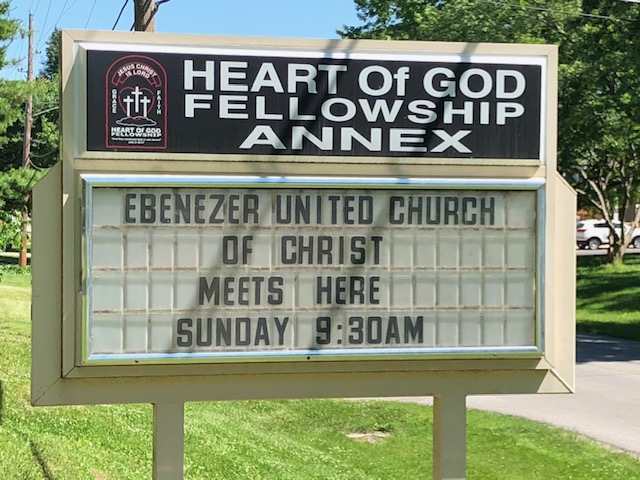 “In those fifty days between Easter and Pentecost, the disciples were anxious and uncertain.  They gathered to pray. And when the time came, they were ready to take on new challenges,” she said. “We also are anxious and uncertain. Everything is different today – we’re in a space that’s not our own and it will take some getting used to. We have no idea when the water will go down enough for us to get into our homes, into our town, into our church, to assess the damage. But we’re here. Together. And we’ll keep gathering, and singing, and praying, and remembering who we are. Ebenezer has lost its beloved church before, so you know – perhaps better than most – that the church is not a building.”

Before worship, Lischer and her daughter were able to return to the parsonage in a kayak to retrieve clothes, meds and personal papers. “We’ve been told it will likely be 6-8 weeks until the water goes down enough to drive into town and maybe begin clearing out the muck,” she said, “and that’s if it doesn’t rain anymore.

“The Spirit was – and is – the breath of God, the breath which gives us life. Right now, we’re overwhelmed. So we wait. And we pray. And we breathe.” 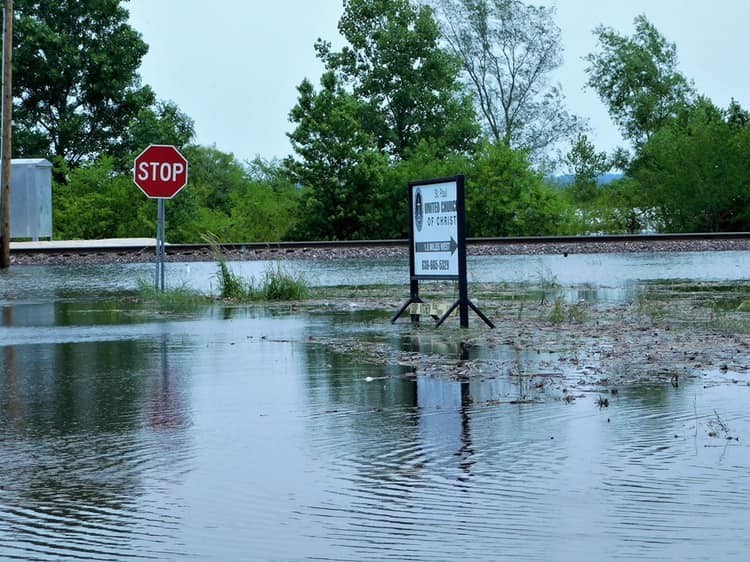 The Rev. Michael Kasevich, pastor of St. Paul United Church of Christ in Old Monroe has little time to catch his breath. As the new Missouri Mid-South Conference Disaster Coordinator, he is working to keep up with the needs in his Conference and his community, northwest of St. Louis, just west of the Missouri River. The highway in front of his church is underwater, and almost two dozen neighbors are staying in an emergency shelter at Winfield.  Last week, St. Paul UCC sent food, cases of bottled water, along with toiletries and clean up supplies to the local county emergency management association. He also just sent out UCC Disaster Ministries solidarity grant applications to a handful of churches who requested them.

“In Eastern Missouri, the floods have taken over most of the towns,” Kasevich said.

The people in the capital of Jefferson City were preparing for flooding when a tornado touched down May 22.

Leaders of Central United Church of Christ in Jefferson City had already intended to host an ice cream social on Sunday, June 9, a church fundraiser and opportunity to reach out to their neighbors. After the deadly and destructive storm devastated some of those neighbors, Central decided to use the proceeds instead for tornado relief.

“We haven’t designated funds yet and will probably decide on what organizations next week, but we have $2,000 to donate for tornado relief,” said Warren Witt, president of the Central Church Council. “My impression is that more members of our community showed up because of the tornado.” They also came out for the ice cream.

“The ice cream was awesome,” Witt said. “We had hamburgers, hot dogs, a lot of homemade cakes and pies, but the homemade ice cream (Roland’s famous) was the hit.”

A good time was had by all, with recovery efforts top of mind.

“Everywhere you look, friends, families, neighbors and strangers are working together, donating time, talent, supplies, food and funds to help in the efforts to rebuild and recover,” Central Church noted in a Facebook post. “This is ‘community’ in the truest sense of the word.”

“At this moment we are only providing space for the Red Cross emergency shelter – they’ve got everything well under control and have their own volunteers,” said the Rev. Lisa Martin, Saint John’s senior pastor. She said the number of people staying overnight varies, but the shelter serves a steady crowd. “The Red Cross is also providing food from local restaurants and many more are coming in for meals.”

The Church Council approved extending the shelter through June 19 and will undoubtedly extend it further if asked, Martin noted. “I expect we will be actively involved in the clean up afterwards. Right now everyone is waiting for the water to recede. I walked down to Main Street today to see how high the Missouri had gotten, and it is almost to the river road, but does look like it’s gone down an inch or two. Hopefully the worst is over.”