The COVID-19 pandemic kept them from setting up voter-registration tables. So the people of Douglas Congregational United Church of Christ in rural western Michigan adjusted.

They are giving free rides to early voters instead.

The importance of doing so was explained in the church’s online Sunday worship service Oct. 18, using materials from the UCC’s Our Faith, Our Vote project. The theme of the service was “Our Faith, Our Vote, Our Voice.”

During his sermon, Douglas UCC’s pastor, the Rev. Salvatore Sapienza, displayed a statistical image. It showed that some 108 million Americans had not voted in the 2016 presidential election. “That is absolutely outrageous,” he said. “I believe that voting is not only a civic duty, but that it is a moral imperative for us.”

The provide-a-ride program, covering three communities in rural Allegan County, is the church’s way of inviting the entire community to carry out that duty.

The “voter shuttle” idea arose this year when it became clear that door-knocking and in-person registration tables – like the one the church had in its Friendship Hall during the 2016 election season – would be too risky in a pandemic, Sapienza said. He said he had also heard concern in the community about in-person voting as well as mail-in voting.

So throughout October, the church has publicized its shuttle service via social media, ads in a local weekly newspaper, and a radio show the pastor hosts. People wanting rides can send an email to votershuttle@douglasucc.org. The church’s 12 volunteer drivers cover five ballot drop-off locations serving the villages of Douglas, Saugatuck and Fennville and their surrounding areas.

By mid-October, the church had given rides to about 20 voters, but Sapienza said he hoped there would be many more requests by the end of the month with the approach of the Nov. 3 election. 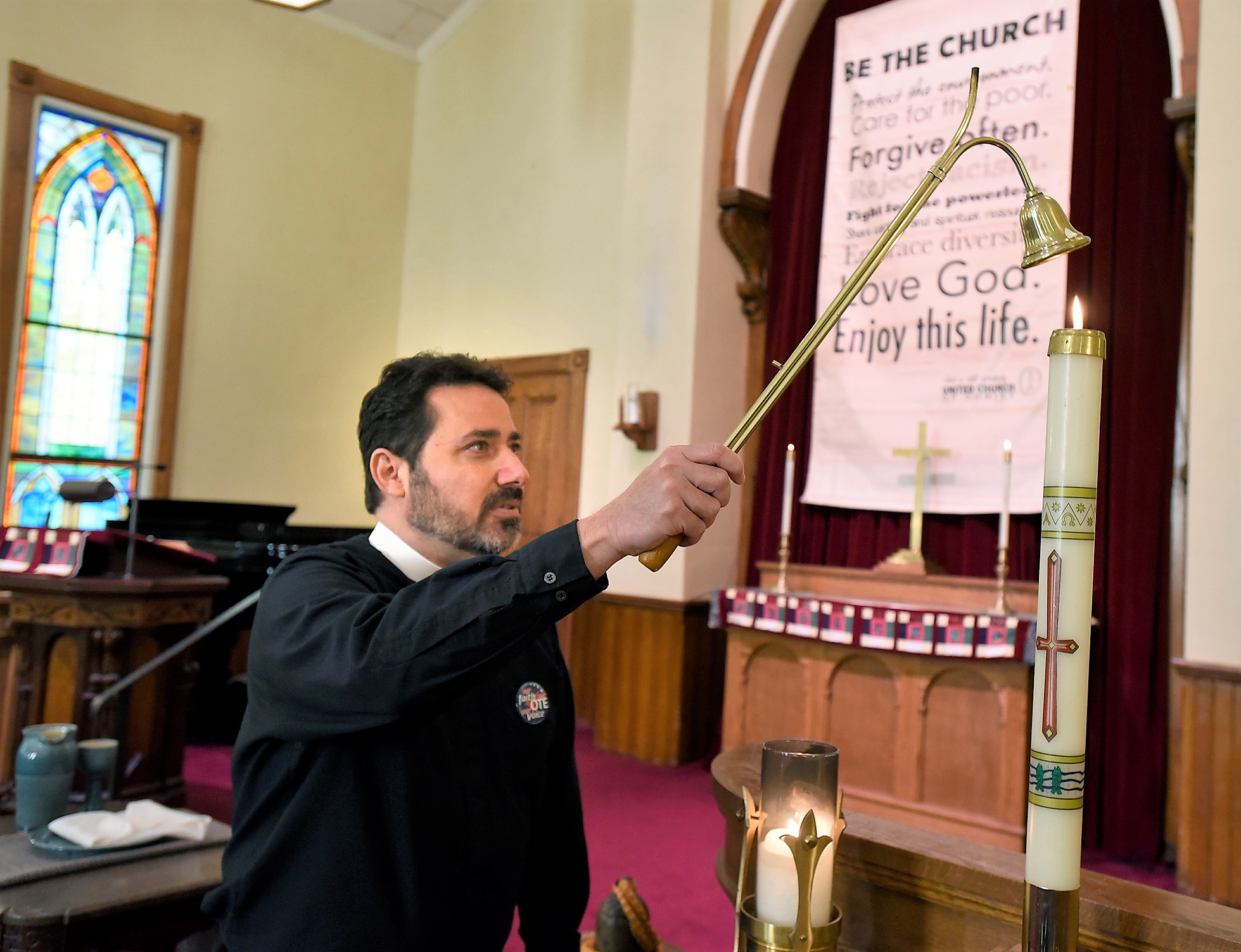 And the project is strictly nonpartisan. “No campaign buttons or talk of politics are allowed,” he said.

‘You get to choose’

Sapienza also emphasized that point during his Oct. 18 sermon, noting that Douglas UCC has Republicans, Democrats and independent voters among its members. Whatever their party, or lack of party affiliation, he encouraged parishioners to vote their faith and conscience.

“One thing that unites us all is the mission of our little church,” Sapienza said. “Our church’s mission statement, which was written more than 15 years ago, says that we are a church that strives for justice.” He noted the popular UCC “Be the Church” banner hanging above the altar, with phrases like, “Protect the environment,” “Care for the poor,” “Reject racism,” Fight for the powerless” and “Embrace diversity.”

“So if you love this banner, remember it when you cast your vote,” he said.

He also invoked Paul’s Letter to the Ephesians. “In our scripture reading today Paul gives us instructions for leading a good Christian life,” he said, naming such characteristics as love, joy, peace, patience, kindness, goodness, faithfulness, gentleness and self-control. “So as a person of faith, before you cast your vote, consider which presidential candidate best exemplifies those fruits of the spirit for you. You get to choose. You have a vote. You have a voice. So make your voice heard, and put your faith into action.”