Church camp in Chicago provides a place for all God's children 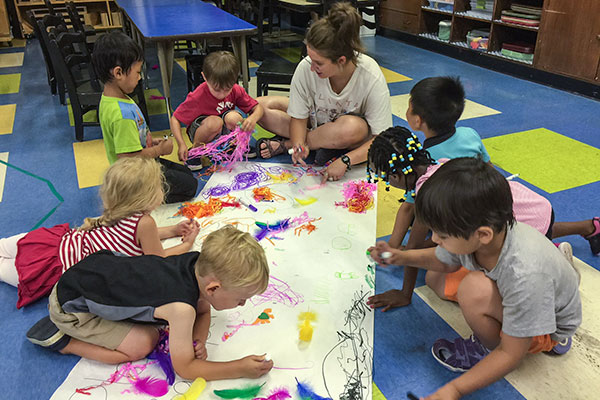 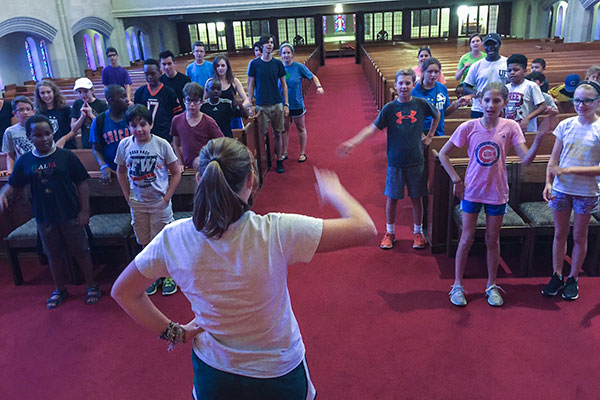 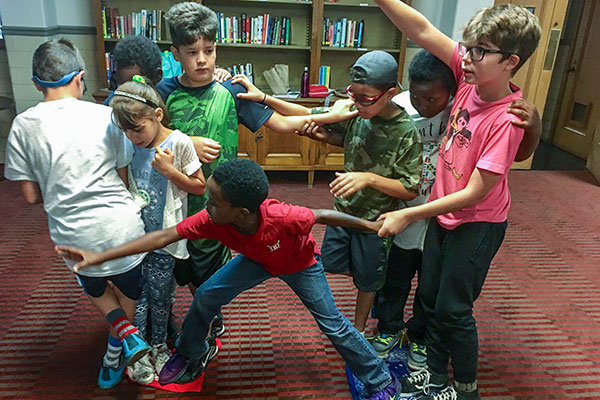 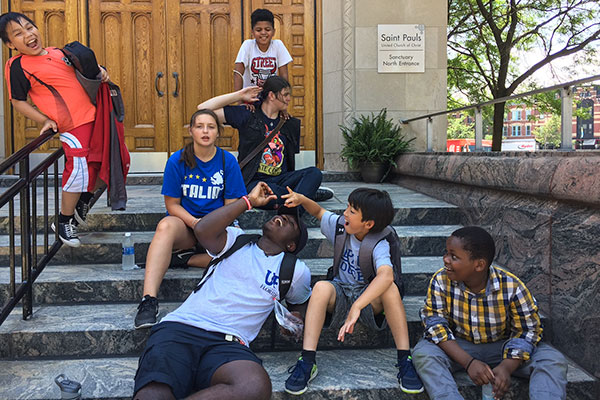 There's "a beautiful thing" unfolding at Saint Pauls United Church of Christ Chicago this month. Something that embodies two of UCC's Three Great Loves — love of neighbor and love of children.  It's a summer camp resembling a 'mini-United Nations'— one that is fostering relationships between children from across the city and from around the world.

"I noticed several years ago, that Lincoln Park had several families with young children in our neighborhood," said the Rev. Sarah Garcia, associate pastor. "People who decided they wanted to live in the city instead of moving to the suburbs. I thought with so many kids, we should offer a summer camp."

So in 2015, the church opened St. Pauls Summer Camp. Drawing children from 2 to 12, the camp runs the month of July  during the week from 9 am to 3 pm, with lunch and snacks provided for those who need it. The first year the camp drew 50 children. This year there are 120.

Thirty of those children are resettled refugees from 5-12 years old.

"Before Obama left office, he increased the number of refugees who could come to the U.S.," Garcia said. "Last fall, Refugee One (a resettlement service that creates opportunities for refugees and helps them build new lives) resettled families in Chicago with over 200 children in a three-month span."

St Pauls, which helped resettle a refugee family last fall through Refugee One, was approached by the organization a few months ago about offering camp to children new to this country and to Chicago. The service just couldn't handle finding camp space for that many kids this summer, and called St Pauls for help.

"We brought the idea to the congregation — we have a summer camp, and a giant building," she continued. "Once people started hearing about the idea, they were very supportive, saying 'of course — let's go for it!'" The congregation raised the money to accommodate the additional children just a few weeks before camp started. "Donations from the church gave us the ability to respond to this last-minute need. We hired extra counselors and got a bus to bring the kids in from the different neighborhoods. So excited about the generosity of our congregation."

In addition to refugee children, who attend the camp free of charge, that generosity is also extended to kids from the South Side, who have parents working in the community around the church. They can attend camp on scholarships while their parents work day shifts at nearby restaurants and coffee shops.

And last week, a group of young people from the Rosebud Indian Reservation added to that number, following up on an invitation extended by the St. Pauls youth group on a mission trip to the Upper Brulé Sioux Nation in South Dakota in late June. Eight Lakota teenagers slept in the church social hall for a week, before heading home July 8.

"Suddenly our camp looks like the grade-school kingdom of God with kids from Lincoln Park, the west side, the Lakota nation, the Congo, Iraq, Afghanistan Burma, and Rwanda," said the Rev. Matt Fitzgerald, pastor of St. Pauls. "The children are having a blast together and we're all learning a great deal."

The camp at St. Pauls is situated in a pretty nice neighborhood, near the Lincoln Park Zoo and water parks, so the church provides a place where children can walk to the park and play outside. That's pretty significant in Chicago, which is considered one of the most violent cities in the country. Many of the areas where refugees reside see gang activity and kids have to be careful. Church camp keeps them from being cooped up all summer.

"It's been really fantastic to experience the richness in the diversity of our campers," said Garcia. "We respect all their different faith traditions and are not trying to push ours on them. We are trying to foster respect among all the campers and to encourage them to seek spiritual nourishment in their daily lives in a variety of ways."

The children play tag, capture the flag and kickball, but they also do team building experiences, that give them a chance to get to know each other, learn about each other.

"I like meeting people from around the world," said 7-year old Sophia Sanchez, who is from the west side of Chicago. "One of the girls in my team is from Rwanda, and when we visited the zoo she told me all about the animals she remembered from Rwanda. I've never met anybody from so far away before."

"I like new friends," said Win Naign Oo, a five-year-old boy from Burma. "I love to sing 'Go Bananas' song!"

"It's cool to have fun here and not be serious," said 11-year old Ibrahim Abed, who's originally from Iraq. "I like to play tag all around the church."

"So often we live our lives as if we are separate, as if we can do our own thing and it won't affect anyone else," Garcia said. "That is not true. Our lives are connected and intertwined. There is such beauty in these connections. When we start to appreciate that we live differently, with more love and compassion. When you see our camp you may just think kids are playing tag but meaningful relationships are being made in the midst of the silliness."

And that interconnection has a spiritual side too.

"In the mainline Protestant tradition it seems like evangelism is still a bit of a taboo subject. We are more familiar with apologizing for the Christian faith than proclaiming it, but summer camp is one of the ways we evangelize," Garcia said. "We invite kids and families in to have fun and feel safe and cared about here during the week, and when they are comfortable and trust us we invite them to come on Sunday morning. The great thing is that it works. We have had people join the church after first coming for summer camp."