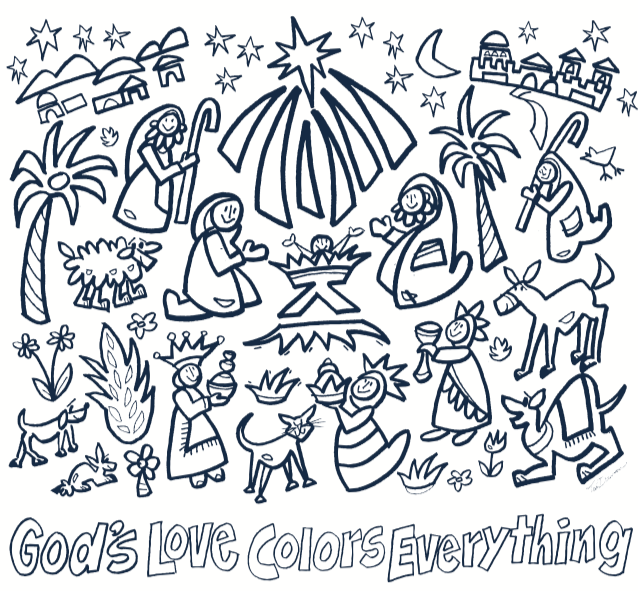 During the season of Advent, the Pension Boards-United Church of Christ's Christmas Fund is inviting the wider church to envision the colors of this season as beyond red and green.

The Christmas Fund for the Veterans of the Cross and Emergency Fund, in existence since 1902, offers congregations and members an opportunity to reach out compassionately and provide assistance to those who have faithfully served the church and find themselves facing unexpected financial needs. This year, a new twist helps support the offering through the development a Nativity Coloring Book (available through UCC Resources) that shares the story with children of how God's love colors everything.

"In the spirit of love, we invite and encourage everyone to prayerfully consider and support this year's appeal, and to spread the word so that others will also join in this vital ministry," said Brian R. Bodager, president and CEO of The Pension Boards–United Church of Christ. "On behalf of the hundreds of clergy and lay employees, and their families whose lives were touched by the support of last year's Christmas Fund Offering, we offer our sincere thanks for the generosity and for the love that colors everything in God's name!"

The coloring book has proven pretty popular. Nearly 2,000 have been purchased since it went on sale Nov. 2, with the first 500 selling out within 12 days. Illustrations for the book were created by designer Ted Dawson, a UCC member from New York City. The story, adapted by Illinois pastor the Rev. Jeanne Murawski, recounts the nativity, from Mary's miracle conception, to Jesus' birth in a Bethlehem manger, to shepherds and wise travelers visiting the newborn Christ.

The Christmas Fund, one of the UCC's four special mission offerings, enables the Pension Boards to provide pension supplements, health premium subsidies, emergency assistance to active or retired clergy families, and Christmas gift checks to hundreds of retirees and to those who are disabled. Behind a 2016 theme of "God's Love Colors Everything," the ministry has a goal to raise $1.7 million to help support these ministries of love and care, seeking to surpass the 2015 total of $1.52 million in contributions to the offering.

The fund has helped pastors such as the Rev. James W. Whitley, who had served UCC congregations for 34 years. In 2011 he was diagnosed with Parkinson's disease. He battled Parkinson's for five more years while continuing his ministry before eventually retiring on disability in April 2016.

Whitley and his wife, Cathy, completed the process of applying for disability benefits and were initially determined to be eligible, but their eligibility was later revoked. With the help of Pension Boards staff, the benefits were reinstated. When a gap in resources to pay insurance premiums for a three-month period threatened the couples' livelihood, Whitley eventually received an emergency grant from the Christmas Fund to pay the premium.

"Those words made our day, our month, our year, our life!" he said.

"After 39 years of faithful service to the United Church of Christ and keeping my part of the covenantal relationship, my beloved denomination came through for me in a crisis situation," Whitley said. "Each church that I have served has been diligent in answering the call of the Pension Boards to give to the Christmas Fund. On several occasions, I have asked for assistance for other ministers. Little did I know that I would find myself in need of assistance through the Christmas Fund."

Ordained in 1961, the Rev. Joe Runner served three churches in South Dakota before pastoring a congregation in Rhode Island. Runner faithfully supports the Christmas Fund, having seen firsthand the kinds of needs those funds can fill.

Runner recognizes the circumstances of many local congregations, particularly smaller ones that may not have the resources to contribute adequately to a retirement plan for their minister.

"Pastors are often given the option to allocate their salary package, but, torn between providing for retirement and meeting current expenses, they often have to choose the need of the present moment," Runner said. "Gift checks sent to a retiree are a way of saying ‘thank you' that he or she may not be hearing anymore, communicating they have not been forgotten."

During Advent, the Pension Boards is asking congregations and people to color their posters and post pictures on social media with the following hashtags: #coloringgodslove #uccchristmasfund #pbucc #ucbma #uccchristmas #ucccolors