Christian leaders stand with refugees, call for substantial increase in U.S. admissions in 2019 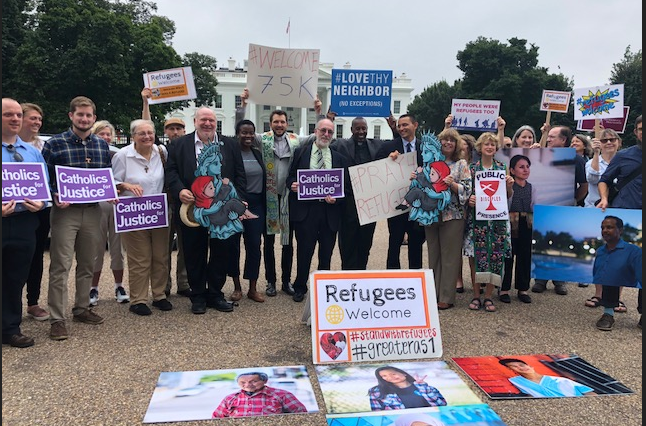 Denominational leaders from several Christian faith traditions joined together to speak out and to pray for refugee resettlement on Wednesday as the Trump administration prepares to set the number of refugees which will be accepted by the United States next year.

"I am deeply concerned by reports that the Administration is considering reducing the refugee admissions goal to 25,000 or lower in 2019," said the Rev. Dr. John C. Dorhauer, general minister and president of the United Church of Christ. "I urge the Administration to set a refugee admissions goal of at least 75,000 in the next fiscal year, and to meet that goal. The United Church of Christ consistently has joined other religious leaders and organizations in public opposition to cutting refugee numbers and is a proud leader in the campaign to #Pray4Refugees and #Welcome75K."

After setting the lowest refugee admissions goal in history last year - 45,000 - and admitting less than half of that low number, the Trump administration is reportedly planning to set an even lower bar next year; to admit only 25,000 refugees or even fewer in Fiscal Year 2019. Faith leaders, refugee leaders, business and community partners, outraged by the administration's continued slashing of the refugee program, are asking to raise this number and welcome 75,000 refugees in 2019.

A group of Christian clergy, representing some of the largest Protestant denominations in the country, gathered outside the White House on September 12 to underscore their message of welcome. The Rev. Sharon Stanley-Rea, director of Refugee & Immigration Ministries, the Christian Church (Disciples of Christ), was one of them.

"When the U.S. helps lead the world in welcoming refugees, we maintain our nation as a beacon of hope and opportunity, respond to scripture's repeated call to welcome the sojourner and vulnerable, and honor our decades-long heritage of hospitality," she said. "We also pray to welcome 75,000 refugees because we have the means to help meet the deep needs of the world, and because doing so helps us communicate through our universal language of love."

"We call upon all policymakers to work for just and compassionate migration policies that affirm the worth, dignity, and inherent value and rights of all persons regardless of nationality or legal status," said the Rev. Susan Henry-Crowe, general secretary, General Board of Church and Society, The United Methodist Church. "Cutting the refugee admissions numbers down to a historic low does not do that. As followers of Jesus, we reject in the strongest terms efforts to halt refugee resettlement or deny welcome to those facing forced migration. We call on our political leaders and policymakers to ensure the United States welcomes and resettles at least 75,000 refugees each year."

"As people of faith we understand that when the state won't speak, when the nation won't speak, that we will raise our voices to speak louder to say we stand with refugees from wherever they might come," said the Rev. Jimmie Hawkins, director of the Office of Public Witness for the Presbyterian Church (USA). "There is place in this country and our churches and in our homes for all people who have such a need."

As Dorhauer said, "We must reject the notion that our nation cannot be a home to our neighbors and do all that we can to provide shelter and safety to welcome refugees."