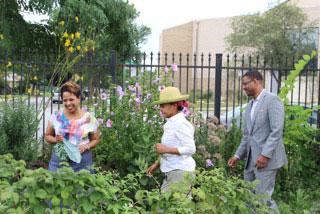 A mile and a half from Trinity United Church of Christ, along 95th Street in Chicago, is the recently dedicated site of the church's Imani Village.

In the heart of the South Side, close by an expressway and the El tracks, Imani Village is a 27-acre project that will include a five-acre farm providing training for green jobs for people who have been released from prison. Plans also call for residential housing for seniors, athletics space for youth, and a primary care clinic focusing on preventative care offered through a partnership with a local hospital system.

Trinity UCC's emphasis on environmental concerns is not secondary in its ministry—it flows from a green theology that shapes everything the congregation does.

"When we speak of environmental justice in the global economy, we're talking about communities of color who will be adversely affected by climate change," said senior pastor Otis Moss III. Additionally, "Africa, South America, and Asia have been utilized as a garden by European colonialism for over a century. Ecojustice is a way for everyone on the planet to recognize our common connection to the earth and our common connection to each other."

Moss describes the approach as theological biomimicry—looking to the earth as an example of how to build relationships that are not oppressive.

"When we recognize the interdependence and interconnection in nature, we begin to build human systems that are independent and interconnected, based on justice and love," he said. "Nature recognizes that everyone has a purpose in the larger sacred economy. Capitalism doesn't have that lens."

This vision fuels their efforts to not only care for the earth, but to employ the marginalized and develop a just economic base for the community.

"It takes longer this way," Moss said of the ministry, since it involves educating the congregation on why the cheapest building options aren't always the best ones, as well as finding hyperlocal, black contractors who are able to connect with the vision.

The approach builds on Trinity's legacy as a congregation that is "unashamedly black and unapologetically Christian." Its longtime pastor Jeremiah Wright Jr., now pastor emeritus, was known for his prophetic preaching. Barack and Michelle Obama and their daughters attended Trinity when they lived in Chicago.

Trinity's emphasis on green ministry began in earnest six years ago when it decided to renovate its building. Renovations are underway to make it certified in Leadership in Energy and Environmental Design by the U.S. Green Building Council.

Work is currently being completed on a green roof for the two-decades-old building—one that collects and cleans rainwater, among other benefits. Rosalyn Priester, a Trinity deacon and longtime member, was part of the multiyear $5 million fundraising campaign for the project. The congregation did a listening tour to share the idea with the community and for a year someone at each service spoke about why they gave.

"What is so marvelous about what's happening at Trinity is that it's not something that's abstract, it's real in our everyday lives," she said. "It's not something on the agenda to preach about a couple of times a year."

Read the rest of the article at the Christian Century website.