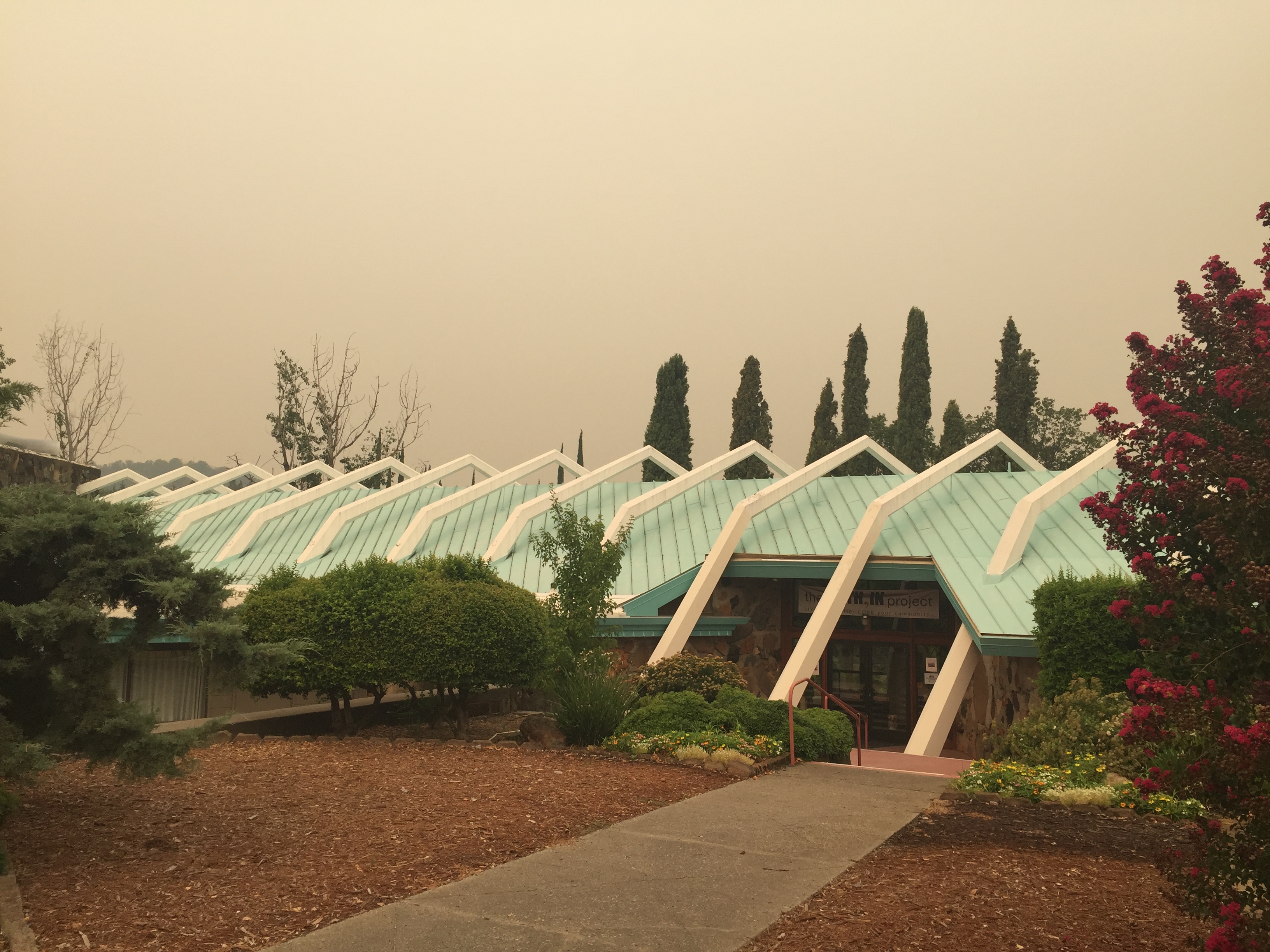 A UCC congregation in Redding, Calif., is planning a community meal on Tuesday, August 7, for friends and neighbors who have lost their homes and possessions to the wildfires burning in the area. While flames came within a mile of Pilgrim Congregational United Church of Christ, the church building, designed by famed architect Frank Lloyd Wright, was spared. The church family was not.

Elizabeth Cifu Shuster, who manages the office and the facilities at Pilgrim Congregational Church, said four members of the congregation have lost their homes entirely, and many are still under mandatory evacuation.

"The church was under mandatory evacuation for a time, and our congregation really stepped up to take care of the building and the church body," she said. "The fire came within a quarter to a half-mile of the church; two neighboring subdivisions were on fire at one point. Several members immediately began calling around to find out who had been evacuated and that everyone was safe."

Pilgrim Congregational is between pastors right now, so everyone is pitching in to share information and to provide care for others in their community.

Elizabeth and her husband Tyler, who also works for the church, started a congregation-wide email thread to get everyone in on the same conversation. "In this way, we were able to learn about most of the people who lost their homes," Elizabeth said. "I cannot guarantee that there are only four at this time, because many people are still evacuated and out of town, so they don't know the status of their home yet. It's too soon to give a final number."

The blaze that ravaged Redding and the surrounding area, the Carr Fire, is one of the largest of more than a dozen fires raging across Northern California. Six people, including two firefighters, have died. The fire has destroyed 112,888 acres in the past week, along with 1,060 homes and nearly 500 other buildings, including barns and warehouses, making it the sixth most destructive wildfire in California history, according to state fire officials. It was just 30% contained as of Wednesday morning. 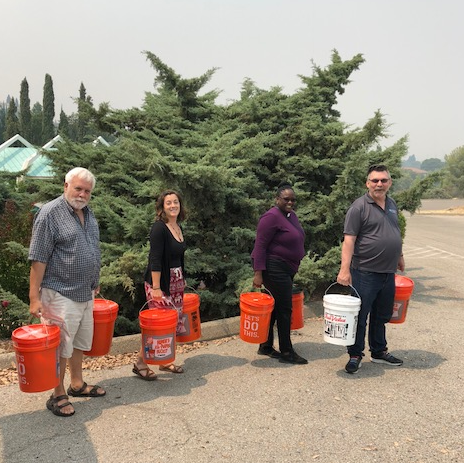 On Thursday, August 2, representatives of Northern California Nevada Conference and UCC Disaster Ministries went to meet with the Cifu Shusters, to take them supplies to help start the cleanup process.

"It was deeply moving to join Associate Conference Minister Davena Jones and Revs. Bob Shore-Goss and Joe Shore-Goss in delivering 10 disaster clean-up buckets the Northern California-Nevada Conference made last month at our Annual Gathering to Pilgrim Congregational UCC," said Amanda Sheldon, program associate, UCC Disaster and Refugee Ministries. "When we made these buckets at annual gathering, we decided we wanted to keep them in our conference for when the next disaster came, but we had no idea that would be only one and a half months later!"

"As I drove from Fairfield to Redding, I watched the sky change from a clear blue, to a foggy, smoky, haze. I saw once grassy areas now charred for miles," Jones said. "Once I arrived to Pilgrim Congregational Church I immediately noticed the ash on the ground, the steps, in the plants. The air was so bad that a mask should have been worn, especially for someone like me who has asthma. So I can't help but feel a deep concern for those with respiratory problems."

"I know for a fact that the Pilgrim family is very grateful for your love, prayers, calls and support thus far," she continued. "As they discern in the next couple of weeks the type of support they will need moving forward please contact me, Pastor Davena Jones, Associate Conference Minister with your questions and ways to support this Congregation and Community. Pilgrim is currently in transition and without a pastor, so for now, our Conference office will be their Pastor and contact."

Jones said Pilgrim Congregational Church is the only church in the Conference with members who have reported loss of their homes. There were, however, other UCC congregations and affiliates threatened by the fire. Two other UCC churches and three Retirement Housing Foundation (RHF) facilities are in the Redding fire area.

"Alturas-Federated Community UCC (in Alturas) and Cedarville-Surprise Valley Community UCC (in Cedarville) are taking in a lot of smoke," Jones said. "Pastor Ben Zandstra has encouraged members of the churches (he is Pastor to both congregations) to pack important items, medications, and photos case a fire starts. Pastor Ben stated that the air is really bad, causing issues for those with respiratory problems."

Two of the RHF homes were evacuated for a few days because of approaching flames, but as of last week, the residents of RHF Housing: Butte Home and Cottonwood Home are back in community, safe and accounted for. The people of Redding Pilgrim House still have bags packed in case they need to evacuate quickly, though the fires are not currently posing an immediate threat to that community.

But the fire season in California is just beginning. And UCC Disaster Ministries is standing by to assist churches through gifts to the Emergency USA Fund. Disaster Ministries has already provided a solidarity grant, partnering with the Conference to fund Pilgrim Congregational Church’s community dinner August 7.

On Sunday, August 5, Northern California-Nevada Conference Minister the Rev. Diane Weible joined Pilgrim members in worship. She said their former Pastor, the Rev. Ann Lougee, came back to preach for them. "She did a wonderful healing circle for the four families that lost their homes and for the families that were evacuated," she said.

"This fire took so many people's homes," Elizabeth said. "It also took from us six lives, most of a national park, a gem of a river trail, countless hiking trails, housing opportunities, and friends who are deciding not to rebuild and are leaving the area. We had a budding tourist economy here, and at least for the foreseeable future, that has been brought to a halt. It's impossible to name all of the loss we have encountered as a community. We will be grieving for some time."

Support the work of the Emergency USA Fund here.