Building bridges of trust and understanding with ECOT brothers and sisters

The United Church of Christ national officers gathered via video conference Monday afternoon, Oct. 3, with seven representatives of ECOT (Evangelical, Conservative, Orthodox, and Traditional) congregations from across the life of the church.

The agenda for the meeting didn’t call for any votes or seek to produce any statements. This was simply an opportunity to open up what has often been difficult dialogue between conflicted parties and to build relationships of trust and mutual respect.

UCC General Minister and President the Rev. John C. Dorhauer and Faithful and Welcoming President Bob Thompson have spent a good deal of time over the last year in deep conversation with each other. Their shared commitment to broaden the tables of welcome and conversation have built a bridge to deeper understanding of the critical role that ECOTs play in the ongoing life of this denomination.

"Holding space open for these conversations helps the United Church of Christ live fully into its commitment to be one," said Dorhauer. "I am personally enriched by the dialogue, and spiritually uplifted by the grace with which it is conducted." 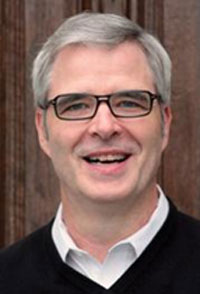 As the conversation wound to a close, Bob Thompson said, "That the full Collegium was present for this meeting means a lot to us. It is an important symbol that you are committed to foster trust and mutual respect. We are very grateful."

In a denomination whose General Synod delegates have consistently taken positions that place this church squarely in the heart of an unashamedly progressive and radically inclusive Christian orientation, the leadership of the ECOT congregations expressed the sentiments of members who often feel alienated and unheard. The denomination’s commitment to a wide table of welcome requires that it works to eradicate any feelings of marginalization in any of our churches and participate in difficult conversations necessary to advance unity of purpose in spite of diversity of thought.

That theme resonated throughout the conversation Monday. UCC national officers the Rev. John C. Dorhauer, general minister and president, the Rev. Traci Blackmon, acting executive minister of Justice and Witness Ministries, and the Rev. Jim Moos, executive minister for Wider Church Ministries heard the voices of discontent – but also heard a genuine desire to be in deep relationship and covenant with the wider church. Stories of not being well and deeply heard; of being booed when speaking from the heart about their own faith perspectives at denominational gatherings; and of feeling left out of key positions of leadership and authority in the life of the UCC were shared.

Dorhauer, Blackmon and Moos made commitments to deepen and continue the dialogue. They share the desire of ECOT leaders to be sure that the voices of all are valued at every level of the denomination.

Speaking for his colleagues, Moos said, "The United Church of Christ is a diverse community of faith with a calling of unity, no voice should go unheard."

Representatives from ECOT Churches in attendance:
Alonzo Keith Edwards, an African American Pastor of Pilgrim Congregation UCC in Houston, Texas. He has been at Pilgrim for the last 12 years. His background is in ministry for 34 years. Pilgrim is an African American Church that is 112 years old.

Bob Thompson, a white pastor in Hickory, North Carolina. He has served Corinth Reformed Church (UCC) since 1993 and is President of the Board of Directors of Faithful & Welcoming Churches. He has been in the UCC for almost 40 years and currently serves as Secretary of the Southern Conference Board of Directors.

Curt Kekuna, a brown pastor (Hawaiian/Chinese) in Hawaii. He served with Young Life for 30 years and at Kawaiaha’o Congregational Church since September 2004. While I've had brief departures, I have attended a Congregational church since 1952! I have 4 children 39, 37, 35 and 33 and one wife.

Jeffrey Willey, a white pastor completing his second year at Christ United Church in Cypress (outside Houston), Texas. Ordained in 1991, Willey is the current Chair of the Houston Association's Committee on Ministry. While Christ United is neither ONA nor FWC, we are committed to the foundational principles of the UCC.

Kathy Wenger, a white lay person from rural Lancaster County, PA. She has been a member of St. John's Center UCC (a Faithful & Welcoming congregation) for 25 years. Currently she serves on the Search Team at St. John's as they have been without a permanent pastor for almost two years.

Rosa Williams, a retired African American UCC minister in Erwin, NC. She most recently served Plymouth Congregational UCC in Beaumont, TX. She has been in the UCC for 27 years.