Brooklyn church takes a knee to call out racial injustice 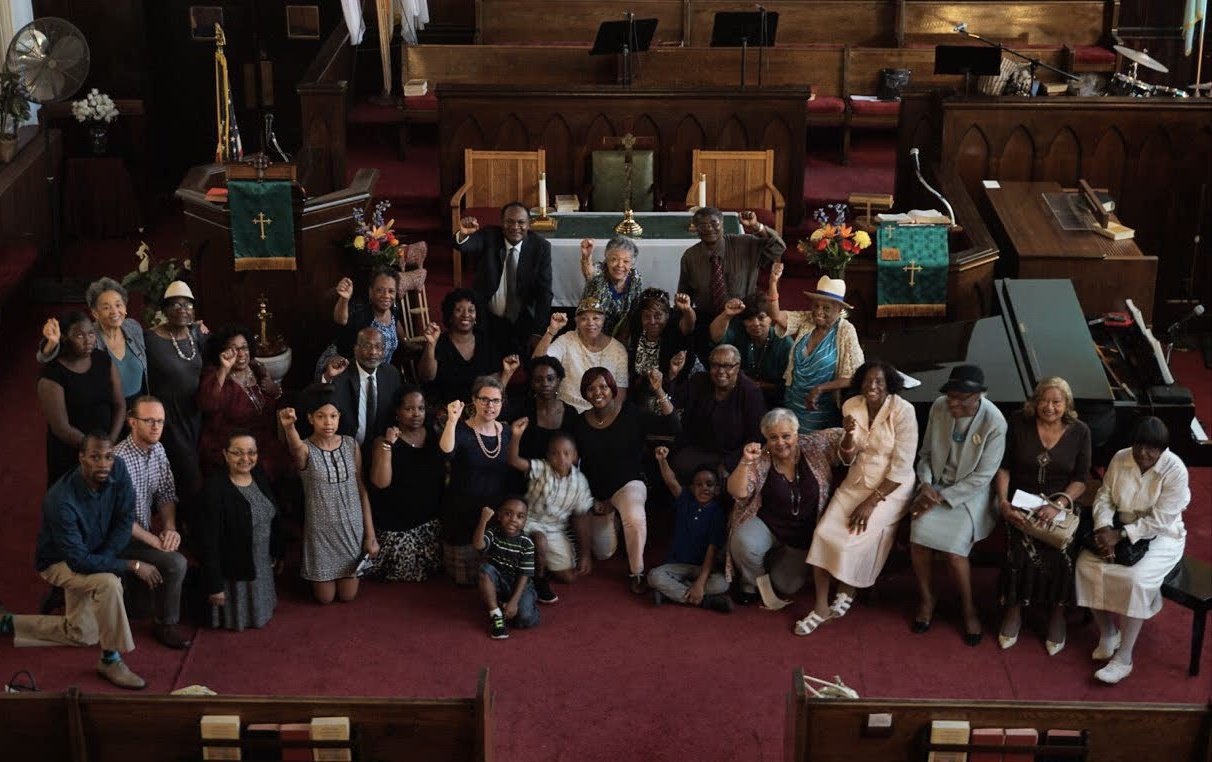 The continuing debate about professional athletes protesting social inequality on the field of play remains in the American spotlight, and this week a Brooklyn congregation of the United Church of Christ is taking a stand — or a knee, rather — in support of those athletes and team owners publicly calling attention to racial injustice.

Congregants at Nazarene Congregational UCC in New York City "took a knee" on Sunday, Sept. 24, answering a call to demonstrate their love of neighbor by kneeling after their worship service. They posted their photo to Twitter before NFL games kicked off that afternoon.

"In solidarity with the victims and families of racial injustice, and athletes such as Colin Kaepernick 'taking a knee' during the national anthem to raise attention to said racial injustice, members of the congregation took a knee today," said Greg Halzen, a deacon at the church.

About 30 church members, from young children to the elders, knelt or were seated for the photo, and many of them raised a fist. The group was inspired to this action partly by the Resistance Revival, a choral group of 60 women, which sings protest songs about resistance.

Nazarene Congregational, established in 1873, is a diverse and multicultural congregation in the neighborhood of Bed-Stuy, and has relied on member leaders in the absence of a pastor for the last year-and-a-half.

"We are very concerned about social justice," said minister Sonya Horton. "We are very sensitive to the needs of the community — therefore, whenever there is an opportunity for us to stand with oppressed and marginalized people, we gladly do so."

Deacon George Green said, "The church has a longstanding tradition in speaking out and offering our support anyway we can, especially after President Trump's comments. Freedom of speech is still our constitutional right. People have march and died in order to be heard."

Protests during the national anthem were the norm on Sunday, with about 200 NFL players throughout the country kneeling, sitting or raising their fists, or locking arms in in response to the remarks made a two days earlier by President Trump. He criticized players who participated in such protests, said it was "unpatriotic" and that owners should fire those athletes. In one of Sunday's first games, Jacksonville Jaguars owner Shad Kahn, among a handful of franchise owners who donated at least $1 million to Trump's campaign, locked arms with his players during the pregame ceremonies. Several other owners and team coaches also spoke out against Trump's comments, with most responses labeling his remarks as "divisive."

Former San Francisco 49ers quarterback Colin Kaepernick started the movement last season, taking a knee during the national anthem of the team's games to call attention to police brutality against people of color. Kaepernick, now a free agent, has not been picked up this year.

As the congregation wrote on its Twitter post, "The commandment to 'love your neighbor' calls us to seek racial justice."