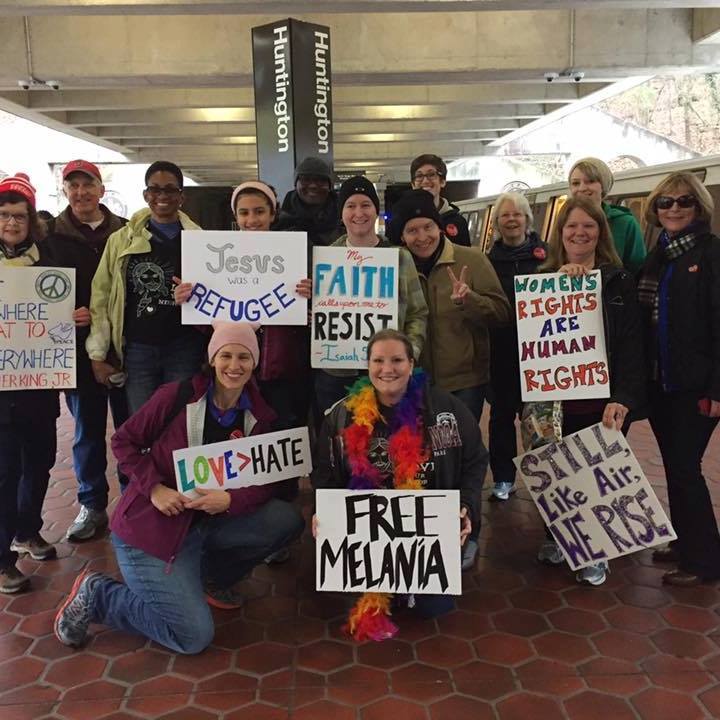 Stranded on the side of Interstate 70 at a rest stop in Maryland, in a broken-down bus, 70 miles away from their destination, a group of United Church of Christ members and their pastor from Kansas waited. And they waited for five hours into the night for a repair truck that never came.

They were rescued instead, by about a dozen members of Hope UCC in Alexandria. Va., Congregants, set to host the 66 members from Plymouth Congregational UCC in Lawrence, Kan., got into their cars and drove north to meet their stranded visitors and picked them up. Less than 12 hours later, both churches were part of the crowd of 500,000 people at the Women's March on Washington, D.C., on Jan. 21 as part of the UCC's call for a just world for all.

The Rev. Eleanor McCormick, pastor of Plymouth Congregational, said it was "hard to find the words to express gratitude to Amber's congregation. It wasn't the story of one Good Samaritan. This was dozens of people stepping up as Samaritans."

The Rev. Amber Neuroth, Hope UCC pastor, said she and her congregation felt terrible for the Kansas travelers after a 20-plus hour bus ride, and then a 5-hour delay. The two churches had planned to gather and get to know each other the day before the march during a sign-making party, a dinner and ecumenical worship service with a local Episcopal church. Hope UCC was one of the area churches hosting visiting UCC congregations for the march.

"We had prepared to be a blessing in a particular way — to welcome them and have everyone share in a meal together as we prepared for the march," Neuroth said. "And we had to let go of all that preparation and be a blessing in a different way. It felt like if we didn't get them that they would have missed the march."

Neuroth and McCormick had kept in contact during Plymouth's ride from Kansas to Virginia, and Hope UCC was ready to welcome them Friday afternoon. But suddenly the Kansas contingent ran into some traffic, pushing their arrival back a few hours.

Things got worse when the bus broke down in Maryland at the South Mountain Welcome Center, about 90 minutes away from Alexandria. As members of Plymouth waited for a few hours to see if a repair truck would arrive to get the bus started again, it became apparent to them and their hosts at Hope UCC there was no way to fix it. So members from Hope UCC leapt into action.

"My folks decided to pack up all the food and they were off. They went and picked them up," Neuroth said. "I think people from our church and theirs connected in their cars and had more of an intimate connection. We got them to their homes, and the next morning, everyone showed up and rode the Metro to the march."

"I think Amber's church embodied what we mean by extravagant hospitality in the UCC," McCormick said. "Without hesitation, they prepared teams of people and dozens of cars to come and pick us up. They drove late at night, through dense fog, three hours round trip — even after waiting for us through dinner." 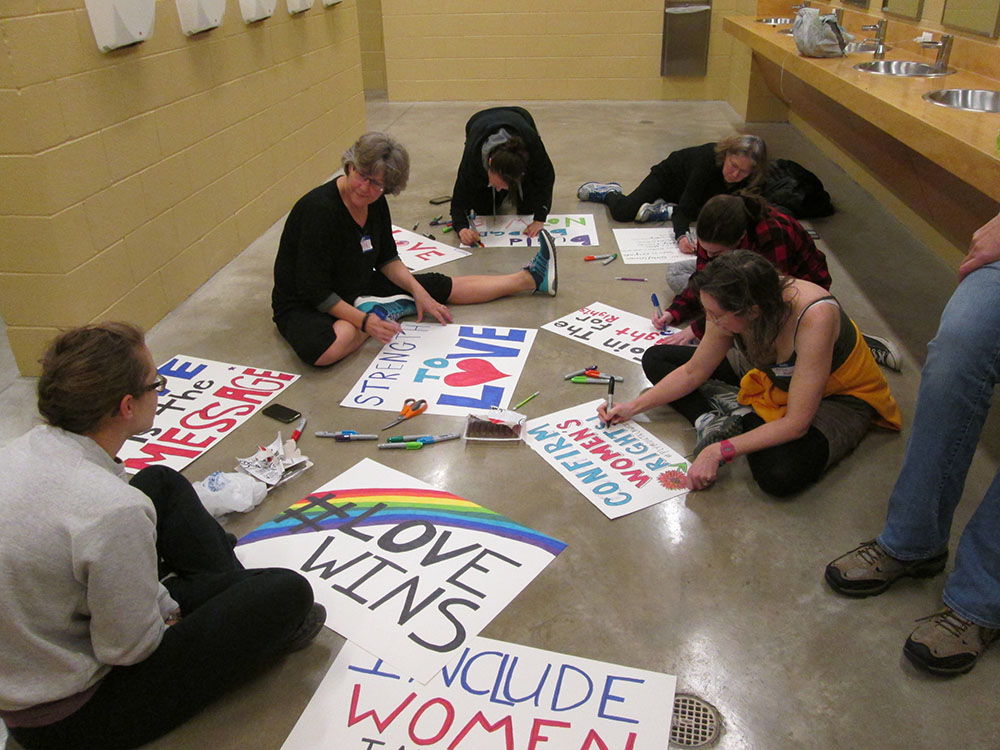 Making the best of their time, the Kansas contingent made their protest signs on the floor of the rest-stop bathroom, stretched their legs, and ordered about 12 pizzas delivered to the rest area. They spent the evening talking with each other about why each of them was marching. McCormick explained that Margaret Kramar, who helped her plan the trip, was the first congregant to approach her about participating. "She came up after a Sunday service and said, 'We must take a bus to D.C., and I will do whatever it takes to see the United Church of Christ and a bus from Plymouth represented there,'" she said.

As for the march itself, both pastors said it was an incredible and overwhelming feeling to see a half-million people united for equal rights and justice.

"For those that I talked to, it was one of the most gratifying experiences they have had," McCormick said. "Most of my bus said this was a once in a lifetime experience and that it would be one of their best held memories. They truly felt like they were putting their faith in action." 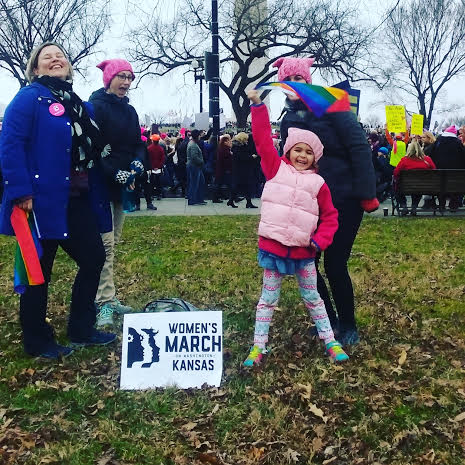 "There's been so much genuine interest and true energy," McCormick said. "One of my favorite signs was from a 6-year-old, Maggie, on our bus that read 'Kansas,' and people at the march told her it was wonderful she came all the way from Kansas. She was just beaming telling those on the bus that story. Her mom, Heather Moise, attended two marches in D.C. with her own mother, and she wanted to give those experiences of faithful and direction action to her daughter, who wanted to go.”

“For me and my church, there was a sense of previously feeling isolated in being worried or anxious about the coming years, but the march eliminated the feeling of hopelessness," Neuroth said. "There was a lot of energy and engagement. The goal now is to keep that energy going forward, and to make sure we are faithful as a church to every marginalized person or group."

After the march concluded, members of Plymouth Congregational boarded another bus for their drive home, leaving at 6:30 p.m. Saturday and arriving home 22 hours later late Sunday afternoon. They've already planned how they can use the energy of the D.C. event in the coming weeks.

"There was so much energy after that march to look at what was next," McCormick said. "Our bus members will meet this Sunday with marchers from the Topeka and Kansas City marches to share photos and stories, and develop a resistance plan for the weeks ahead."