Resolving to be bold in 2016, UCC leadership plans to amplify public witness of core mission

The United Church of Christ national leadership, in partnership with several UCC conferences, will be amplifying the denomination's bold public voice in 2016 around a dozen issues central to the church's core mission. 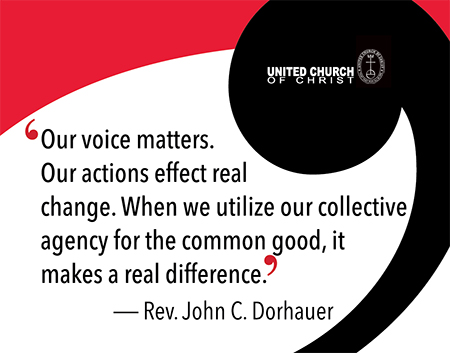 Part of one of General Minister and President John C. Dorhauer's initiatives, UCC mission teams will brainstorm around issues of race, refugees, immigration, climate change, voting rights, mass incarceration, the marginalization of women, and ecumenical solidarity to develop creative ways of sharing/communicating the UCC witness with the wider church and the secular world through social media and media events.

"Climate change is the greatest moral challenge humanity has ever faced," said the Rev. Jim Antal, conference minister and president of the UCC Massachusetts Conference. "The changes we must make require moral leadership — and it's unimaginable that we can make those changes without churches, synagogues and mosques leading the way. In the years ahead, the relevance of church will be measured by our capacity to engage a handful of issues. Climate change must be on that list."

"The United Church of Christ has been a difference maker from the start," said the Rev. John Dorhauer. "We were central to the abolitionist movement, to the suffragist movement, the civil rights movement. We championed women's ordination rights, and LGBT ordination rights. We helped move an entire country to become a marriage equality nation — all 50 states in the country now doing same sex marriages. Our voice matters. Our actions effect real change. When we utilize our collective agency for the common good, it makes a real difference."

To make a difference in 2016, the UCC national offices are partnering with seven conferences and their local churches around a dozen relevant topics, and taking a public stand on controversial and relevant topics like earth care, white privilege, the welcome of refugees, and the conflict in Israel-Palestine. Look for the messages to appear monthly.

"We're ready for it! Our churches have been hungering for the kind of vision contained in the initiatives Rev. Dorhauer has laid out," said the Rev. Mike Denton, conference minister, UCC Pacific Northwest Conference. "These particular 'bold public voice' goals are a welcome opportunity to speak prophetically and feel the connection with our kindred throughout the whole United Church of Christ."

Each of seven conferences — Central Atlantic, Connecticut, Massachusetts, Minnesota, Iowa, Pacific Northwest and the Southwest — will be partnering with the national ministries' teams around one issue that resonates with their congregations, and creating a message to share with the world. 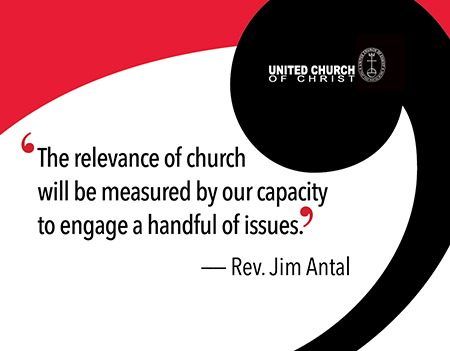 "For 10 years, climate justice has been a principle focus of the Massachusetts Conference," said Antal. "The national setting has long focused on environmental racism and other related issues, but in the run-up to the vote by Synod [in 2013] to divest from fossil fuel companies, the collegium issued a statement, 'We believe that God is calling the United Church of Christ to become the leading religious voice on climate change and environmental racism …' Partnering with the national setting to amplify the UCC's bold public voice is an extension of these commitments."

"We are very agricultural here in Iowa and matters of the environment — whether it's climate change or water quality, or the pros and cons of genetic engineering — are very important to us," said the Rev. Rich Pleva, conference minister of the UCC Iowa conference, "and I'd like to see the UCC be a leading voice in ensuring that progressive faith values are included in the conversations around these important and difficult issues."

"Here in Connecticut we are mindful of the historic legacy to be a church in the 'public square,'" said the Rev. Kent Siladi, conference minister of the UCC Connecticut Conference. "Members of our congregations have often mobilized around justice issues and it is a part of our DNA to encourage members of our churches to make an impact in their communities, in our state, our nation and the world." It is expected that racism and white privilege will be a topic of focus in that conference.

"We're excited to be partnering with the Muslim community here to strengthen our interreligious relationships and give an alternative to some of the polarizing rhetoric," said Denton. "We're still figuring out some of the details but are excited about the possibilities [coming from the Pacific Northwest]. We'll be sharing more soon!"

"Critical to the success of this initiative will be the partnerships with the wider church," said Dorhauer. "Youth and young adult leaders, as well as key leaders from a wide variety of conference settings, are partnering with us to plan, execute, and undertake these 12 media events. They will be held in settings across the breadth and depth of this denomination. They will involve many voices and utilize media from a wide array of options."

"In a culture dominated by ideological division, the UCC is a place where discernment is essential because we believe revelation is ongoing," said Antal. "For the UCC, having a bold public voice is not the same as having a singular public position. These and other issues — such as the concentration of wealth amongst the 1 percent — are the moral issues of our day. The UCC must model the importance of the church speaking out, while also modeling the importance of speaking with a range of voices."

"Sharpened internal identity would be a wonderful outcome," said Pleva. "Any group that knows with clarity and passion why it exists has a far greater potential for robust vibrancy than do communities that are without clarity and conviction about their own essential raison d'etre."