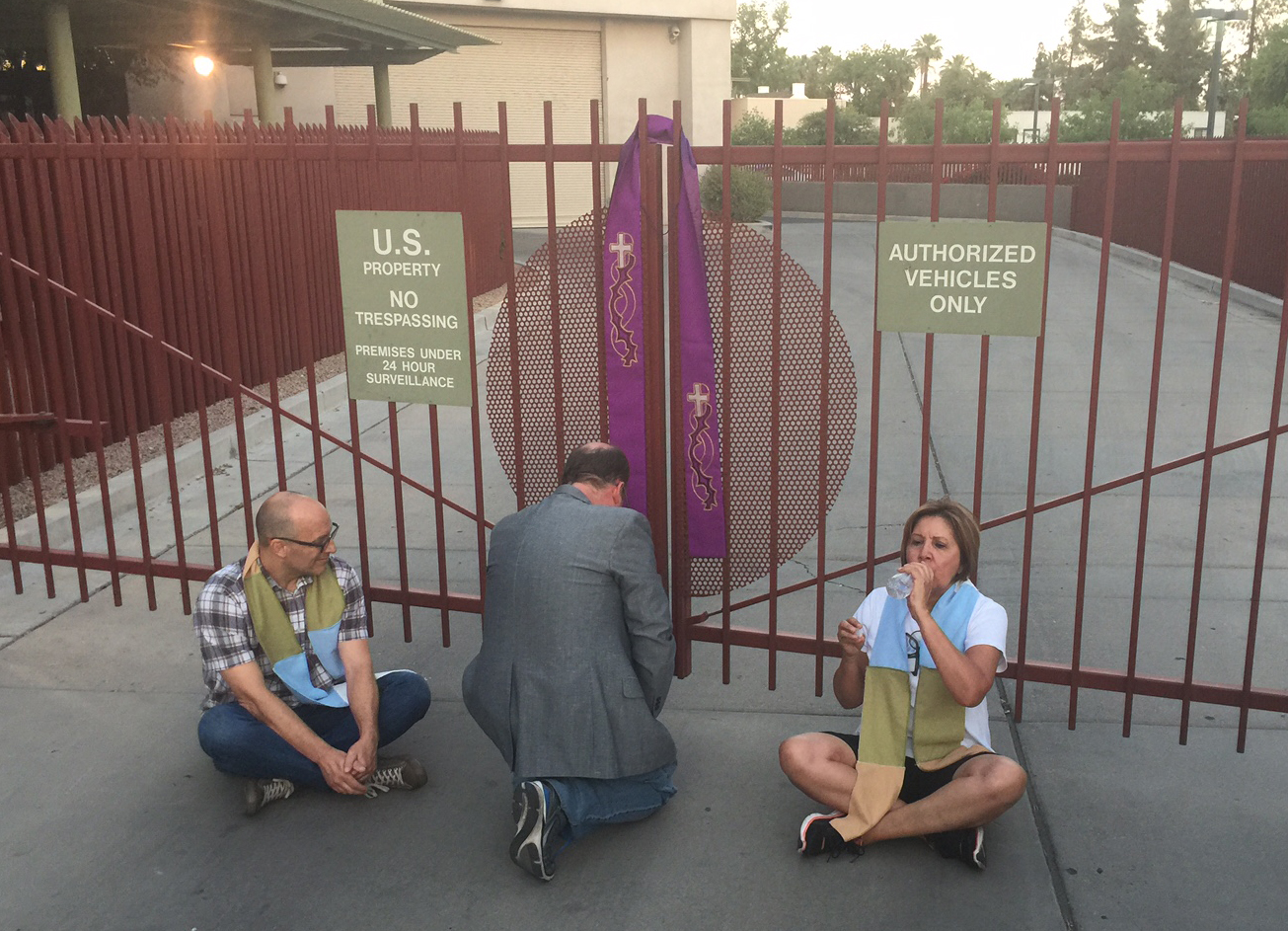 A group of United Church of Christ activists, working to build a just world for all, are standing vigil outside the Phoenix Immigration and Customs Enforcement Offices Friday morning, calling for justice for Marco Tulio Coss, a Mesa resident and Mexican immigrant who was snatched under false pretenses, arrested and deported Thursday afternoon.

"Our brother and neighbor, Marco Tulio has been deported and torn from his family," said the Rev. Ken Heintzelman, pastor of Shadow Rock UCC in Phoenix. "ICE officials lied to Marco and to his attorney."

Hosting what they are calling a 'Break the ICE' hospitality party outside the gates at the Phoenix ICE offices on May 12 are Heintzelman, Arlene Dominguez, Shadow Rock's director of sanctuary and Michael Stancliff (who all spent the night outside those gates), along with the Rev. James Pennington, pastor of First Congregational UCC, and the Rev. Bill Lyons, conference minister of the Southwest Conference UCC.

"Not only is this a call for Marco's return, but we want to expose the willingness of ICE officials to use lies to accomplish their end goal," Lyons said. "This breaking of trust is just a huge matter." They also hope to underscore the faith community's willingness to offer welcome and hospitality. 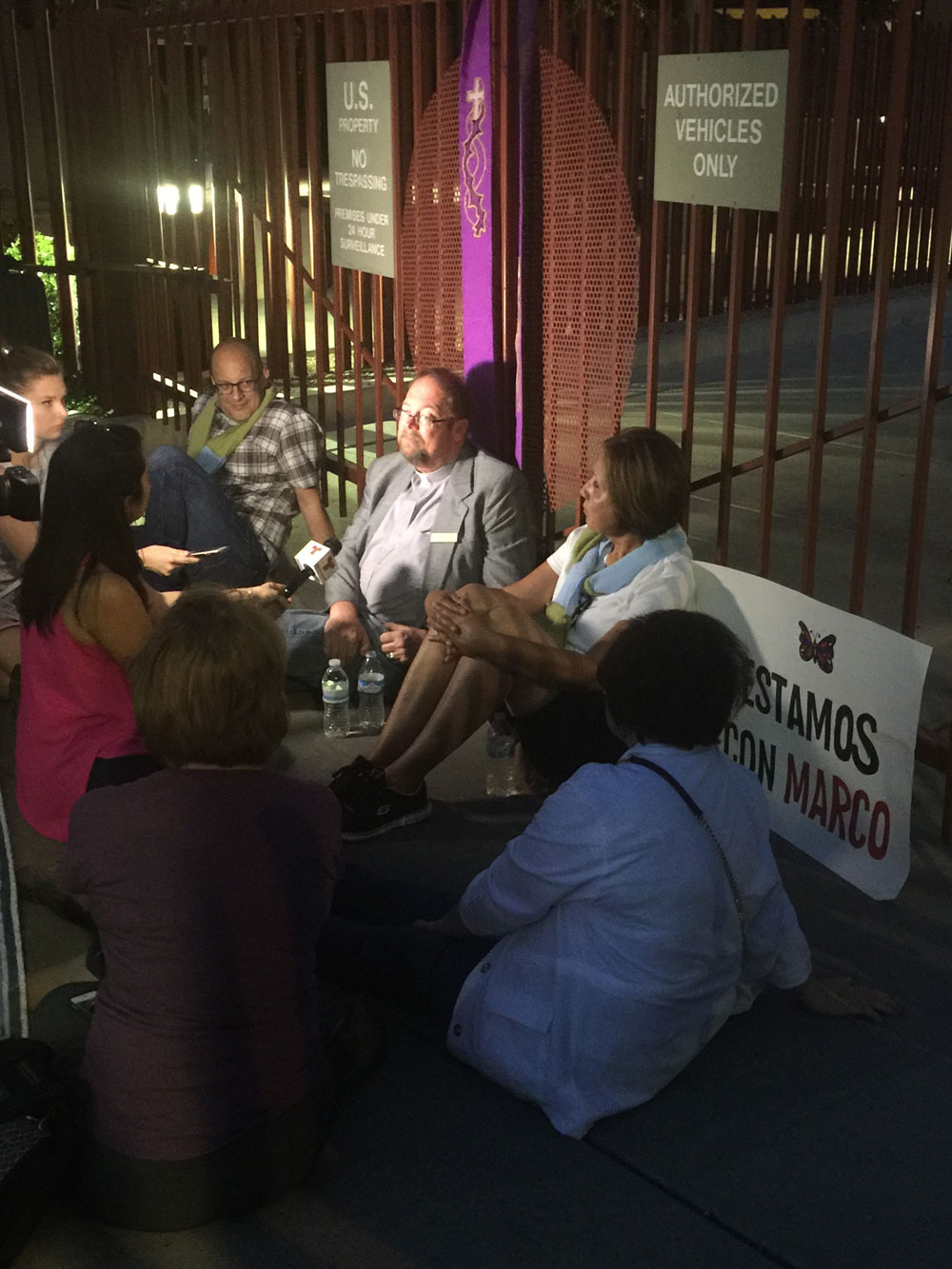 Coss, who has lived in the United States for 17 years, first came to the attention of ICE after a traffic stop in 2009. After exhausting his appeals to stay in this country, Coss was offered sanctuary at Shadow Rock in Phoenix in 2014, but an order of supervision granted by Immigration and Customs Enforcement allowed him to continue to live with his family. After years of check-ins with ICE, Tulio was recently told he was facing deportation orders once again.

This week, Lyons said Coss and his attorney, Ravindar Arora, were working in good faith to process another stay of removal. When the attorney took the paperwork to the ICE offices on Thursday morning, he was told Coss had to appear immediately. That, the UCC minister noted, was just one just one of several face-to face-interactions between the attorney and ICE on May 11 where Arora was told deportation was not imminent.

Instead, ICE officers told Arora that Coss needed to be fitted for an ankle bracelet as ICE considered the new request for a stay of removal. When Coss returned to the ICE offices for the second time that day to be fitted with the GPS device, he was arrested, detained and deported. He called his family from Mexico hours later. Arora said officers had indicated that even if the motion for a stay was denied, Coss would have 30 days to get his affairs in order and say goodbye to his family.

"Their lies led Marco and his attorney to believe that there was a path for an administrative remedy that would keep Marco's family together," said Heintzelman. "Their deceit and lack of integrity resulted in a state sponsored kidnapping which is tearing his family apart."

"What this has done is broken trust," said Lyons. "Every attorney, every person asked to check in with the Phoenix ICE office has a right to be wary. This action shows that in the Phoenix office, the word of ICE officers can't be trusted. They used lies and deceit, to accomplish this, a scheme that threw the integrity of junior officers under the bus."

Lyons said there was no forewarning that deportation was about to happen. In fact, Misael Perez, another immigrant who has spent time in sanctuary at Shadow Rock, faced the same scenario just a few days prior, and was fitted for an ankle bracelet. 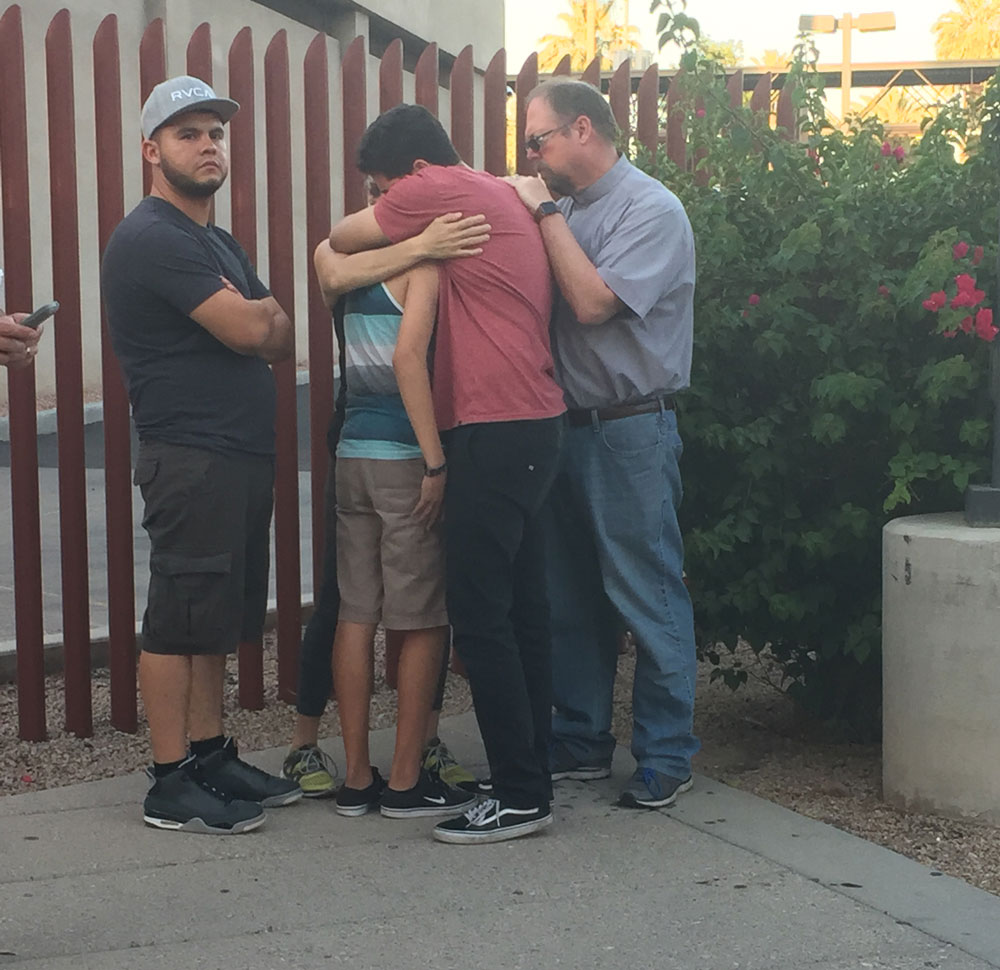 As the word of Coss' deportation spread, his wife, daughter and two sons were supported by UCC clergy, Walt Emrys Staton from the Unitarian Universalist Church of Phoenix, other members of the Arizona Faith Network, and several teenagers who learned about the issue on social media.

"One of the touching moments was when a group of young people came as a group to connect with Marco's teenage son," Lyons said. "They told him 'We are here to support you because they don't want this to happen to any other family.'"

Heintzelman issued a call this morning to other liked-minded people in the Phoenix community. "We invite others to share of vision of a better America that is characterized by hospitality for the immigrant and refugee to join us (outside ICE offices today)," he said. "We will do our best to welcome you and explain our commitment to stay with families like Marco's in front of a place that rejects the value of hospitality and denies the added value that immigrants and refugees bring to our community."

Those holding the vigil are resolved to spread that message, urging their congregations to contact ICE, and planning to stay camped outside the ICE office gates all day. They are allowing ICE officers and others to pass through, and local police have left the area, unwilling to make any arrests.

"If they lie to an attorney and to someone in compliance with all that is asked of him, when will they lie to me? When will they lie to you? Without trust and truth, democracy falls," Lyons said. "What has been perpetrated against Mr. Coss is not the way of God. ICE's actions were cowardly and evil actions that violate the rights of our most vulnerable friends and neighbors from the darkness of deceit."