The coronavirus changed their strategy, but the people of South Euclid (Ohio) United Church of Christ are still serious about getting their community to answer the 2020 census. 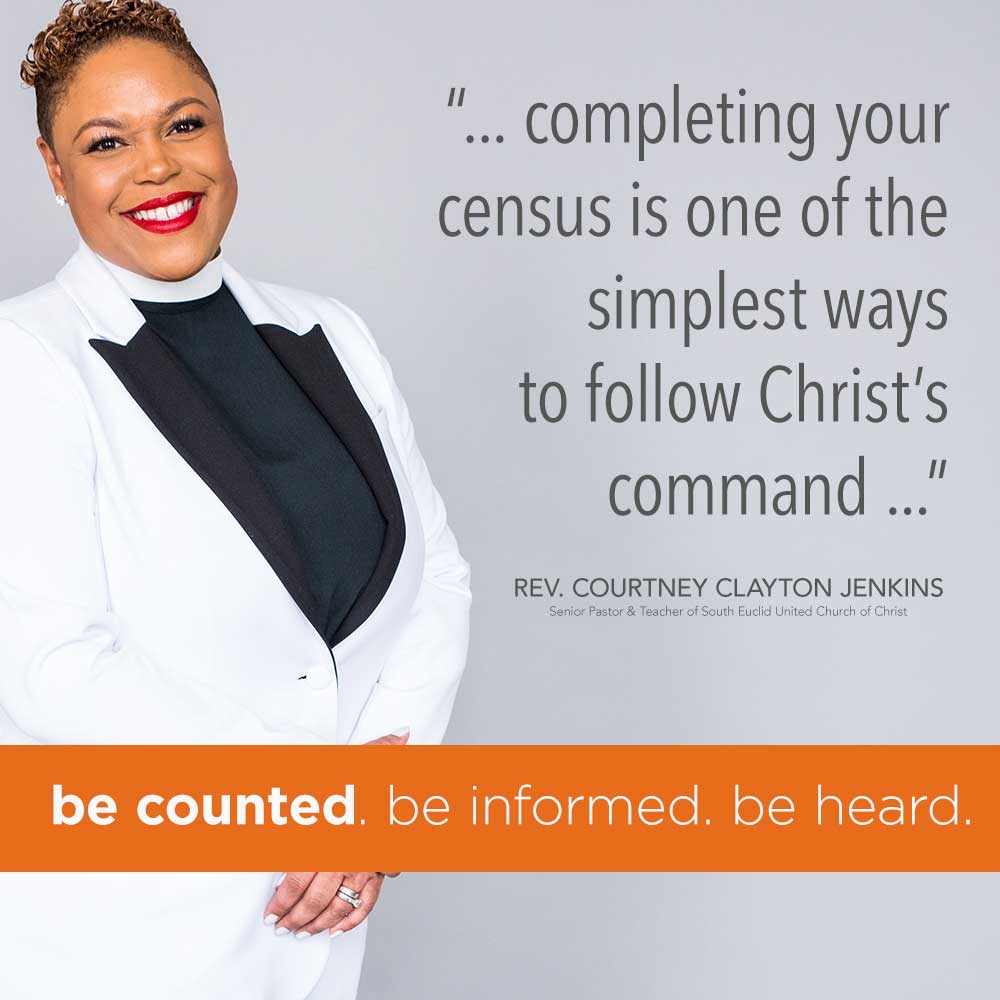 Before COVID-19 shut things down, they had planned to hand out fliers and census pledge cards – not only at church, but throughout their predominantly African American neighborhoods. They were setting goals for how many people to reach. They were ready to take mobile devices into barbershops and beauty salons to invite patrons to be counted then and there.

Now most businesses are closed under Ohio's "stay at home" order, and at South Euclid, as with most churches, in-person worship is suspended in favor of services streamed online.

Nonetheless, those watching the church's March 29 Facebook Live service -- which, within 24 hours, had more than 3,500 views and more than 500 comments -- heard a census reminder from the Rev. Courtney Clayton Jenkins, senior pastor, just three days before the official U.S. Census Day, April 1. During announcements, she said it had taken her about two minutes to complete the census online, and she encouraged everyone listening to do the same.

Using any means available, the church is keeping up efforts to spread its message: in a census year, much is at stake for the whole community.

What is at stake

"Part of our job is to rewrite the narrative," Jenkins said. She said a 2019 speech by former gubernatorial candidate Stacey Abrams awakened her to how white communities tend to answer the census – and to "the way in which, in particular, black and brown people remain suspicious of the census, but how it fuels the resources that are desperately needed."

As noted at the official census website, the once-a-decade population count "will show where communities need new schools, new clinics, new roads, and more services for families, older adults, and children … The results will also inform how hundreds of billions of dollars in federal funding are allocated to more than 100 programs, including Medicaid, Head Start, block grants for community mental health services, and the Supplemental Nutrition Assistance Program."

The census also decides the number of seats each state has in the U.S. House of Representatives and how congressional and state legislative districts are drawn – something that connects with two other ministry emphases at South Euclid: voter education and voter registration. 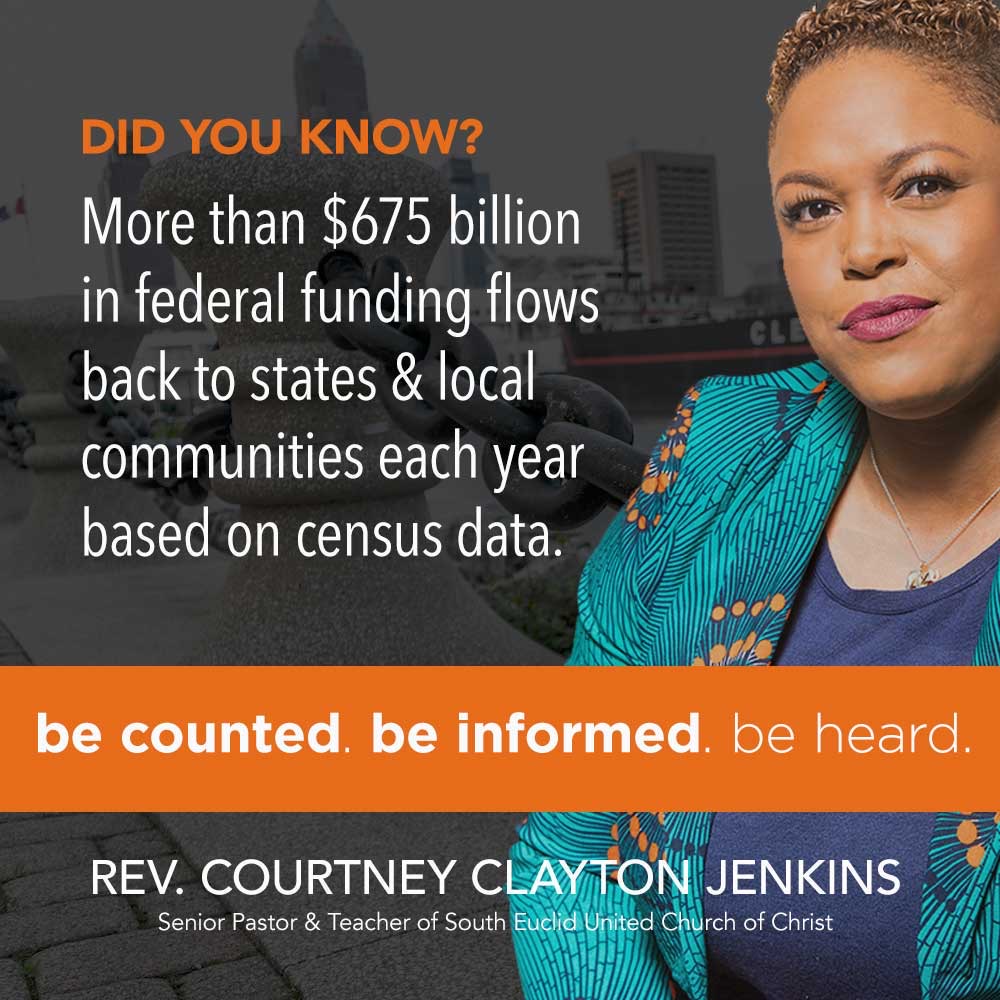 But for some people of color, Jenkins said, that knowledge isn't enough to overcome suspicion that the government will use the census process to spy on them. She tries to overcome that with "common-sense conversation."

"Number one, if you have a cell phone, the government already knows a whole lot about you," Jenkins said she tells people. "Everybody already has a digital thumbprint." Among other things, she also stresses that the census mainly seeks the number of people living at a given address, and that there are laws to protect them, to keep census-related information from being used against people.

She said she tries to make it real for people with statistics such as this: on average in the U.S., a community stands to lose $1,800 in certain services for every person not counted in the census, and children, often undercounted, are among the most affected.

Follow-up to continue for months

April 1 remains the date of reference for how many people are living at an address, but the government on March 21 announced some modifications and extensions to the follow-up process. So South Euclid will continue encouraging people to be counted through social media and possibly with other kinds of campaigns this summer and fall as the government follows up with people who haven't yet answered.

One social media tool is a Feb. 28 video Jenkins made with seven other pastors from Cleveland's East Side and its surrounding suburbs – including another UCC minister, the Rev. Paul Sadler Sr., pastor of Mt. Zion Congregational UCC. All the pastors have shared the video on their social media channels. It's accompanied by a quote from the Book of Proverbs: "Speak out on behalf of the voiceless, and for the rights of all who are vulnerable. Speak out in order to judge with righteousness and to defend the needy and the poor."

In it, the pastors surround Jenkins as she says, "The Bible tells us over and over again that we must stand for the least, the lost, the lonely and the left out. What we do know is that over and over again folks in suburbs fill out their census. But I want to let you know right now that if you have not completed your census, you're missing a minimum of $1,800 per person in the community … So I want you to know this is a system that can be trusted. You have rights, you are protected. But what we need each other to do as community is to be counted. Step up! Make your voice count. It's time to be heard."

It's a sentiment echoed by Sandy Sorensen, director of the UCC's advocacy office in Washington, D.C. "Our faith teaching reminds us that every person carries, within, the image of God and deserves to be represented in the census count," Sorensen said. "Communities of faith are critical in making sure that historically undercounted communities are in fact counted, such as people living in poverty, children under the age of five, immigrant communities, American Indians and Alaska Natives, Latinos, African Americans and Asian American/Pacific Islanders. The 2020 Census is our chance to shift the historical narrative that has excluded so many from being counted for so long, and move to a more vibrant, inclusive picture of 'we the people.'"