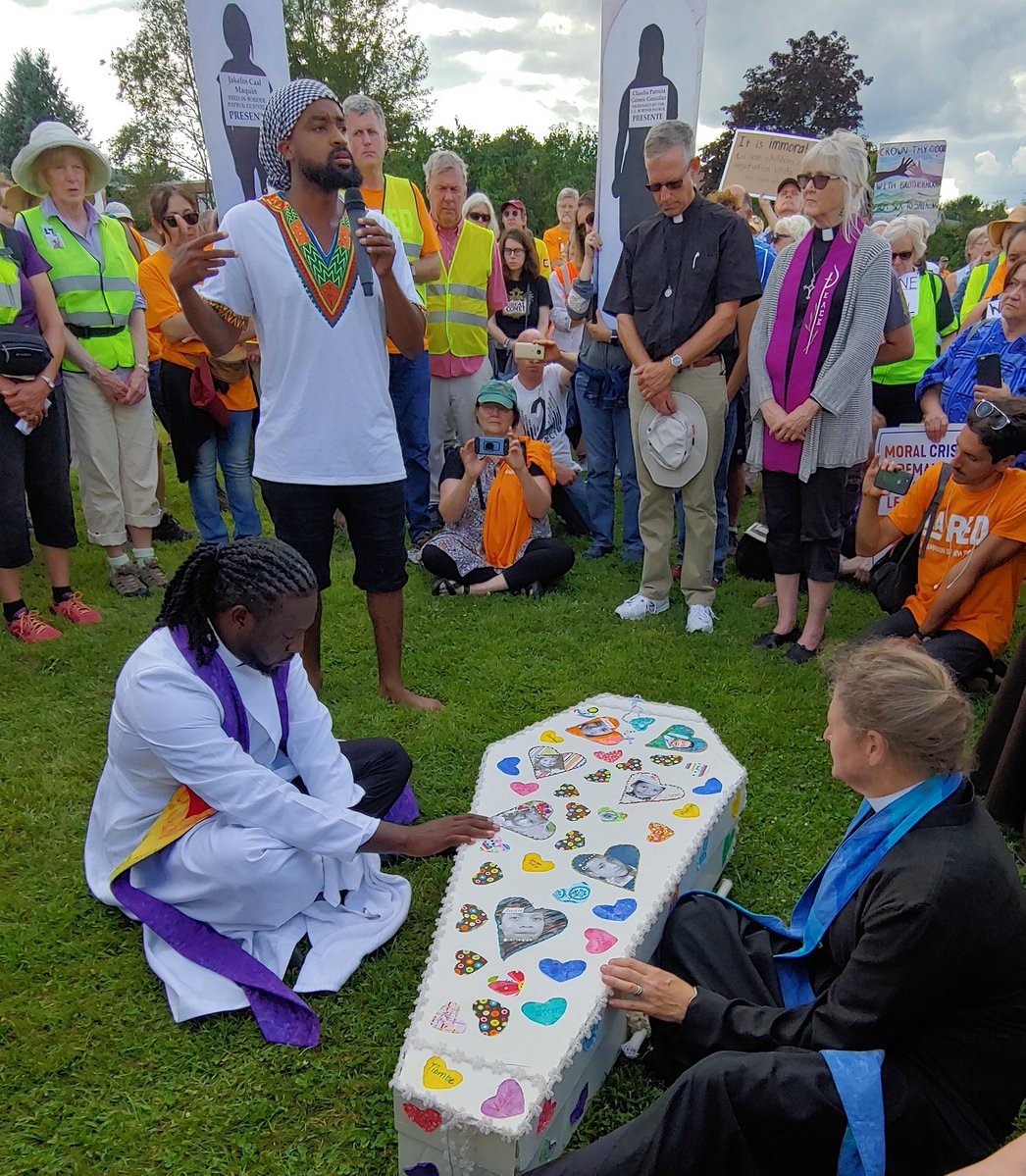 United Church of Christ people were among activists from four New England states – and from several religious traditions – who walked long miles to a federal detention center in Dover, N.H., protested U.S. immigration policies and waved to appreciative detainees.

The march began with a ceremony in Boston Aug. 19 and ended Aug. 24 with another in Dover, 78 miles away. At the center of the action throughout the week was a symbolic white coffin bearing names and pictures of seven migrant children who have died in recent months while in custody of U.S. Immigration and Customs Enforcement.

Along the route – which included housing stops at UCC and other churches in Massachusetts and New Hampshire – the activists chanted, sang, prayed and called for an end to detentions and deportations until the U.S. reforms its immigration policies.

In Dover, "the idea of the vigil was to situate ourselves where those inside the jail could see us," said the Rev. Gordon Rankin, Conference Minister of the UCC's New Hampshire Conference. "And see us they did. As we'd pray and sing, those inside would rap on the windows to get our attention and then wave." The Conference has an active support group for immigrants and refugees and takes part in regular ecumenical support vigils where asylum hearings are held. He said he hoped this vigil at the jail itself provided an additional "beacon of light – a sign of hope - to those who currently found themselves in darkness. My prayer is that they knew that we saw them with the eyes of love and that the words of our songs and prayers were that God's justice would soon come." 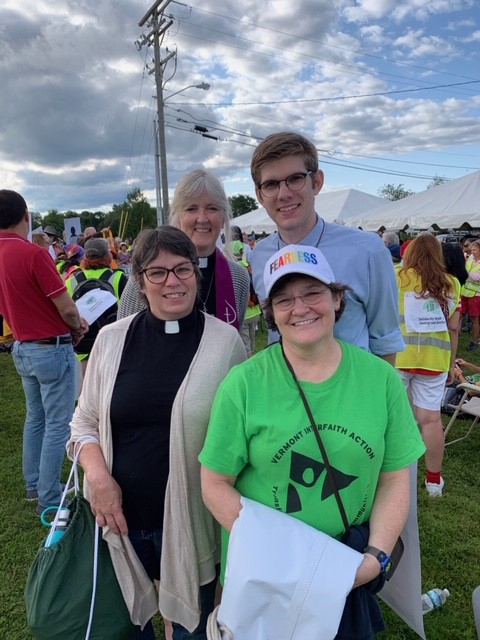 "The walk has changed me," said the Rev. Joan MacPherson, pastor of Main Street Congregational UCC, Amesbury, Mass., who, along with church member Debbie Rider, marched the whole way. "The weightiness of these young deaths and the ongoing dehumanizing of our sisters and brothers who happened to be born in another country is something the church cannot remain silent about. Seeing the church people respond to an unknown number of guests, showing up at an unpredictable time – and local businesses and drivers-by that stopped, supported, offered a place to rest – all these responses remind me that love is present and spreading. May this move us to spread it further and stop the family separations, the detentions and deportations until Congress acts for just immigration reform."

The Rev. Lise Sparrow, pastor of Guilford Community Church, was in a group of four UCC clergy from Vermont who joined the walk at Maranatha Indonesian UCC in Madbury, N.H., for the last five miles into Dover. "While the ritual in Dover was itself heart-breaking, for me the deepest and most profound moment was when we, hundreds of us, stood along the fence of the detention center, sang and waved to the detainees through small windows," Sparrow said. "You could see them through narrow windows, waving back, and hear them singing along. This continued for close to 30 minutes with us all swaying together."

The Rev. Debbie Ingram, executive director of Vermont Interfaith Action, was another of the four. "I participated because our faith tradition calls us to radical hospitality, showing love, compassion, and justice to all who seek to escape oppression and begin a new life of hope and freedom," said Ingram, who is also a Vermont state senator.

"Our current immigration system does not honor that aspect of our faith, and instead treats those seeking a better life with suspicion, prejudice and inhumanity - even going so far as to separate children from their parents. I joined with other people of faith to show that I find that treatment unacceptable and to demand that our national leaders change it."